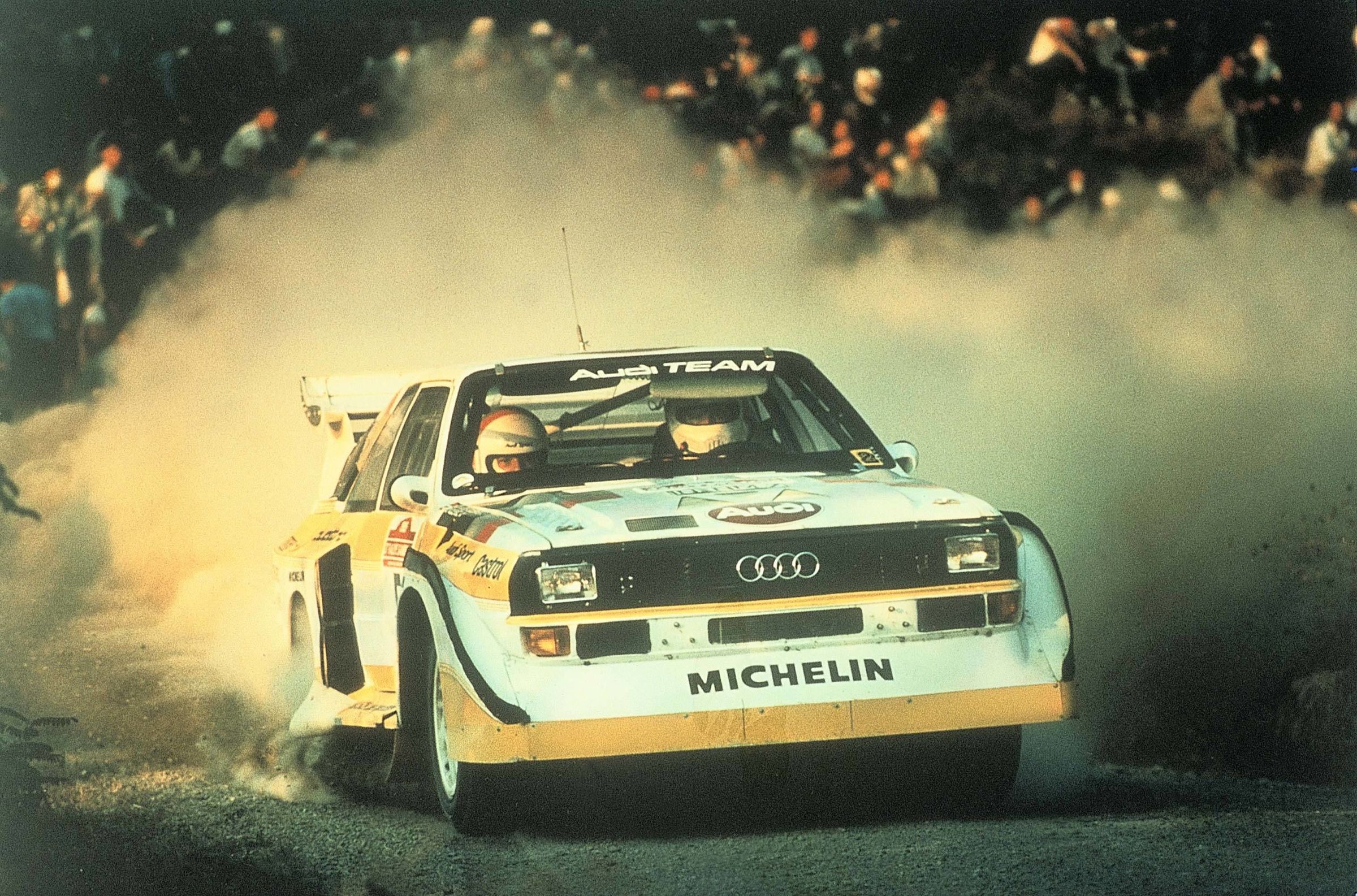 Audi positions itself as the sportiest manufacturer in the premium segment and has a perfect basis to do so: motorsport. Sportiness, advanced technology and emotive design are the basis for the success of the Audi brand. The genes for this have their origin in racing, since 1980.

Excluding the era before the Second World War that included the legendary Auto Union Grand Prix race cars in the 1930s, the motorsport history of AUDI AG began with the Audi quattro. The dominant victories and two manufacturers’ and two drivers’ titles achieved with the “original quattro” in the World Rally Championship between 1982 and 1984 were an important factor in the market success of the quattro drivetrain.

After Audi had turned rally racing upside down and stormed up Pikes Peak (USA) with the Sport quattro in record time on three successive occasions, Audi also made the quattro drivetrain fit for circuit racing: initially with the Audi 200 quattro and the Audi 90 quattro IMSA GTO in the United States, in 1990 and 1991 with two championship titles for the Audi V8 quattro in the German Touring Car Championship (DTM), and ultimately also with the A4 in the production-based super touring cars. In 1996, the Audi A4 quattro won the championship titles in seven countries. Between 2012 and 2016, the all-wheel drive system returned to the race track as the e-tron quattro.

After the dominant quattro drivetrain was banned from touring car racing, Audi switched to sports prototypes and also underpinned its slogan “Vorsprung durch Technik” in this motorsport category for 18 years. Audi, on making its debut at Le Mans in 1999, the toughest endurance race in the world, immediately managed the leap onto the podium, finishing third overall. In the following years, the Audi R8 was in a class of its own. From 2000 to 2002, Audi achieved a historic hat-trick, not least thanks to the TFSI technology that debuted in 2001 and then also subsequently made its way into production. In 2004 and 2005, customer teams clinched two further overall victories for Audi. The R8 secured its spot in motorsport history with a total of 63 victories in 80 sports car races.

Following Laurent Aiello’s victory with the Abt-Audi TT-R in 2002, Audi returned to the DTM with a factory-backed commitment in 2004 and instantly won the title with Mattias Ekström. In 2007, the Swede triumphed again, followed by Timo Scheider in 2008 and 2009, making Audi the first and so far only automobile manufacturer in DTM history to have managed a title hat-trick. In the 2011 season, Martin Tomczyk completed the success story of the Audi A4 DTM with another title, the fifth in total for the Audi A4 DTM. In 2013, Mike Rockenfeller, diving the Audi RS 5 DTM, clinched the ninth DTM title for Audi. René Rast caused a sensation in 2017 when he clinched another title for Audi in his rookie year. Audi took home the manufacturer’s championship crown in the same year. In 2019 and 2020, Rast won the prestigious title two more times. Audi drivers have thus already won the DTM drivers’ title twelve times. Added to this are six manufacturers’ and eight teams’ titles. Technologically, Audi has mastered one of the biggest upheavals in the history of the racing series with flying colors: In the two years of the DTM turbocharged engine era, the Audi RS 5 DTM, with its highly efficient two-liter turbo engine, was the benchmark with 28 victories, 95 podium finishes, 29 pole positions and 28 fastest race laps, as well as all six of the championship titles. Since 2021, the DTM has been exclusively held for GT3 sportscars. Audi Sport customer racing is in charge of the entries.

With TDI technology, Audi achieved a pioneering feat and, at the same time, demonstrated “Vorsprung durch Technik” once again. In 2006, the Audi R10 TDI featuring a new concept was the first sports car with a diesel engine to triumph in the legendary Le Mans 24 Hours. In total, TDI technology came out winning eight times at Le Mans. In 2007 and 2008, Audi was again victorious with the R10 TDI at La Sarthe. In addition, Audi won the American Le Mans Series with the diesel-powered racing sports car three times in succession and, in 2008, the European Le Mans Series as well. With the R15 TDI in 2010, Audi celebrated a one-two-three result in the fastest Le Mans race of all time and set a new distance record that has not been broken to date. In 2011, 2012, 2013 and 2014, Audi TDI power was again victorious at Le Mans. In 2014, the brand celebrated its 13th victory in just 16 participations. Audi also demonstrates “Vorsprung durch Technik” in terms of energy efficiency. During the entire TDI era, Audi reduced diesel consumption by a total of 46 percent within the space of one decade.

On clinching the first victory with a hybrid race car in the 2021 Le Mans 24 Hours, Audi achieved another pioneering feat in the world’s most important endurance race. The Audi R18 e-tron quattro remained unbeaten at Le Mans for three consecutive years (2012, 2013 und 2014). Many other innovations such as Audi Laser Light have been added to these pioneering feats in technology. The drivers’ and manufacturers’ titles won with the hybrid sports car in the 2012 and 2013 FIA World Endurance Championship (WEC) complete the track record in Audi’s sports car era that ended in 2016.

Since 2009, Audi has been using its most competitive products to chase trophies worldwide in customer racing with production-based technology. The Audi R8 LMS is available in its second generation in variants for the GT2, GT3 and GT4 categories. The Audi RS 3 LMS is a TCR touring car that also already exists in a second generation for racing and competes on five continents. Since the start of the program, customers worldwide have won several hundred racing titles. Outstanding individual successes include two class victories for the GT3 sports car at the Daytona 24 Hours, three overall victories at the Bathurst 12 Hour, four triumphs on the Macau road race, as well as in the Spa 24 Hours and already six victories in the Nürburgring 24 Hours.

The company is systematically continuing the electrification process of its motorsport program, which began in endurance racing in 2012. Following the LMP program with the R18 hybrid sports car, Audi was the first German car manufacturer to compete in the all-electric Formula E racing series in the 2017/2018 season. With four victories and a total of eleven podium places, Audi Sport ABT Schaeffler clinched the teams’ championship title after twelve races. The brand with the four rings will be competing in the famous Dakar Rally with an innovative prototype since 2022. For the first time, the alternative drivetrain concept combines an electric powertrain with a high-voltage battery and a highly efficient energy converter. Rally raids form the spearhead of the factory’s motorsport commitment.