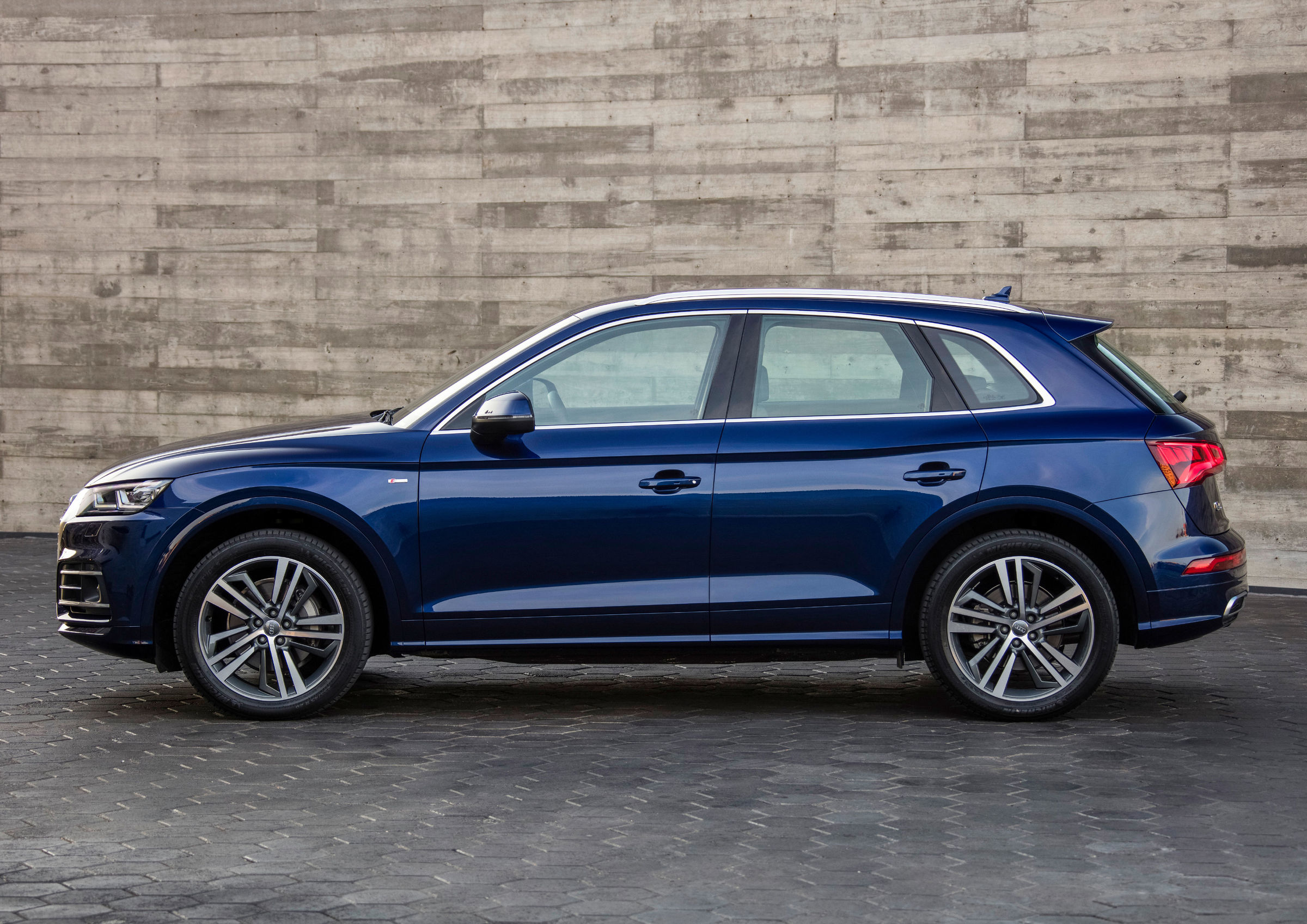 Its masculine-sporty character is striking at first glance. The front of the Q5 is relatively low and marked by horizontal lines; the Singleframe also has a horizontal structure. A powerful frame in aluminum look runs up to the headlights and emphasizes the dominance of the Singleframe grille.

The contours that give structure to the engine hood begin at the upper corners of the Singleframe; the two outer contours run up to the A-pillars. The hood wraps over the upper edges of the fenders. Under the radiator grille are the air intakes; the outer ones are structured by unobtrusive cross bars. Detailing of the air intakes differs by equipment line – sport and design, S line sport package, design selection or S line exterior package. In the sport line, the bumper is painted in the body color, while in the design line it is finished in an offsetting gray color. In the S line exterior package, it has a unique design in the body color.

The headlights of the new Audi Q5 have a low-profile and slightly wedge-shaped form. Xenon plus units are standard; LED headlights and Matrix LED headlights with dynamic turn signals are offered as alternatives. Both of these options come with a light/rain sensor and special lighting functions – for turning, for the expressway and for adverse weather. The dynamic, powerful lines of the light signature generate the brand-typical sporty and focused look of the Audi Q5. A special satin finish gives it a sculptural “ice block” look. The upper light conductor also serves as the turn signal.

The very bright and homogeneous high-beam light of the Matrix LED headlights is produced by 16 individual LEDs on each side. After passing through primary lenses, they radiate their light from three specially formed reflectors. The control unit communicates with a camera in the rear view mirror and individually switches them on or off or dims them over 64 steps according to the situation. As a result, the Matrix LED headlights always illuminate the road excellently without causing glare to other road users.

The Matrix LED headlights come with additional functions. To avoid causing glare from light reflecting back from highly reflective traffic signs, it reduces lighting power in the zone of specific sign. The cornering light of the headlights is produced by shifting the light focus – in cooperation with the optional MMI navigation plus system briefly before steering into the curve. The intersection light function, which is also navigation based, helps to detect hazards or obstacles in intersection or turning zones. The dynamic turn signal light is generated by lighting LEDs sequentially. It runs from inside to out, communicating the action very clearly to the environment.

Coupé-like look: the side view

In a side view, the flow of lines makes the sporty character of the new Audi Q5 very clear. The roofline is crowned by flat roof rails, and it descends early towards the rear, while the lower window edge curves upward shortly before the C-pillar. The low greenhouse tapers inward towards the rear, and the D-pillars are angled like on a coupé.

The greenhouse is supported by a muscular body, and a distinctive, sharply undercut shoulder line gives it structure. It begins as the engine hood seam at the corners of the headlights and sweeps back in an elegant curve towards the rear, where it runs out into the upper edge of the tail lights. On the flanks, various surfaces create an interplay of light and shadow.

Significantly flared wheel arches are a reference to the quattro drive and Audi DNA. In the design line, the inner segments of the wheel panels are offset in structured gray. In the lower areas of the doors and side sills, trim strips in aluminum look set accents. The angular exterior mirrors are mounted on the door shoulders and underscore the sporty look of the new Audi SUV.

Horizontal lines also emphasize the car’s width at the rear. A roof edge spoiler – which takes on a special design in the S line exterior package – casts a shadow over the low-angled rear window. The tailgate wraps around the D-pillars – a typical design feature of the Q models from Audi. The tail lights are located fully in the upper widely drawn-out area of the tailgate, and this enables a homogeneous design without breaks. When the tailgate is open, additional lights in the bumper assume the lighting functions of the upper lights.

The rear lights of the new Audi Q5 are wedge shaped. The cover glass flows around the sculpturally formed tail light elements and embeds the light into the rear architecture in three dimensions. The line beneath the tail light serves as a turn signal or a dynamically swiping turn light (from LED headlights). The rear lights consist entirely of LEDs as a standard feature.

Like its counterpart at the front, the rear bumper differs according to the equipment line. In the lower area, it integrates the two tailpipe trims of the exhaust system, which are shaped as low-profile trapezoids. In the S line exterior package, they are joined to one another by a trim piece in aluminum look, and there is an insert with a honeycomb screen.

At the launch of the new Q5, Audi will be adding a special equipment package known as Audi Q5 S line black. The exterior paint is quantum gray, and the lower zones of the body are offset subtly in Manhattan gray. At the front and on the side windows, the titanium black styling package from the Audi exclusive range adds accents such as black exterior mirrors. The equipment package, which will only be available for a limited period, will include 20- or 21-inch wheels.