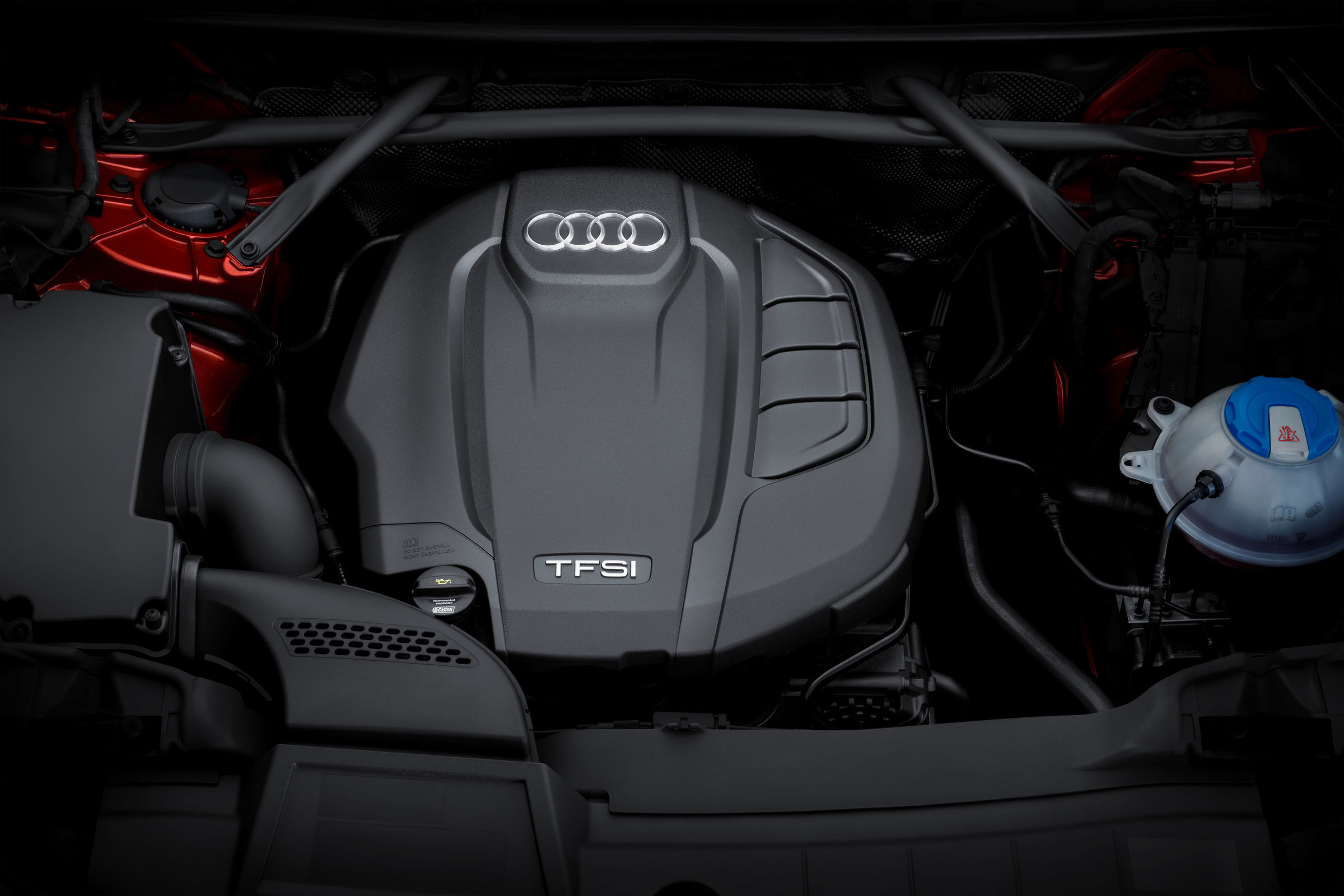 At the sales kick-off of the new Q5, Audi is offering five refined, powerful and highly efficient engines: four TDIs* and one TFSI*. They cover a power range from 110 kW (150 hp) to 210 kW (286 hp) – up to 10 percent more than in the previous model. At the same time, fuel economy has been significantly improved.

All engines in the new Audi Q5 conform to Euro 6 emission limits. There is a standard 12-liter (3.2 US gal) tank for the additive AdBlue. A 24-liter (6.3 US gal) tank is available as an option. The further advanced start-stop system can already deactivate the engine at driving speeds below 7 km/h (4.3 mph) while coasting to a stop (3 km/h (1.9 mph) in the Q5 3.0 TDI).

The 2.0 TDI* delivers many technology features. It has two balancer shafts, a cylinder pressure sensor and a common rail injection system that builds pressure up to 2,000 bar. Internal friction is low, and the oil and water pumps operate with demand-based control. High and low-pressure exhaust gas recirculation and sophisticated emissions control including an SCR system (SCR: selective catalytic reduction) keep hazardous emissions low.

The two cylinder banks of the six-cylinder engine are offset 90 degrees to one another. A balancer shaft rotates in the cylinder crankcase, which consists of high-strength yet lightweight vermicular graphite cast iron. The rigorous lightweight design concept by Audi also pays off in terms of efficiency, as do the reduced friction of the piston rings and bolts and the variably regulated oil pump.

The thermal management system partitions the circulation loops for the cylinder crankcase and the cylinder heads from one another and supplies each with coolant such that the engine comes up to its operating temperature quickly after a cold start.

The newly developed turbocharger of the 3.0 TDI builds up an absolute charge pressure of up to 2.3 bar. Its variable turbine geometry (VTG) was designed for low flow losses, and the engine responds spontaneously to throttle inputs. The external low-pressure exhaust gas recirculation (EGR) first extracts the exhaust gas after the particulate filter. This makes it possible to drive the turbocharger with the entire exhaust mass stream, which boosts efficiency in all operating zones.

The common rail system has a pressure level of up to 2,000 bar; the piezo injectors with their eight-hole nozzles can inject up to nine times per work cycle. Modifications to the intake ports – the one is designed for tumble and the other for filling – and the exhaust ports further improve air throughput.

The two emission control components are positioned very close to the engine. The first is a large NOx oxidation catalytic converter. It stores nitrogen oxides until it is full. It is cleaned by enriching the fuel-air mixture in the engine. To minimize the associated higher fuel consumption, it is only used at low exhaust gas temperatures. In all other situations, the second component handles NOx conversion: the diesel particulate filter with an SCR coating.

The re-engineered 2.0 TFSI* with its 1,984 cc of displacement is a high-tech engine. Highlights of the four-cylinder engine are integration of the exhaust manifold into the cylinder head, the rotating core module for the thermal management system, the Audi valvelift system (AVS) for the exhaust valves, the turbocharger’s electric waste gate and dual injection, in which indirect multipoint injection supplements FSI direct injection at partial load. These components increase power, lower fuel consumption and emissions and improve throttle response.