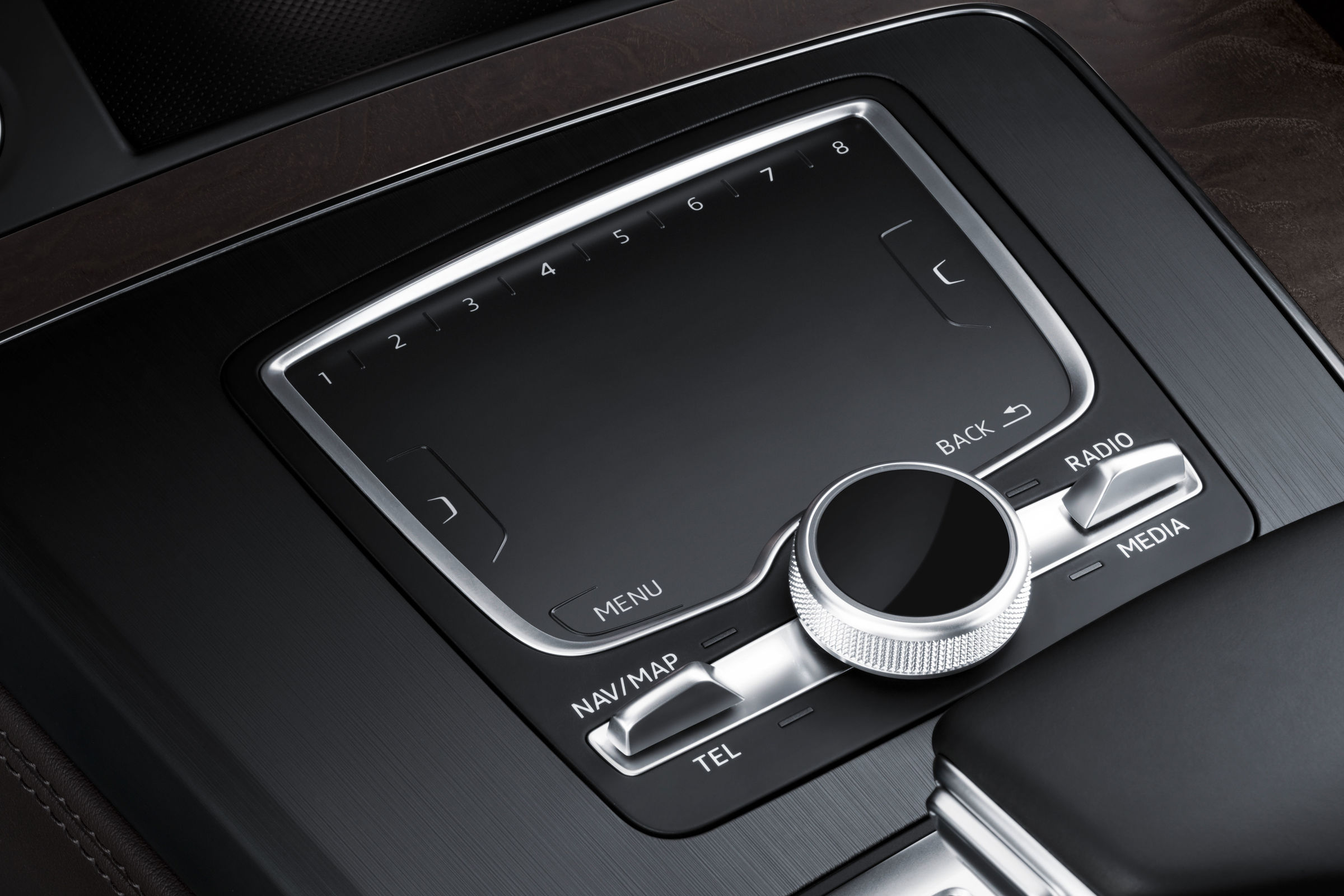 Audi has set a new standard in the automotive industry with the fully digital virtual cockpit and the new MMI operating concept. Both technologies are also available as options for the Q5.

The instrument cluster and the Audi virtual cockpit

The standard instrument cluster in the Audi Q5 has analog scales. The driver information system display is located between the large round instruments. It is available in two versions – monochrome with 5-inch or color with 7-inch diagonal (standard with design selection). Even more attractive is the optional Audi virtual cockpit – a TFT display with a 12.3-inch diagonal and 1,440 x 540 pixel resolution. It shows intricately rendered graphics.

The driver can switch between two views by pressing the “View” button on the multifunction steering wheel. In Infotainment mode, a central window dominates the view – it provides a lot of space for the navigation map or lists from the Phone, Radio and Media areas. The tachometer and speedometer are displayed as small round instruments on the right and left. In a second, classic view, they appear about as large as analog instruments, and the middle window is smaller.

The Audi virtual cockpit is operated from the multifunction steering wheel plus. Using switches on the left steering wheel spoke, the driver pages through the menus for the on-board computer, audio system, and – depending on the installed features – for the phone and navigation. Located on the right side of the steering wheel are the volume roller, the voice control button, express phone controls and the skip function for quickly changing the radio station or song.

The MMI control element is located on the center console of the new Audi Q5. Its design and position vary according to the specific infotainment system and transmission that are installed. With a manual transmission, the selector lever is in front of the MMI terminal. In versions with S tronic or tiptronic, the terminal is placed close to the instrument panel; the low position of the automatic selector lever offers comfortable support for the wrist.

In interplay with the automatic transmission, there is a large touchpad, MMI all-in-touch, which has a nearly rectangular operating screen that is 110 x 80 mm (4.3 x 3.1 in) in size. The driver can enter characters or perform multi-finger gestures here, to zoom in on the map, for example. Each input is confirmed by acoustic and tactile feedback – with a click that is also felt on the finger.

The innovative MMI search makes it easy to find music titles, phone contacts or navigation destinations. All it takes is a few letters to have the first hits shown in the results list. Here, the system considers the current location of the Q5 and recent activities in the MMI.

All other functions can be controlled with the rotary push-button control which enables scrolling, clicking and moving. Two rocker switches in the MMI terminal call up the main functions directly; with MMI all-in-touch there are also eight user-programmable buttons. MMI operation is completed by a functional menu and an options menu. For example, in the radio menu the driver can select the frequency band, or call up traffic information in the map menu. Under Navigation, the driver can be directed to an input destination and have parking places in the vicinity displayed.

Another highlight is the intensively further developed, user-friendly and intuitive voice control feature. The driver no longer has to be constrained to rigidly defined voice commands – in many languages the system understands expressions from everyday speech. In the Phone menu, for example, the driver can call a contact just by saying “I want to call Peter Miller.” or “Connect me with Peter Miller.”

The MMI display takes a central position on the instrument panel. It looks like a high-end tablet computer with its black display glass that is rounded at the corners. In the top version with MMI navigation plus, the display has a silver-colored frame made of magnesium. Supplementing voice control and the MMI terminal in the new Audi Q5 is the multifunction steering wheel plus – a third user interface.

Everything important within view: the head-up display

Audi can deliver a newly developed head-up display as an option. It projects relevant information onto the windshield – including from driver assistance systems – as symbols and numbers that can be perceived quickly. A TFT screen generates the color image while two mirrors enlarge it and redirect it. The system compensates for distortions that would otherwise be produced by the glass geometry.

The information appears to hover around two meters (6.6 ft) in front of the driver within a window area measuring 200 x 80 mm (7.9 x 3.1 in). The human eye registers the information very quickly – there’s no need to switch from the accustomed long-range vision. The driver can use the MMI system to specify which information should be shown on the screen; the height and brightness of the display can also be set.