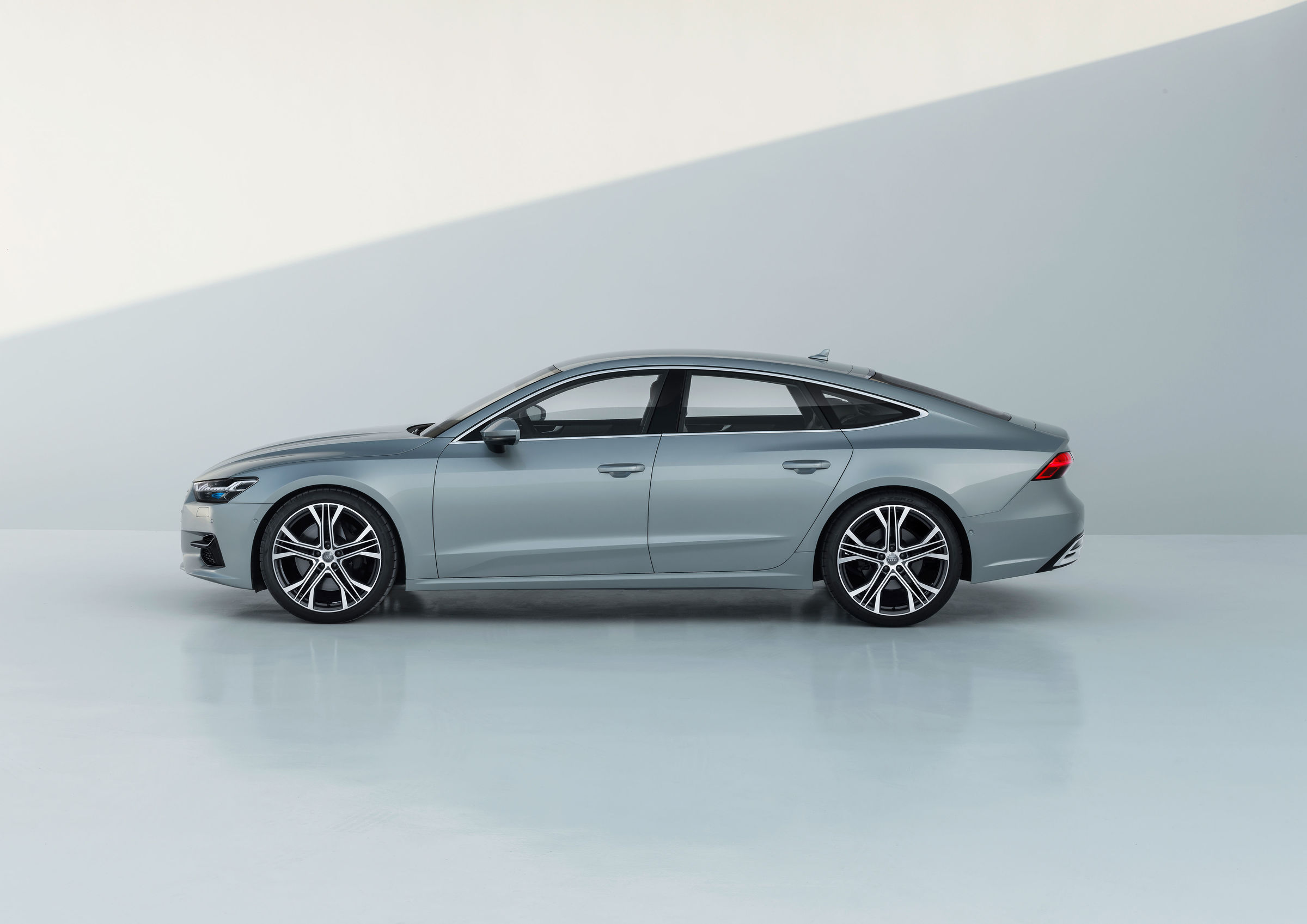 The hallmark design of each new Audi luxury class model is based on a characteristic leitmotif. While the Audi A8 embodies prestige in its design, the design language of the new A7 stands for pure progressiveness. This is implemented systematically, right down to the smallest detail.

Even more so than on the outgoing model, the Singleframe grille dominates the front-end of the new Audi A7 Sportback. Positioned wider and lower, it expresses the sporty character of the four-door coupé at first glance. All the adjoining surfaces and lines radiate out from the grille, such as the contours on the engine hood and the flat headlights. The calm, horizontally aligned contour of the headlights provides space for a spectacular lighting design.

The outer edges of the vehicle front-end tilt forward, similar to the bow of a yacht. The three air inlets in the front apron – two large outside, one flat in the center – underscore the sporty character of the new Audi A7 Sportback. Strong contours, which are reminiscent of the front splitters on a racing touring car, form the bottom edge of the outside inlets. Two boomerang-shaped bars and a honeycomb grille structure their insides while also reinforcing the impression of three-dimensional depth. The outer edges of the air inlets are cut at an angle, creating presence and visually giving the Gran Turismo its firm stance on the road.

The side view is a dialog of taut lines and convex surfaces. The low-set shoulder line that runs around the entire car lowers the optical center of gravity of the A7 Sportback. Around a hand’s width above is the shoulder line, which is hidden above the doors. It extends from the headlight, runs to the corner of the rear light and forms powerful muscles above the wheel arches with a taut edge. They pick up on the classic “blisters” of the Audi Ur-quattro and translate them into the design language of progressive elegance.

The transition of the D-pillar is a force focal point in the design of the new Audi A7 Sportback. The side window area incorporates a third side window that tapers upwards – a throwback to the Audi 100 Coupé S from 1970. The belt rail line that rises toward the rear lends the A7 even more dynamism.

The interplay of the sharp edges and soft lines is continued in the fillet, which adds a pronounced highlight to the lower section of the doors. It starts with a gentle downward sweep, then runs outward in a tight radius, forms a hard contour and is then once again drawn inside sharply. The sill theme is continued in the door design and forms a coherent link to the rear with its lines.

Like on a yacht, the rear of the Audi A7 Sportback tapers in. The classic boat stern motif from the outgoing model is even more pronounced in the new generation: The top rear edge is approximately three centimeters higher than on the predecessor. This measure creates a sportier look as well as enhanced aerodynamics. The tailgate features a spoiler, which extends electrically at high speeds.

The strong play of light and shade underscores the highly contemporary rear section. The lights form part of the sculpture and lend even more width to the rear. In all areas the rear-end has a pronounced three-dimensional shape. The luggage compartment lid ends in a striking, stylishly curved contour, which shades the four Audi rings, the rear lights and the connecting light strip. Elegant chrome elements in the anthracite-colored diffuser also accentuate the rear’s sensation of width.

The new Audi A7 Sportback is largely devoid of chrome. The six louvers in the Singleframe grille are painted in high-gloss black; its frame is extremely narrow. The optional S line exterior package hones the sporty look even further – with special solutions for the front bumper, the air inlets, the side sills and the diffuser insert.

The paint range offers a choice of 15 colors, including eight new tones. The “colors-in-between” – mixtures of several colors whose appearance varies depending on how the light strikes them – lend the new Audi A7 Sportback an elegant aura. The two solid paint finishes are ibis white and brilliant black. The metallic and pearl effect colors are Daytona gray, floret silver, glacier white, carat beige, mythos black. New additions to the color palette include Avalon green, firmament blue, Navarra blue, Seville red, Soho brown, typhoon gray, Triton blue and Vesuvius gray. The new Audi A7 Sportback, which comes off the production line in the Audi Neckarsulm plant, is also available optionally with a customized paint finish – here the customer can select the color of their choice.