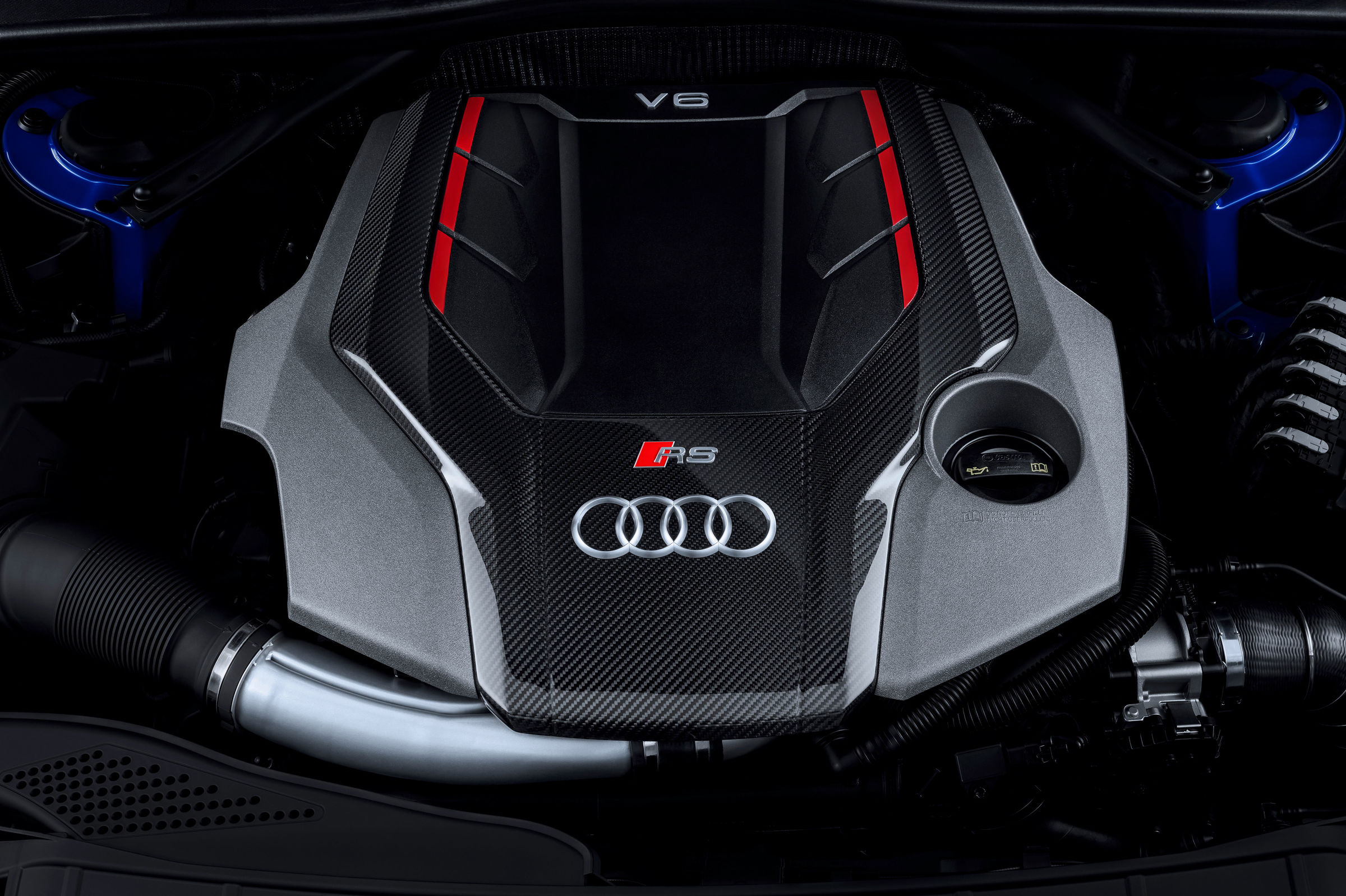 Typical Audi: Exhaust side inside, intake side outside
The two turbochargers of the 2.9 TFSI are each arranged on a cylinder bank, and generate up to 1.5 bar of charge pressure. As with all new V6 and V8 engines from Audi, the turbochargers are mounted at a 90-degree angle to the cylinder banks, which means that the exhaust side of the cylinder heads is inside, and the intake side is outside. This layout enables a compact design and short fuel paths with minimal flow loss – the 2.9 TFSI reacts extremely spontaneously to the movements of the right pedal.

Efficiency technology: The B-cycle combustion process
The high-performance V6 not only impresses with its strong performance, but also its efficiency. In the new European driving cycle, the vehicle uses just 8.8 liters of fuel per 100 kilometers (26.7 US mpg), equivalent to 200–199 grams of CO2 per kilometer (321.9–320.3 g/mi). These values represent a 17% reduction in fuel consumption compared with the previous model. A key reason for this is the new TFSI combustion process from Audi called the B-cycle process. This is specially designed for the partial load range, by far the most common operating mode.

At higher loads and engine speeds, the two-step Audi valvelift system (AVS)closes the inlet valves later – the opening duration extends to 200 crank angle degrees. At the same time, the valve lift increases from 6.0 (0.2 in) to 10 millimeters (0.4 in). The cylinder filling increases considerably – the engine turns at a powerfully high speed and delivers smooth performance.

Separate circuits: The thermal management system
Another factor in the efficiency of the 2.9 TFSI is the thermal management system. The crankcase and the cylinder head have separate cooling circuits. After a cold start, the switchable water pump regulates the flow of coolant through the engine so that the oil heats up quickly. The exhaust manifolds are integrated into the cylinder heads, and are surrounded by the coolant, which helps to accelerate the heating process. When the engine is warm, this technology lowers the exhaust gas temperature – which significantly reduces consumption, especially during sporty driving. The impressive efficiency of the V6 twin turbo is also a result of the low friction. The fully-variable oil pump, for example, only ever generates as much pressure as necessary.

With the chain drive, a new concept reduces the required drive power: The crankshaft drives the balancer shaft, which sits deep in the V of the cylinder banks, via gearwheels. From here, chains run to the four camshaft sprockets. They are tri-oval in shape, that is, slightly triangular, in order to balance out the peak forces. The balancer shaft rotates on particularly low-friction roller bearings.

Striking: The sound of the V6 twin turbo

As soon as the engine starts, it delivers a powerful sound. At higher loads, the flaps open in the exhaust system, and the sound is even throatier. With the Audi drive select dynamic handling system, which comes as standard, the driver can also control the flaps – both for the standard RS exhaust system and for the optional RS sports exhaust system with black tail trims. The intake system of the V6 twin turbo has been intricately optimized, with pipes made from polished stainless steel allowing the air to flow in virtually unobstructed.

The specified equipment, data and prices relate to the model range on offer in Germany. Subject to changes and errors. Figures on the fuel consumption and the CO2-emissions (found from page 2 onwards) vary in case of given ranges depending on the used combination of wheels/tires.