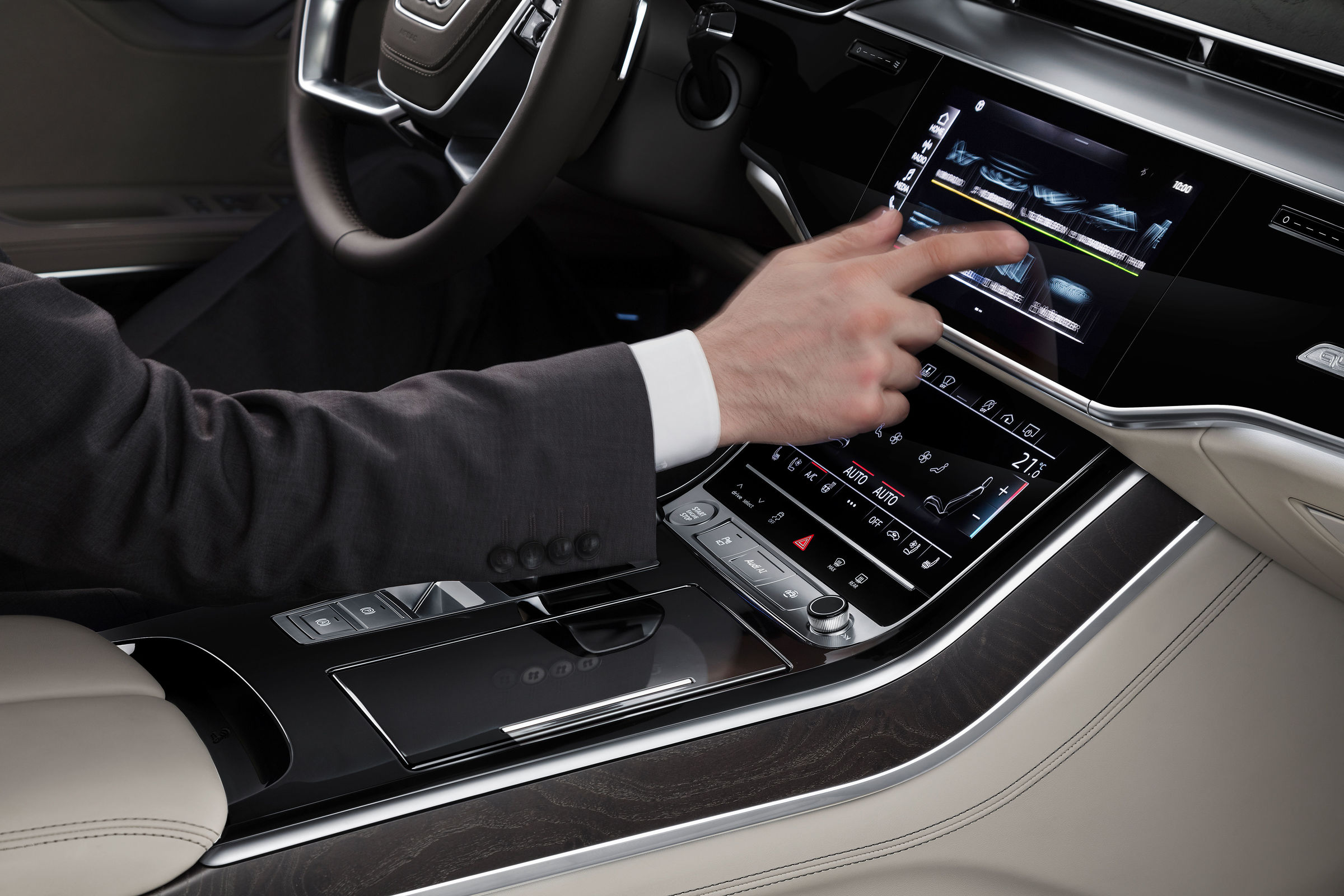 As the flagship of the brand, the A8 always presents top-of-the-line technologies – also when it comes to operation. In the second generation of the sedan Audi presented the first MMI system in 2002, the third generation following in 2010 with MMI touch. The next level of technology has now entered production – MMI touch response.

Virtual click: MMI touch response
At the center of the instrument panel is a 10.1-inch touchscreen display which, when off, blends almost invisibly into the high-gloss black surround thanks to its black-panel look.

On the display the driver controls the infotainment system. With a resolution of 1,540 x 720 pixels, the now gently curved TFT screen provides very sharp images and high contrast, even when viewed from an angle. A second touchscreen display with a 8.6-inch diagonal and a resolution of 1280 x 660 pixels on the center tunnel console allows control of the air conditioning and the comfort features. When starting a function on either of the two touchscreen displays, the driver senses a mechanical pulse as confirmation. The pulse is created by means of an electromagnet moving the spring-mounted display minimally to the side by roughly the width of a human hair. At the same time a small loudspeaker emits a click sound. Audi is opening up a new chapter in user experience here.

MMI touch response technology makes operation easier and more reliable, while at the same time conveying the claim to quality of Audi into the digital world. The surface of the display contains an anti-fingerprint coating and an anti-glare layer that refracts the reflected light to make reflections fuzzy and therefore not annoying. The outermost layer is tempered, similar to the glass used on high-quality smartphones.

Clever detailed solutions make handling the new technology even more attractive. When your finger touches an icon, the software gives direct feedback in the form of animated graphics or a color change. Pressing with your finger with such force as to start the function briefly lights up the icon or list entry. As on a smartphone, many icons come with long-touch or long-push functions. For example, to insert a new tile in the main menu, press it for eight tenths of a second – a brief vibration will then occur and movement becomes possible. Swiping, scrolling and multi-finger gestures are also supported. Text input on the lower display accommodates successively drawn letters, in addition to entire words – in each case accompanied by acoustic feedback. This allows the driver to always keep their eyes on the road.

New also are the graphics of the displays and of the Audi virtual cockpit with an incisive, cool look. All pictograms are accurately proportioned and in part exhibit subdued animated graphics – the radio wave in the main menu slightly undulates, for example, to show start readiness. The 12.3-inch, digital instrument cluster with a full HD resolution of 1,920 x 720 pixels offers the choice between two user interfaces: the classical view and infotainment mode. A head-up-display is also optionally available that projects important information as quickly accessible icons and figures on the windshield, in other words in the driver’s direct field of vision.

Other control levels: Free text search, natural voice control, Rear Seat Remote
To the intuitive menu structure Audi adds the MMI search, based on free text input. When looking for a Chinese restaurant, for instance, a hit list appears as soon as the user enters just a few letters. Another improvement is that the content of Audi connect is located no longer in a separate area, but directly in the respective function menus.

The new, natural language voice control makes the A8 an intelligent conversation partner. It understands many turns of phrase from everyday usage and can conduct a dialog with the driver. The voice control system responds to commands and questions in two ways: from the information stored on-board about preferred destinations and media or from the cloud. The online information is usually more comprehensive, while the on-board information is accessible extremely fast and reliably – even in places lacking a cell phone signal.

Besides the MMI touch response displays and hybrid voice control, the new A8 has a third control level, the newly designed multifunction steering wheel. With its buttons and rollers the driver can access all trip and vehicle information as well as primary infotainment functions.

Audi has created the compact Rear Seat Remote especially for the rear compartment. Like a smartphone, this device allows passengers to control an array of climate control, seat, lighting, adjustment and media functions via its touchscreen – from the HD matrix reading lights to seat and foot massage, the rear window blinds and music.