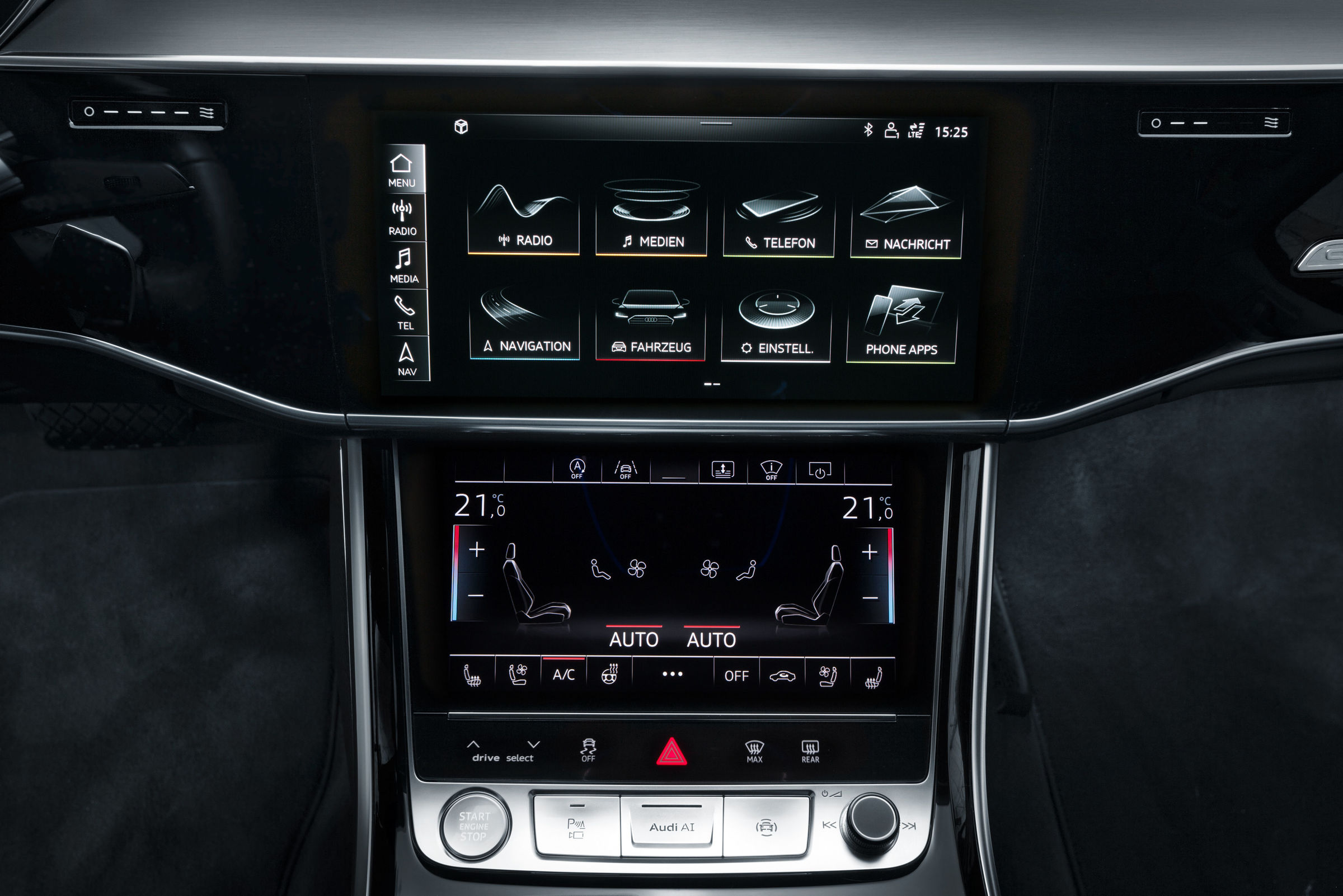 Infotainment is another area where the new A8 sets standards. The standard-equipped MMI Radio plus and the optional MMI Navigation plus use the modular infotainment platform of the latest generation, the MIB 2+. The top system integrates the Audi connect data transfer module. Besides a Wi-Fi hotspot that also supports the new 5 GHz bandwidth, the system brings the fast standard LTE Advanced into the car – another world’s first from Audi. It enables transmission rates of up to 300 MBit/s for downloads and up to 50 MBit/s for uploads, about three times that which is currently possible.

The new A8 becomes part of the cloud with the Audi connect navigation & infotainment services – this is illustrated especially vividly by the Car-to-X services for traffic sign and hazard information. Next year, the On-Street Parking service will be added. Data obtained through the vehicle swarm facilitates the search for a parking space. The driver is shown information on the possibility of finding a parking space in a particular street. The information basis for the Car-to-X services is maps supplied by HERE, a data platform that Audi is continuously updating and expanding in partnership with the BMW Group and Daimler AG. It can record and analyze traffic developments in real time. Audi connect offers many other services as well, such as access to Twitter and e-mails, navigation with Google Earth and various emergency call and service functions. In numerous markets, the data transfer for the Audi connect services is handled by the Audi connect SIM, which is built into the car.

Many Audi connect functions are brought together in the new myAudi app. It networks the customer’s smartphone with the new A8 and transmits points of interest to the navigation system, streams music and transfers the smartphone’s calendar to the MMI. The customer can also use the app to lock and unlock the doors, operate the optional auxiliary heating and access the status report.

What’s more, the new myAudi navigation feature enables the driver to seamlessly plan a route across multiple devices; something which is especially helpful in unfamiliar cities. To give an example: the app guides the customer from a restaurant to their car, which is parked a few streets away, then switches from the smartphone to the on-board monitor. When the customer gets out of their A8 at the end of their journey, it accompanies them again on their smartphone to their next destination, be it on foot or using public transport.

The navigation likewise offers an array of new features – both optical and functional. The map view now includes detailed 3D models of many major cities in Europe. In route planning the self-teaching navigation system makes suggestions to the driver based on previously driven routes, taking into account experiences with time and traffic congestion. The route is calculated online on the servers of the map and navigation provider HERE, whereby real-time data concerning the overall traffic situation is also taken into account. Should the data connection be lost during driving, the navigation system changes to on-board mode, which continues running in the background. Via the expanded point-of-interest display the driver can access from the navigation system places like fueling stations and parking garages, accompanied by additional information such as fuel prices, availability of parking spaces and opening hours. Each year there are free map updates, optionally supplied over-the-air to the car at LTE Advance speed.

The Audi connect key completes the Audi connect range of services. With this key the driver can open and lock the A8 as well as start the engine by Android smartphone – a highly convenient solution. Interaction between the car and the smartphone is by near field communication (NFC). For this purpose, the digital Audi connect key is stowed in the smartphone in a secure memory element protected against tampering and unauthorized use. The user of the new A8 can issue the access data to four additional persons, for instance colleagues or family members. The new A8 already recognizes them when the car door is opened, and adjusts all settings to their respective profiles. In addition, the smartphone can simultaneously reserve the keys for several vehicles. For situations in which the driver has to temporarily hand over the vehicle key to someone else, the Audi connect key card in credit card size is located in the vehicle. It can be activated by the driver and, for example, handed over for the purpose of valet parking.

Maximum convenience when making calls is provided by the Audi phone box, available in different versions. The full version wirelessly links the smartphone to the vehicle’s antenna, while inductively charging the phone at the same time. Voice over LTE accelerates the connection setup and allows simultaneous use of high-speed data transfer and high-definition online voice telephony (HD Voice). Here the voice of the communication partner sounds like it does in face-to-face conversation.

The new A8 allows two mobile phones to be connected and used alternately. For the rear, a separate Audi phone box is available for the four and five-seater versions alike. They turn the Rear Seat Remote into a smartphone. The rear passenger can use it to discretely make calls; display of the contact is suppressed on the large MMI touch response display.

The two Audi tablets of the Rear Seat Entertainment are equally exclusive and sturdy. Their users can enter navigation destinations, select media or surf over a Wi-Fi hotspot. After a journey, they can continue to be used away from the car on any Wi-Fi network.

Audi has three sound system offerings: the Audi sound system, the Bang & Olufsen Sound System with 3D sound in front and the Bang & Olufsen Advanced Sound System with 3D sound in front and, for the first time, in the rear as well. Of the 23 loudspeakers, two each in the A-pillars and in the roof line take care of the high-level spatial dimension. The interior becomes a world of acoustic experience where the music unfolds exactly how it was recorded in the concert hall. To do this, the system draws on an algorithm that Audi developed jointly with the Fraunhofer Institute. Drives for CDs and DVDs as well as a threefold tuner for the DAB and DAB+ digital radio standards complete the infotainment program. With its CI+ module, the digital TV tuner can receive encrypted stations through its smartcard.