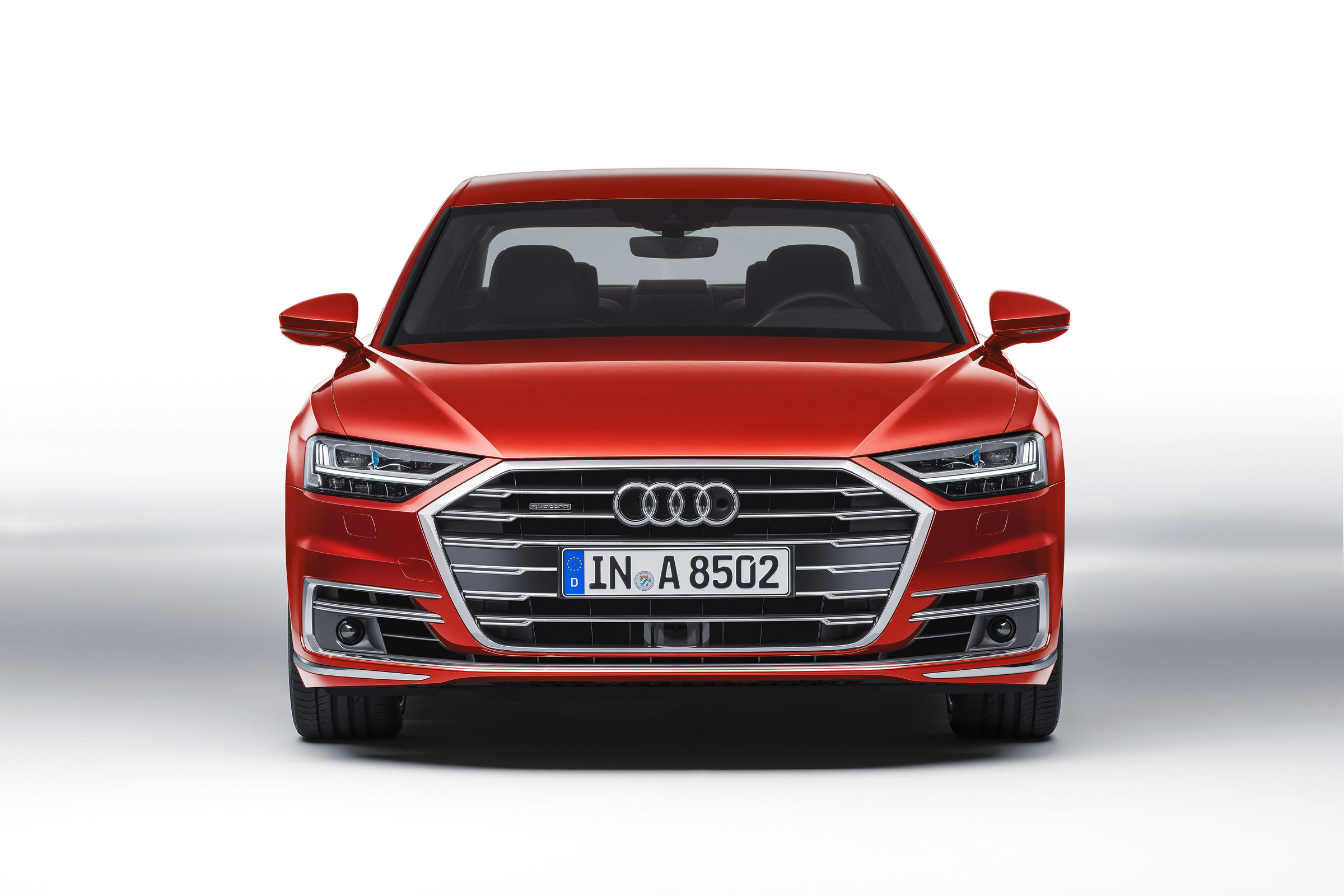 The Audi A8 is stylistically defining and signals the dawning of a new design era for the entire brand. It stands for sporty elegance, progressive status and sophistication, perfectly expressing the basic values of Audi – lightweight construction, sportiness and quattro permanent all-wheel drive.

The hexagonal Singleframe grille dominates the sedan’s upright front end. Set low with a broad width, it determines all adjacent lines and surfaces, as well as the contours on the engine hood and the headlight graphics. With the optional HD Matrix LED headlights, the daytime running lights are a visual extension of the grille’s top slat, forming a horizontal line of separation in the lights. Substantial chrome frames surround the air inlets, with a flat center inlet connecting them.

The side view with the coupe-like silhouette and the flat roof dome that drops again quickly underscores the sporty character of the new A8. The proportions equally accentuate the front and rear wheels – elegant muscular shapes above the wheels are pointers to the brand’s quattro DNA. The low shoulder line already begins at the corners of the headlights and continuously runs from the wheel arches across the door handles to the tail lights. Above it runs a second contour, beginning as the engine hood edge and also extending across the entire side. The sill edge rises to the rear in typical Audi style to lend the new A8 dynamics worthy of a sporty luxury sedan.

The deeply sculpted rear end is inclined slightly in the direction of travel, appearing to push the new A8 along even when stationary. Across its entire width extends a light band radiating high quality through an embedded chrome strip and creating a link between the two rear lights. Another chrome strip in the lower part of the bumper integrates the trapezoidal trims of the exhaust system. All chrome elements on the new Audi A8 are part of the vehicle’s sculpture.

There is a choice of 12 colors for the A8, including the new Audi colors Terra Gray, Vesuvius Gray and Seville Red. Via the Audi exclusive program, customers can also have the luxury sedan supplied in a color of their personal choice. The optional chrome exterior package makes an even more forceful statement.

Dynamic functions: the headlights and tail lights
Audi is the leading brand in light design and technology. In the new A8, lighting interacts intelligently with the surroundings. For example, Audi laser light is used here for the first time with HD Matrix LED high beams. The laser spot located in the upper part of the headlight is identifiable by the X-shaped surround, with the scene set by a blue ambient light. The laser spot is activated from a speed of 70 km/h (43.5 mph) and doubles the range of the high beam. The horizontal daytime running lights with their vertical segments form a characteristic light signature.

Each HD Matrix LED high beam unit contains 32 small, separately adjustable light-emitting diodes. They are located in a shared housing next to the laser spot and emit the light in two rows. Thanks to this new arrangement and the equally variably controllable low beam in the bottom part of the headlight, the A8 illuminates the road with the utmost dynamism and precision. The light cone blanks out other road users, so as not to dazzle them. The LEDs also act as cornering lights, created through a displacement of the light concentration following the contour of the bend. This occurs already shortly before the wheel is turned, based on the predictive route data from MMI Navigation plus. The junction light also goes on predictively just before a junction is reached. In addition, the segmented turning light goes on dynamically in three stages up to a maximum angle of 90°.

With all its functions complete with dynamic turn signals, each HD Matrix LED headlight incorporates 138 LEDs and one high-performance laser diode. With its refined play of metallic slats and chrome lines, the housing also underscores the status of the headlights as technological works of art. The innovative automatic lighting prevents incorrect operation and is controlled from a new light switch module with proximity sensors and touchscreen surface.

Together with the high-end headlights, Audi provides OLED rear lights, which emit an extremely homogeneous light and stand for the lightness and precision of Audi. Each unit contains four upright OLEDs of less than a millimeter in thickness. They are subdivided into four separately controllable segments – two for the angular tail light and two for the brake light. Below the OLEDs there is an LED light strip that adapts to ambient brightness when the brakes are applied. The same applies to the dynamic turn signals along the bottom of the tail lights. 135 light-emitting diodes operate in each rear light.

The dynamic light functions underscore the exceptional appearance of the new Audi A8 – unlocking with the remote key triggers a spectacular light show. First a point of light moves in the headlights from the outside inwards, then the blue LED on the laser spot lights up, and finally the side lights come on from the inside outwards. Two loops with the same dynamic aesthetics run in parallel in the OLED rear lights: The light runs in a circle, initially dimmed and then at full brightness. The light show continues inside when the door is opened. At the same time, a brief jingle plays through the sound system – light and sound harmonize perfectly with one another, and the customer can adjust the volume. When the driver leaves the sedan, the light show continues in reverse order in the headlights and rear lights.