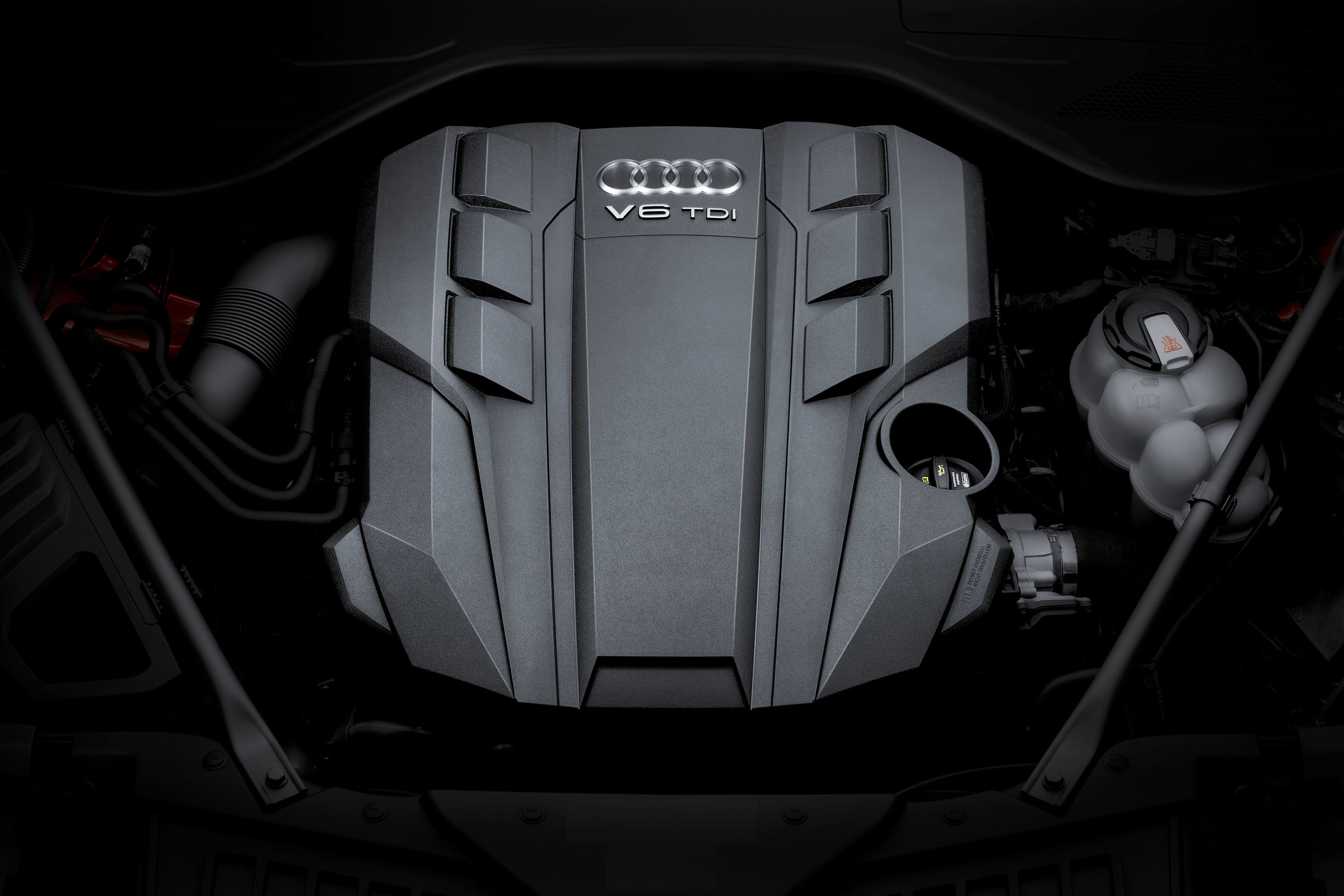 The new mild-hybrid technology (MHEV = mild hybrid electric vehicle) is standard with all A8 engines. It reduces fuel consumption by up to 0.7 liters (0.2 gal) per 100 kilometers (62.1 mi) in actual driving. The MHEV technology from Audi is based on a newly developed 48 volt main vehicle electrical system. It comprises a compact lithium-ion battery with an electrical capacity of 10 Ah, located in the luggage compartment underneath the loading floor of the A8, as well as a belt alternator starter (BSG) connected to the crankshaft.

The effects are impressive: in the speed range of 55 to 160 km/h (34.2 - 99.4 mph) the new A8 can coast with the engine off, if the driver releases the accelerator. The vehicle can then travel with zero emissions for up to 40 seconds. As soon as the driver steps on the gas again, the BAS prompts a swift, very smooth restart. The new 48-volt system allows a high recuperation power of up to 12 kW plus start-stop operation from 22 km/h (13.7 mph).

The optional efficiency assist can also contribute to an economical driving style. The system instructs the driver when to release the accelerator, before entering a curve or behind a slow vehicle, for example. If desired, the system automatically regulates acceleration and deceleration. It utilizes predictive route data from the navigation system and information from Audi connect. The on-board sensors supply the system with findings on traffic signs and other vehicles.

Powerful and spontaneous: the V6 engines
Both six-cylinder versions draw their power from a displacement of three liters. The 3.0 TDI (A8 50 TDI) has undergone intensive development in many details compared with its predecessor, in particular regarding its especially elaborate thermal management. At a torque of 600 Nm (442.5 lb-ft) it develops high tractive power. In addition, the V6 TDI is fitted with active engine mounts that inhibit the transmission of vibrations to the vehicle body. They generate out-of-phase counter-pulses – their effect is particularly marked when idling.

The 3.0 TFSI (A8 55 TFSI) also develops its 500 Nm (368.8 lb-ft) of torque extremely early. Its exhaust end lies inside the 90° vee, so that the short gas paths and the twin scroll charger greatly promote responsiveness. The so-called B-cycle combustion process, specially conceived for the partial-load range, makes the V6 spark ignition engine especially efficient. To support it, the Audi valvelift system (AVS) adjusts the intake valve opening times and stroke in two stages based on load and engine speed.

Stable and efficient: the power transmission
All engines transmit their power to the newly developed eight-speed tiptronic. It changes gear swiftly and smoothly, with impressive efficiency. An rpm-adaptive torsion damper with a centrifugal force pendulum largely compensates for undesirable vibrations in the engine. This permits efficient driving from an engine speed range as low as 1,000 revolutions per minute. The driver can let the automatic transmission do the work automatically in the E, D and S modes, or can take charge of controlling it in M mode. Selector lever commands are all transmitted electrically.

The tiptronic has undergone a few modifications for its interplay with MHEV technology. When the new A8 is coasting with the engine at idle speed or off, a clutch disengages in the central transmission and interrupts the power transmission. During coasting with the engine off, a novel electrical oil pump allows the driver to engage the gear required following the coasting phase. The shift sequence and the connection logic have been optimized for fast tractive force buildup. So-called plate separation further lowers the drag torque in the transmission; a plastic oil pan reduces the weight of the latter. The overhauled transmission control module detects stop & go traffic and in such situations avoids unnecessary shift operations or starting off in second gear.

quattro permanent all-wheel drive is standard in the new Audi flagship model. In normal driving conditions, its self-locking center differential distributes torque between the front and rear axle in a 40:60 ratio. Should wheel slippage can occur, most of the drive torque goes to the axle with the better traction. Up to 70 percent can flow to the front wheels and up to 85 percent to the rear. For a sporty driving style, the wheel-selective torque control, an intelligent software function, further benefits handling. It minimally brakes the two wheels on the inside of a bend before they can begin to spin.

For all MHEV engines, the sport differential is optionally available. When cornering dynamically, it redistributes the torque between the rear wheels as required – benefitting traction, stability and dynamics. The sport differential weighs somewhat less than its predecessor, and its control actions are even faster and more precise. In the center display the driver can display the drive torque in graphic form. Management occurs via the electronic chassis platform. It networks the sport differential with the control systems
for the dynamic all-wheel steering and the Audi AI active suspension, and precisely coordinates the work by all components.