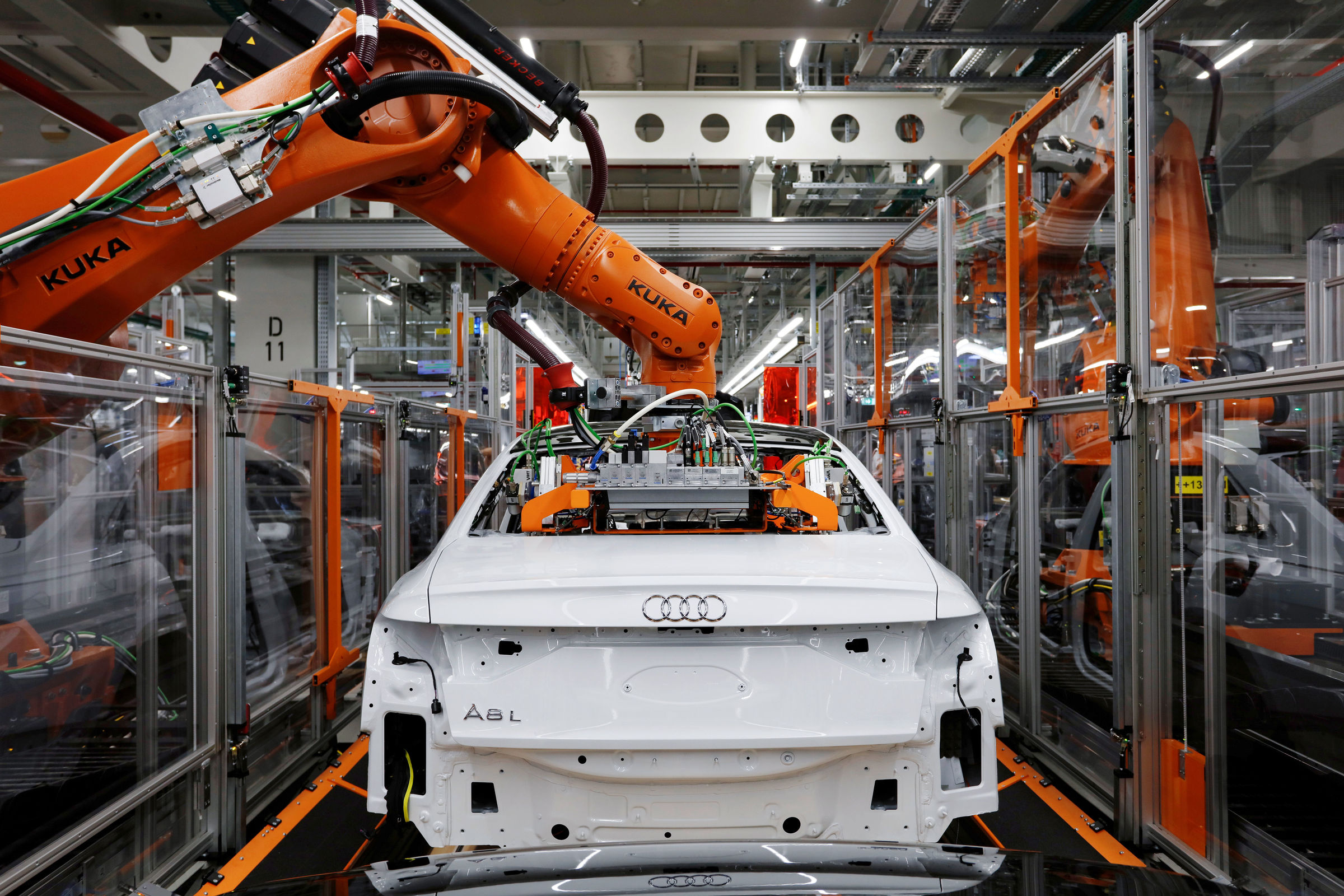 This growth benefits the passengers. In length, the interior has gained an extra 32 millimeters (1.3 in) compared with the predecessor model. The A8 L also has more headroom, shoulder room and leg room. The luggage compartment has a capacity of 505 liters (17.8 cu ft) in both the A8 and the A8 L.

Light and rigid: the Audi Space Frame in a multi-material design
In the new A8 aluminum, steel, magnesium and carbon fiber-reinforced polymer (CFRP) form a strong, rigid and impact-proof combination – the body structure combines more types of materials than ever before in an Audi production model.

In terms of its overall dimensions, an ultra-high-strength, torsionally rigid rear panel made of CFRP is the largest component in the occupant cell of the new Audi A8, and it contributes 33 percent to the torsional rigidity of the total vehicle. To optimally absorb longitudinal and transverse loads as well as shearing forces, between six and 19 fiber layers are placed one on top of the other, ensuring a load-optimized layout. These individual fiber layers consist of tapes 50 millimeters (2.0 in) wide and can be placed individually in a finished layered panel, with any desired fiber angle and minimal trimming of the fibers. Using a newly developed process, this is wetted with epoxy resin and cured within minutes.

A high-strength combination of hot-formed steel components make up the occupant cell, which comprises the lower section of the front bulkhead, the side sills, the B-pillars and the front section of the roof line. Some of these sheet metal blanks are manufactured in varying thicknesses by means of so-called tailoring technologies – they are tailor-made in other words – and others also undergo partial heat treatment. That reduces weight and increases the strength, especially in areas of the vehicle that are particularly critical for safety.

Aluminum components in the form of cast nodes, extruded profiles and sheets – elements characteristic of the ASF design – make up the biggest share of the new Audi A8 body, at 58 percent. New heat-treated cast alloys, for example, attain a tensile strength of over 230 MPa (megapascals). The corresponding yield strength in the tensile test is over 180 MPa, and for the profile alloys it is higher than 280 and 320 MPa – significantly higher values than seen previously.

The largest cast parts form the connections between the side sills and rear longitudinal members – their highly complex geometry, which would not have been manufacturable with steel, made the increased length possible to begin with. The strut brace in the engine compartment is magnesium, saving weight by 28 percent. Aluminum bolts provide the connections to the strut domes.

Audi uses 14 different joining techniques to assemble the multi-material body, including hemming for the door sills. This technology is used to join the aluminum side wall frame to the hot-formed steel sheets at the B-pillar, roof line and sills. It is the very basis for their use. It also results in very narrow flanges and in correspondingly large, convenient entries. The CFRP rear wall module – already fitted with all installed parts like speakers, rear blinds or seat belts – enters the car during final assembly. A robot guides the module through the rear window cutout into the body. Rivets as well as an adhesive preventing contact corrosion join the module to the metallic ASF.

The multi-material ASF of the new A8 is not only extremely lightweight, it is also impressive with regard to all other criteria. The flagship’s torsional rigidity – the critical parameter for precise handling, pleasing acoustics and top workmanship – surpasses its predecessor model’s rigidity value by up to 24 percent. Another contributing factor is the structural front end, which increases the transverse rigidity in the front end. The crash safety as well as occupant and pedestrian protection of the large sedan are also at the highest level. In a head-on collision, the three stress planes in the front end absorb the forces.

For further increasing the level of passive safety in the A8, safety package plus contains innovative center airbags. One is located between the front seats and one between the rear seats. They afford additional protection in a side collision and in a rollover. Crash-active head restraints in combination with the comfort seats also increase safety in a rear-end collision. Reversible seat belt tensioners in the front and rear minimize displacement of occupants to the front or sides during emergency or hazard braking.

The new A8 leads its class with intensive finesse in every area of aeroacoustics, too – especially at the mirrors and door seals – never before has an Audi been so quiet. Here the glazing also plays a crucial role. Acoustic glazing is available on request.

The windshield wipers have also been newly developed for the A8 and are intelligently controlled. The spray nozzles lie in their arms, and the water is sprayed directly in front of the blades, always at the correct wiping angle. This uniform wetting, which also takes into account the driving speed, the outside temperature and the degree of dirt, cleans the windshield fast and reliably, so that the driver always has a clear view.