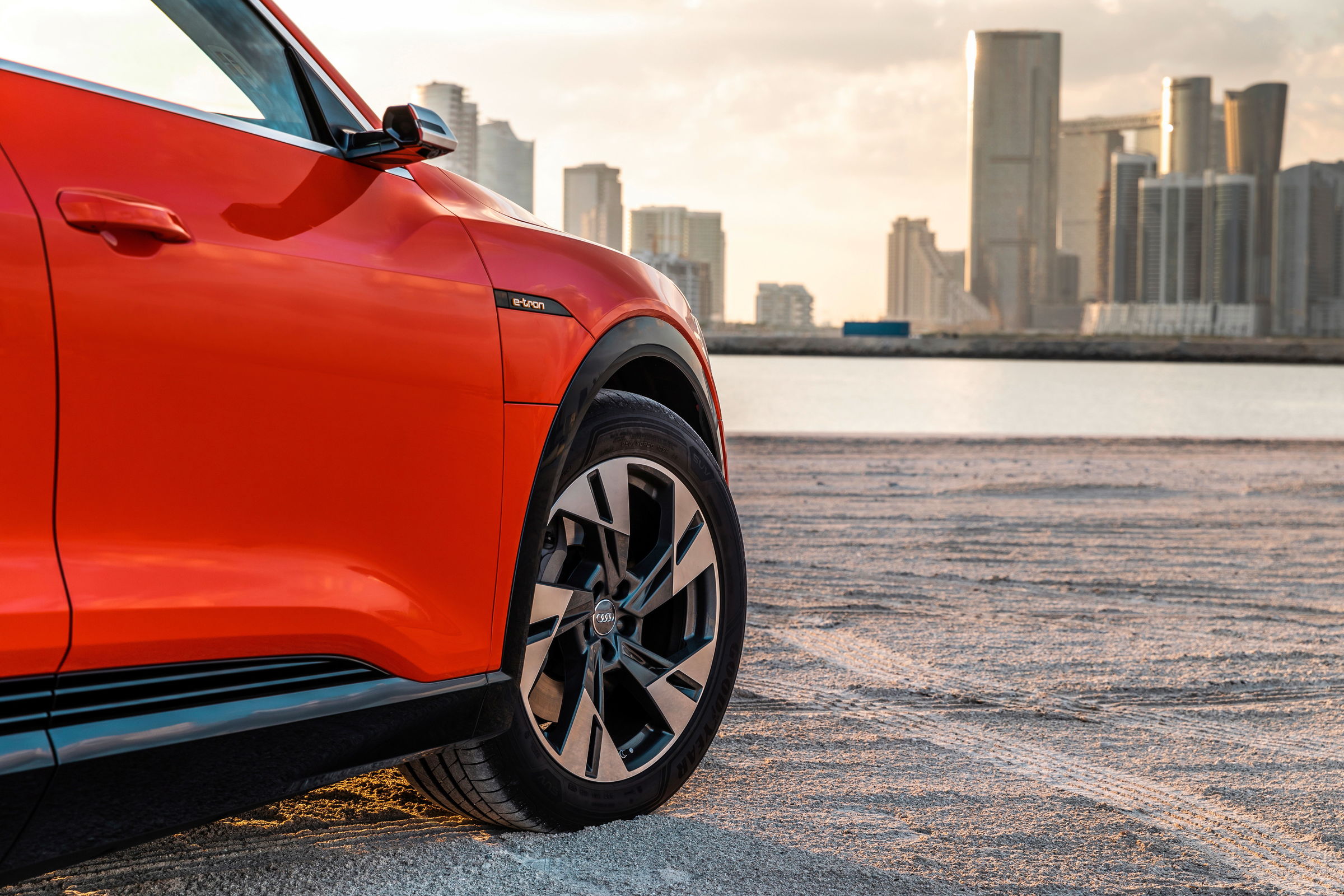 The Audi e-tron reflects the fundamental formal idiom of Audi design and translates it for the electric age. Style-defining details indicative of the new drive technology include the distinctive sill area, the specific daytime running light signature and the lack of exhaust pipes. The optional virtual exterior mirrors – a worldwide first in a series production model – are both a visual and aerodynamic highlight.

Typically for one of the brand’s SUV models, the Audi e-tron bears the octagonal-design Singleframe grille with vertical struts. Its corpus is largely enclosed and presented in platinum gray – identifying it as a purely electric model. At the lower edge of the Matrix LED headlights, four horizontal struts create the e-tron‑specific signature in the daytime running lights. For the first time this is integrated directly into the headlights – another exclusive design feature for the all-electric drive system. Light is used as a core design feature. Each Matrix LED headlight includes 55 light-emitting diodes, ten of which are for the high beam. They illuminate the road dynamically and precisely while excluding other road users from the cone of light. The front and rear indicators are dynamic.

Particularly eye-catching are the virtual exterior mirrors available as an option for the Audi e-tron. Incorporated into the hexagonal end of their flat supports is a small camera with a resolution of 1280 x 1080 pixels. Image brightness is adjusted for the ambient conditions, such as when driving through a tunnel. Each support also incorporates an LED indicator and optionally a TopView camera. Inside the Audi e-tron, the images from the virtual exterior mirrors appear on OLED displays in the transition between the instrument panel and door.

The wrap-around shoulder line is the defining design element in the side view. It extends from the headlights, along the flanks, to the rear lights, giving the Audi e-tron a low visual center of gravity. The roof stretches low across the muscular body, which with its brawny

D-pillars and the underbody protection boasts clear SUV attributes. The quattro blisters over the wheels hint at the electric all-wheel drive. The sill area is also boldly contoured. With the black inserts on the door trim, it visualizes the location of the battery and thus the energy center of the Audi e-tron.

At the sculpted rear end, the long roof edge spoiler and the wide diffuser emphasize the horizontal and thus the sporty character of the electric-powered SUV. A light strip – a typical feature of Audi’s top models – connects the LED rear lights. With their horizontal emphasis and segmented appearance, the tail lights echo the graphics of the daytime running lights. Horizontal lamellas to both sides of the diffuser spotlight the lack of tailpipes and reiterate that the Audi e-tron is powered solely by electricity.

At market launch the electric SUV will be available in a choice of ten colors, including the exclusive shade Antigua blue. The e-tron logo on the electric charging flap and optionally the brake calipers stand out in the high-voltage signal color orange. The wheel arch trims and sills are finished in anthracite as standard to underscore the off-road look. The underbody protection, diffuser and the inserts in the sill area are painted black. In the optional advanced line with 20-inch tires, the attachments are either finished in a contrasting gray or the body color. The underbody projection and diffuser sport a matt silver tone. The black styling package is also available as an option.

With an electric car, weight influences energy consumption far less than in the case of a car with a combustion engine. In town it is generally efficient because it can recover a large part of the energy, which it uses to accelerate, when rolling up to the next red light. The situation is totally different on long journeys, however, where the Audi e-tron is perfectly at home: From speeds of around 70 km/h (43.5 mph), rolling resistance and inertia here take second place to aerodynamic drag irrespective of the type of car. The energy required to overcome that drag is lost. This is why the engineers were so focused on the aerodynamics during the development of the Audi e-tron. Some solutions are visible at a glance, such as the virtual exterior mirrors and the aero bezels on the rear window. Others go about their business out of sight. Thanks to these solutions, the drag coefficient for the Audi e-tron is almost 0.07 less than for a comparable, conventionally powered vehicle. With a typical usage profile, this increases the range by around 35 kilometers (21.7 mi) per battery charge in the WLTP cycle. To achieve the same result simply by cutting weight, the engineers would have had to shed a half a metric ton (1,102.3 lb).

With conventional exterior mirrors, the Audi e­‑tron achieves a drag coefficient of 0.28. With the optional virtual exterior mirrors this value is 0.27 – a top mark in the SUV segment. Compared to the standard mirrors, the camera mirrors reduce the vehicle width by 15 centimeters (5.9 in) and, thanks to their new shape, not only reduce drag, but also noticeably cut the already low wind noise.

Another key aerodynamic factor is the fully lined underbody of the Audi e‑­tron. Its primary component is the aluminum plate beneath the high-voltage battery. Its bolting points come with bowl-shaped indentations, similar to the dimples on a golf ball. They make the air flow much better than a totally flat surface. The electric motors on the axles and the wheel suspension are covered with paneling made from pressed fiber-fleece material, which at the same time absorbs noise. Ahead of the front wheels, wheel spoilers mounted on the underbody use air baffles to reduce irritating swirl in the wheel arches. These baffles specifically channel the airflow past the wheels. The transverse links on the rear axle of the Audi e-tron are located under separate paneling. A variable diffuser below the rear skirt ensures that the accelerated air returns to ambient speed and creates as little swirl as possible.

The standard adaptive air suspension also contributes to the low drag coefficient. From speeds of 120 km/h (74.6 mph), it lowers the body of the Audi e-tron by as much as 26 millimeters (1.0 in) from the normal height of 172 millimeters (6.8 in). As a result, the rectangle that the tires represent for the airflow and opposes the slipstream partially disappears into the wheel arch. This measure also improves handling.

Helping to lower drag at the front of the car is the controllable cool-air intake – a frame behind the Singleframe with two electrically operated louvers. When shut, the air in this area flows with virtually no swirl. As soon as the drivetrain components need cooling or the air conditioning condenser requires ventilation, the top louver opens first and then both louvers. When the hydraulic wheel brakes are subject to high loads, the controllable cool-air intake opens and releases two ducts which channel the cooling air into the front wheel arches to the brakes.

The side air inlets at the front of the Audi e-tron incorporate additional ducts, which are clearly visible from outside, to the wheel arches. They channel the airstream so that it flows past the outside of the standard aerodynamically optimized 19-inch wheels. Their design is flatter than with conventional wheels, thus reducing the aerodynamic drag. The 255/55 tires are optimized for low rolling resistance, and their flanks are aerodynamically designed – the lettering is recessed rather than raised.