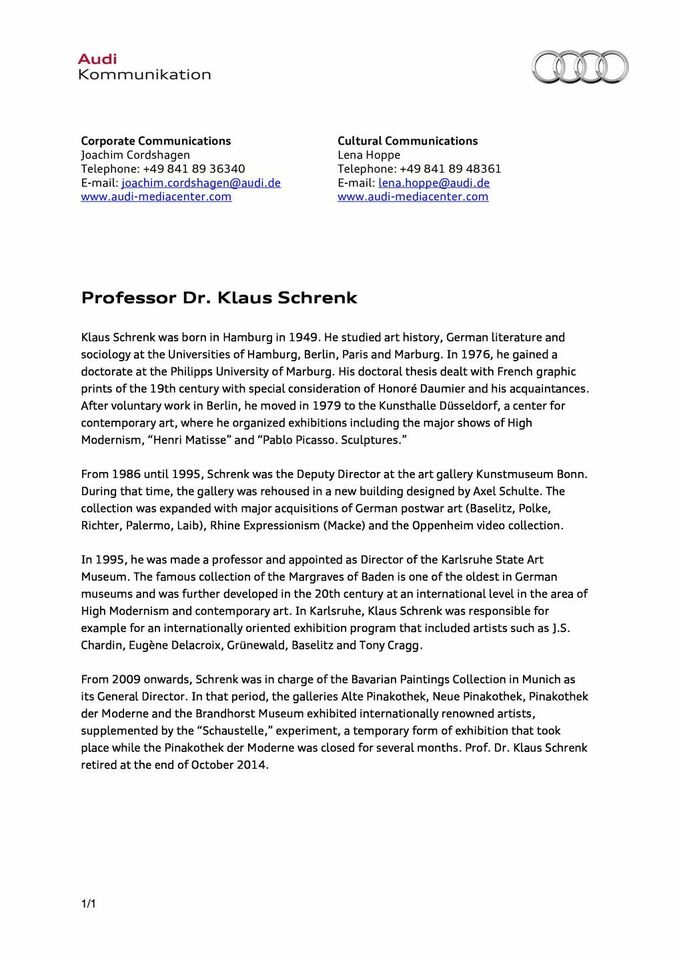 Klaus Schrenk was born in Hamburg in 1949. He studied art history, German literature and sociology at the Universities of Hamburg, Berlin, Paris and Marburg. In 1976, he gained a doctorate at the Philipps University of Marburg. His doctoral thesis dealt with French graphic prints of the 19th century with special consideration of Honoré Daumier and his acquaintances. After voluntary work in Berlin, he moved in 1979 to the Kunsthalle Düsseldorf, a center for contemporary art, where he organized exhibitions including the major shows of High Modernism, “Henri Matisse” and “Pablo Picasso. Sculptures.”

From 1986 until 1995, Schrenk was the Deputy Director at the art gallery Kunstmuseum Bonn. During that time, the gallery was rehoused in a new building designed by Axel Schulte. The collection was expanded with major acquisitions of German postwar art (Baselitz, Polke, Richter, Palermo, Laib), Rhine Expressionism (Macke) and the Oppenheim video collection.

In 1995, he was made a professor and appointed as Director of the Karlsruhe State Art Museum. The famous collection of the Margraves of Baden is one of the oldest in German museums and was further developed in the 20th century at an international level in the area of High Modernism and contemporary art. In Karlsruhe, Klaus Schrenk was responsible for example for an internationally oriented exhibition program that included artists such as J.S. Chardin, Eugène Delacroix, Grünewald, Baselitz and Tony Cragg.

From 2009 onwards, Schrenk was in charge of the Bavarian Paintings Collection in Munich as its General Director. In that period, the galleries Alte Pinakothek, Neue Pinakothek, Pinakothek der Moderne and the Brandhorst Museum exhibited internationally renowned artists, supplemented by the “Schaustelle,” experiment, a temporary form of exhibition that took place while the Pinakothek der Moderne was closed for several months. Prof. Dr. Klaus Schrenk retired at the end of October 2014.