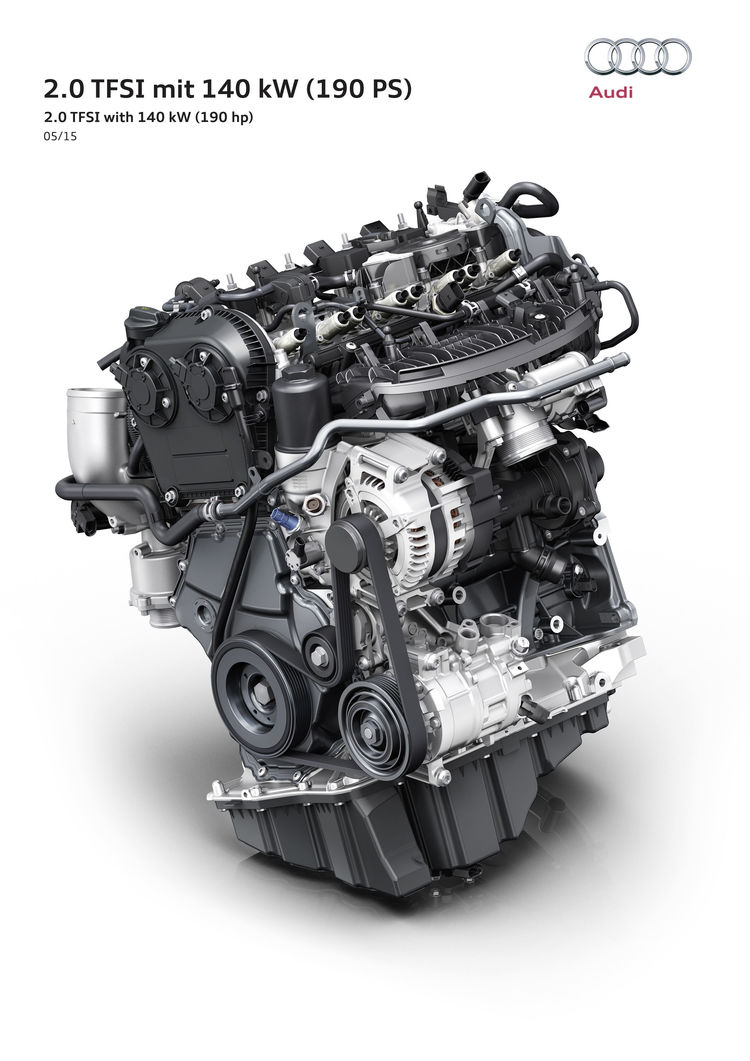 Audi presents the most efficient two-liter gasoline engine in its class. The new 2.0 TFSI with 140 kW (190 hp) demonstrates the engine expertise of the brand – with a ground-breaking new combustion method. Audi will be using the engine for the first time in the next generation of the A4.

Over ten years ago, Audi was the first manufacturer worldwide to bring the TFSI engine with turbocharging and direct injection into series production. This made the brand with the four rings the trendsetter in downsizing and downspeeding. “We’re now taking a crucial step further with rightsizing,” said Prof. Dr. Ulrich Hackenberg, Member of the Board of Management for Technical Development at AUDI AG.  The reduction in displacement and engine speed can be optimally effective only if reasonably related to the vehicle class and the customers’ everyday use, explains the Technical Director. “Rightsizing thus involves the optimal interplay of vehicle class, displacement, output, torque and efficiency characteristics under everyday conditions. Our new 2.0 TFSI is a prime example of Vorsprung durch Technik.”

The four-cylinder engine draws 140 kW (190 hp) of power and 320 Nm (236.0 lb-ft) of torque from a displacement of 1,984 cc.  Because the high torque is applied in a wide speed range of 1,450 to 4,400 rpm, every customer will benefit from the constantly accessible, high pulling power of the engine. The engine also boasts of groundbreaking low fuel consumption levels. With consumption levels less than 5.0 l/100 km (47.0 US mpg) in the NEDC, the four-cylinder engine clearly undercuts its predecessor and comparable competitors.

Technology in detail:
The breakthrough of the 2.0 TFSI lies in a new combustion method. At its core its principle is comparable to the Miller cycle. Audi engineers have further developed that method in crucial ways, however. The increase in efficiency is based on the following factors:

Dr. Stefan Knirsch, Head of Engine Development at Audi, sums up the benefits of the new engine: “Thanks to this rightsizing approach, the new engine enjoys the consumption benefits of a downsizing engine in partial load operation, while at higher loads it has the advantages of a large-displacement engine. The result is optimal efficiency and performance characteristics across the entire engine speed range.”

Beyond the new combustion method, the new engine, with a weight of only about 140 kg (308.6 lb), avails itself of other efficiency technologies. For example, the coolant flow is controlled so as to greatly shorten the engine warm-up time. Contributing to this benefit is also the exhaust manifold, integrated in the cylinder head. The consistent reduction of friction as well as the use of low-friction engine oil (0W-20) also increases efficiency.

The comprehensive package of high-tech solutions makes the new 2.0 TFSI a real high-efficiency engine that sets a new benchmark in its segment. Audi will be introducing the new generation of engines first in the new Audi A4, and then in other model series.

Audi A4:
This vehicle is not yet on sale. It does not yet have type approval and is therefore not subject to Directive 1999/94/EC.