Victorious Le Mans Audis back in the United States 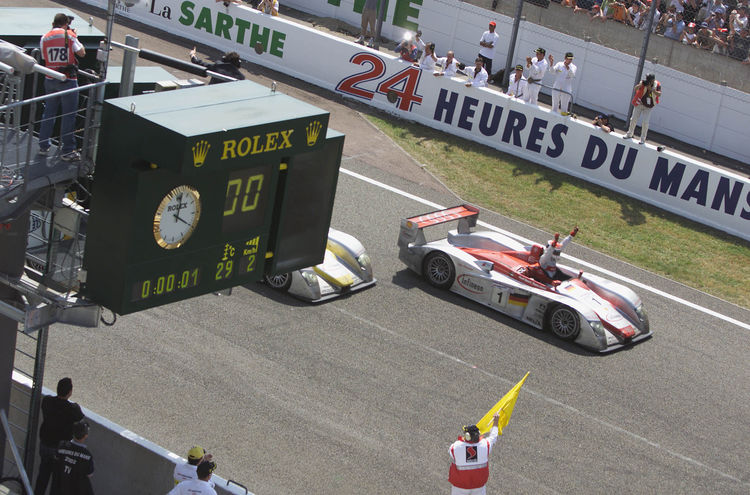 Following the threefold victory in the Le Mans 24 Hours, the successful Audi team has no time to take a breath. Immediately after the historic triumph in the world’s toughest motor race, preparations began at the Team Audi Sport North America for a “double strike” in the American Le Mans Series (ALMS): at Mid-Ohio and Road America, June 30 and July 7 respectively, two ALMS-rounds that are taking place within one week of each other.

Because the same Infineon Audi R8s that claimed the first two places at Le Mans are also being used in the United States, a race against the clock started for the Audi team. Both R8s were entirely stripped down and re-built and following a brief roll-out, flown to North America.

There, the Audi drivers are facing the task of completing a ALMS hat-trick, following the third consecutive victory at Le Mans. In 2000 and 2001, Audi won the ALMS title.

For the Mid-Ohio race, the Audi crew is especially motivated. Last year, the Infineon Audi R8 was the car to beat at the undulating track in the heart of the American federal state of Ohio. Nevertheless, Panoz was in front during the race, because one of the Audis had to come in for an unscheduled pit stop and the other works R8 was given a stop-and-go penalty. After having just missed out on victory to the American front-engined sports car in the second round of the 2002 season in Sears Point, there is just one goal for Audi in Mid-Ohio: victory.

But not only Panoz wants to prevent another victory for the Infineon Audi R8. The Audi customer team Champion Racing, currently leading the overall standings of the ALMS with Johnny Herbert, has been stocking up on the drivers’ side: Herbert’s new partner behind the wheel of the ADT Champion Audi R8 is Stefan Johansson from Sweden, who already competed for Champion Racing in the Sebring 12 Hour race where he finished second.

One week later, the Audi drivers will be discovering new territories in Road America. On the demanding track near Elkhart Lake in the American federal state of Wisconsin, an ALMS round is taking place for the first time, covering a distance of 500 miles, which makes it a real endurance race.


Quotes before the races in Mid-Ohio and Road America

Frank Biela (Infineon Audi R8 #1): “After Le Mans, Mid-Ohio is just the opposite. The track is twisty, relatively slow, but very demanding and hard for the drivers. If it is warm, it will be a tough race. Last year, the R8 was good at Mid-Ohio. This year, we have even more downforce, which should be an advantage at such a twisty track. I can’t say much about Road America: I have never been there and I don’t know the track, but it is said to be interesting, and I am happy with every new circuit.”

Emanuele Pirro (Infineon Audi R8 #1): “For me, Mid-Ohio and Road America are the nicest tracks on the ALMS calendar, together with Laguna Seca. Frank and I are relatively far behind in the points’ standings after the first two rounds. But last year, we saw, that one should never give up and that things can still change in the end. But when I am honest, I am supporting ‘Dindo’ in the fight for the title: he wanted victory at Le Mans so badly and had deserved it, too. Maybe it works out with the ALMS title.”

Rinaldo Capello (Infineon Audi R8 #2): “Obviously, I was somewhat disappointed after the race in Le Mans, but now, I am totally concentrating on the ALMS and I am looking forward to the next races: Mid-Ohio and Road America are two very interesting tracks. In Mid-Ohio, Tom and I still have unfinished business after our bad luck from last year. I only know Road America from TV, but I really like what I have seen there.”

Tom Kristensen (Infineon Audi R8 #2): “Mid-Ohio is a relatively slow, twisty track, but it has many interesting corners. I really like Mid-Ohio. Last year, I was on pole there. I am especially looking forward to Road America. I don’t know the track yet, but Jacques Villeneuve has told me that it is the best track in the United States. And I my birthday is on raceday (July 7).”

Johnny Herbert (ADT Champion Audi R8 #38): “I have to score points on a regular basis in order to defend my championship lead. The works Audis and the Panoz will not be making life easy for me in the next rounds. Without doubt, Champion Racing will be providing me with a competitive car and the ALMS title is my clear goal. Last year, I was only fifth in Mid-Ohio, this time, it has to be a podium finish.”

Stefan Johansson (ADT Champion Audi R8 #38): “It is great news for me to drive for Champion Racing together with Johnny because it is a step back for me into the Audi family. I always enjoyed working with Audi. The R8 is the best racecar I ever drove. It was very disappointing for me that I could not continue the Audi programme this year with my own team after the European Le Mans Series was cancelled and we did not get an invitation for Le Mans. So I am very pleased to be back.”

Ralf Jüttner, Technical Director Audi Sport North America: “In Mid-Ohio, we still have unfinished business. Last year, we were very strong there and we should have won the race, but we didn’t… The track at Mid-Ohio is great, a classic sports car track, that also pulls a good crowd. Road America is even more impressive – just a great track with very fast corners that require skill from the drivers. Joest Racing has fond memories of Road America: we celebrated a double victory there back in 1992. None of the current Audi drivers know Road America. But our drivers have proven more than once that they can learn new tracks quickly.”

Dr Wolfgang Ullrich, Head of Audi Sport: “From now on, Johnny Herbert will be some kind of half-adversary: he might be driving an Audi, but against our works-team. The title race in the American Le Mans Series will be really exciting, also because of his new team mate Stefan Johansson. But we shouldn’t underestimate Panoz either: after their bad luck at Le Mans, they will be totally motivated. Of course, the same applies to ‘Dindo’: because it didn’t work out for him at Le Mans again, his goal now has to be the ALMS title. That ensures plenty of excitement.”