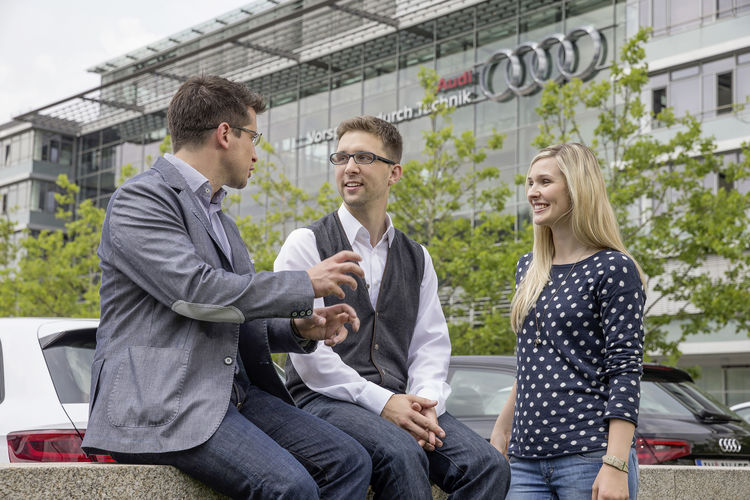 Amongst young employees, Audi is more popular than ever as an employer. The automobile manufacturer has achieved its best results in the renowned Universum study for young professionals since taking part in the ranking.
Download PDF (185 KB)
Facebook
Twitter
LinkedIn
WhatsApp

Audi has achieved its best results in the renowned Universum study for young professionals since the survey started. The company has recorded another double victory as the most popular employer for graduates of both engineering and business management. In the IT category, the brand with the Four Rings has moved up to second place. Amongst graduates of natural sciences, Audi has made a great leap forward by 14 places. Meanwhile, the Audi family has grown to a new record size in 2014: After recruiting more than 3,000 new employees this year, the Audi Group will have a worldwide workforce of approximately 80,000 people at the end of 2014.

Amongst young employees, Audi is more popular than ever as an employer. This is demonstrated by the Universum rankings of young professionals with up to eight years of working experience, which the magazine Wirtschaftswoche published today. In those rankings, Audi has achieved top places amongst German engineers, business management graduates, IT specialists and natural scientists.

“We offer young professionals very exciting tasks and a modern working environment,” stated Thomas Sigi, Audi’s Board of Management Member for Human Resources and Labor Relations Director. “Most of the approximately 3,000 planned new recruits for 2014 are already on board. In the future, many of them will support our efforts in the innovative fields of lightweight construction, connectivity and electric mobility. With them, we will shape the mobility of tomorrow,” continued Sigi. The company’s course of expansion offers many career opportunities to its worldwide employees: “Just recently, we inaugurated a modern training center in San José Chiapa – a milestone in the development of our new plant, stated Sigi. When the plant in Mexico goes into operation in 2016, Audi will have a total of 14 production sites in twelve countries.

The company’s success attracts not only engineers and graduates in business management, amongst whom Audi has taken first place in the Universum study, like last year. The brand with the Four Rings is also becoming increasingly popular amongst the highly sought-after IT experts and natural scientists. In the study, the IT professionals voted Audi into an excellent second place, behind Google and ahead of Microsoft. This makes Audi the leading automobile manufacturer in that ranking. Amongst the natural scientists, Audi has moved up 14 places and is in the top 20 for the first time.

“Young people place value not only on Audi’s innovative strengths, but also on our corporate culture,” explained Thomas Sigi. “We are an international group that acts pragmatically despite its size – often crossing over hierarchical boundaries. We transfer responsibility to our employees at an early stage,” stated Sigi. “That awakens creativity and the courage to go new ways.”

Audi’s popularity as an employer is demonstrated also by current applicant numbers. By the end of November, more job applications were sent to the two German sites in Ingolstadt and Neckarsulm than ever before. As a result of this year’s recruitment, the Audi family has grown to a record size: By the end of the year, approximately 80,000 people will work for the Audi Group worldwide.