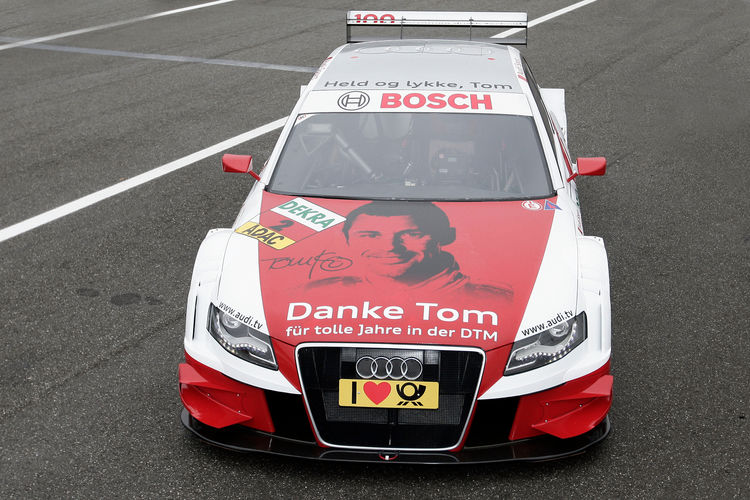 In addition to members of AUDI AG’s executive board, many guests of the brand have also announced their attendance at the title decision of the DTM finale at Hockenheim (Sunday, starting at 1:45 pm live on “Das Erste”) – and Le Mans record winner Tom Kristensen will receive a unique farewell gift at Hockenheim.

Tom Kristensen will contest his 60th and last DTM race at Hockenheim. The 42-year-old Dane’s sporting track record includes nine pole positions, four race victories, 18 podium places and 212 points. Audi honors the achievements of its “factory” driver, who was part of the DTM driver line-up for six years since the brand’s return to the series in 2004, with special graphics on his car, for all the fans to see. The red-white Audi A4 DTM will be emblazoned with an inscription in German, “Danke Tom für tolle Jahre in der DTM“ (Thank you, Tom, for fantastic years in the DTM) and “Held og lykke, Tom” in his Danish native tongue as well as a large portrait picture on the hood.

Several executive board members of AUDI AG would not miss being personally present at the title decision at Hockenheim. Rupert Stadler, the Chairman of the Executive Board, as well as his colleagues Michael Dick (Technical Development) and Frank Dreves (Production) will support the brand’s DTM squad on location at the crucial tenth round.

At the Audi Drive Away on race Sunday at 12:20 hrs, 25 Audi TT RS and 14 Audi A5 Sportback cars will drive around the circuit in a parade. The vehicles will be handed over to dealerships at Hockenheim by the German sales organization.

For its VIP guests at Hockenheim, Audi will host a race party at the Audi Lounge on Saturday night. A band and a DJ will guarantee top-class musical entertainment.

Some 1,600 Audi employees will keep their fingers crossed for the Audi drivers at Hockenheim. Prior to the start of the race they will attract attention to their group with a 25- by 10-meter banner.

Audi’s 100th anniversary celebrations at the Neckarsulm location on October 16 and 17 included a large motorsport presence. One week before the DTM finale, Mattias Ekström, Timo Scheider, Markus Winkelhock and Mike Rockenfeller treated the fans to autographs and driving demonstrations of current and historic race cars, from the quattro to the DTM vehicle. The Audi Sport teams Abt Sportsline, Joest and Rosberg were on hand at Neckarsulm as well.