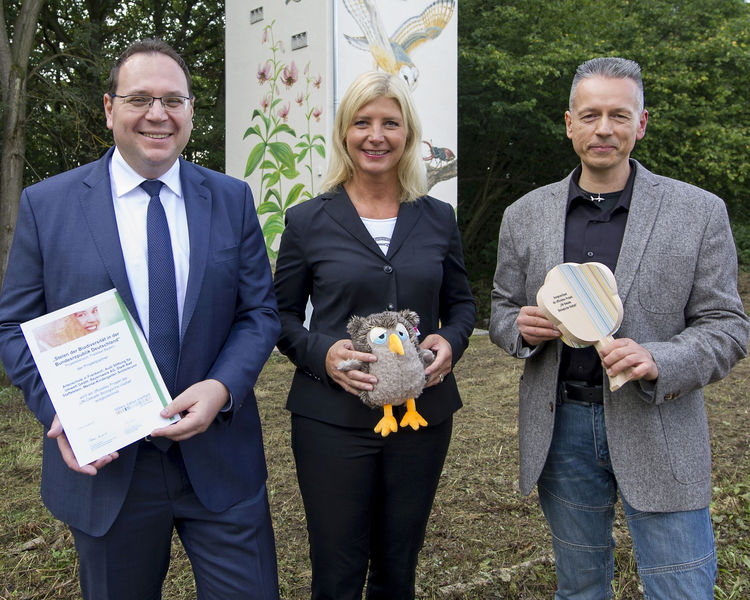 The “Columns of Diversity” project, which was implemented jointly by the Audi Environmental Foundation and the association Species Protection in Franconia, has been recognized with immediate effect as an official project within the Decade on Biodiversity of the United Nations. With four converted transformer towers in four federal states of Germany, the foundation and the association have been working to protect species and to spread environmental awareness for two years now. Bavaria’s Environmental Minister Ulrike Scharf recognized this commitment with the UN prize in Bad Staffelstein on Thursday.

“We are very proud of this recognition in the context of the UN Decade on Biodiversity. It shows that with our commitment, we are making a valuable contribution towards implementing this strategy,” stated Dr. Rüdiger Recknagel, Chief Executive of Audi’s Environmental Foundation (Audi Stiftung für Umwelt GmbH). “It is important to us to support projects focused on the protection of species and environmental education – also when this is far away from the production of automobiles.” Since December 2014, the Audi Environmental Foundation and Species Protection in Franconia have been converting disused transformer stations into spaces for endangered fauna to live and breed. Meanwhile, four transformer stations – in Suhl (Thuringia), Ittlingen (Baden‑Württemberg), Kastellaun (Rhineland‑Palatinate) and Bad Staffelstein (Bavaria) – offer new homes for example to pipistrelle bats, barn owls and little owls.

The United Nations declared the Decade on Biodiversity from 2011 until 2020 with the goal of halting the worldwide decline in biological diversity. Prizes are awarded to projects that are exemplary in this context for species protection, sustainability or the communication of ecological values – like the Columns of Biodiversity. On behalf of the United Nations, the Environment Minister of the State of Bavaria, Ulrike Scharf, handed over a “tree of diversity,” a colored wooden sculpture symbolizing the abundance and uniqueness of nature. The UN Decade on Biodiversity prize will also be awarded to the other three Columns of Diversity in the coming weeks.

With the Columns of Diversity, the Audi Environmental Foundation is supporting the protection of species itself as well, as the understanding of the issue. Information boards and QR codes on the artistically decorated towers provide extensive details of the project and of the characteristics and habits of the animals and birds living there. Interested parties can also observe the inhabitants of the transformer towers in Suhl and Bad Staffelstein via webcams.