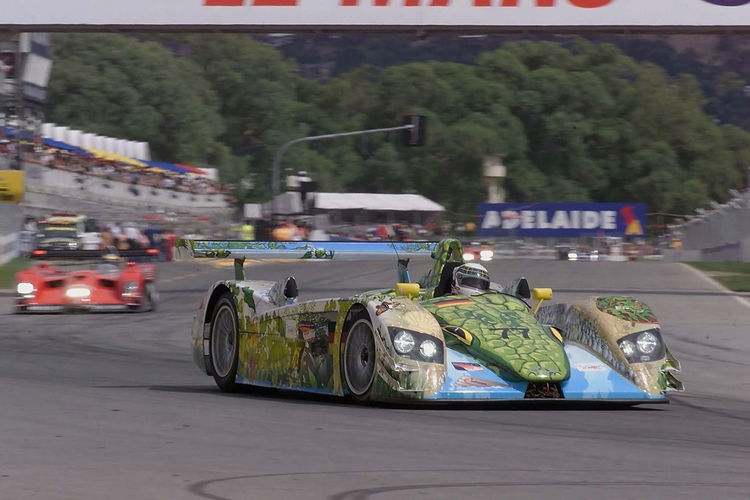 In 2000 the last race in the American Le Mans Series (ALMS) was held in Adelaide, Australia, and the Audi R8 startled spectators by appearing with a “Crocodile” paint scheme. It can be admired on the Audi stand at the Techno Classica in Essen.
Download PDF (195 KB)
Facebook
Twitter
LinkedIn
WhatsApp

Audi Tradition is celebrating not one but two anniversaries at the Techno Classica in Essen (April 10 to 14). In Hall 7 of the world’s largest classic car fair, the brand with the four-ring emblem is displaying examples from the history of its V8 engines. 80 years have elapsed since Audi’s associate company Horch exhibited the new 830 model at the Berlin Motor Show, powered by that company’s first V8 engine. 25 years later the Audi V8 went into production and represented a milestone in Audi’s history – access to the premium segment of the market.

Ample space for history: the Historical Department of AUDI AG has a 700 square metre stand in Hall 7. Members of the Audi Club International (ACI) are displaying other cars that bear witness to the company’s history in Hall 7.1. This gives the four-ring emblem two attractive meeting points for visitors to the world’s largest classic car fair.

In 1933, when Auto Union introduced the first Horch with a V8 engine, it reflected know-how from the USA. But the company developed this V8 according to its own principles: one that we would today regard as a high-performance engine with the appropriate sound, although the company’s motives were in fact different. Horch, the epitome of luxury car design between the wars, wanted to save space in the engine compartment and cut costs. Since 1927 it had built only cars with straight-eight engines. The new Horch 830 exhibited in Berlin had a three-litre engine and was immediately dubbed the “small Horch”. The model designation, 830, indicated the number of cylinders and the displacement. This second model line rounded off the lower end of the Horch product catalogue. At the Techno Classica, Audi Tradition is displaying an extremely rare Horch 830 Sport Cabriolet with coachwork by the Gläser company of Dresden. This car dating from 1933, loaned by the August Horch Museum in Zwickau, developed a healthy 70 horsepower in its day.  To complete the picture, a second outstanding Horch car will also be seen.  The streamlined Horch 930 S of 1939 can be regarded as the ultimate Horch V8 development up to the outbreak of the Second World War. Only two of these luxury cars were built, with an aerodynamic body that was well ahead of its time. The war prevented it from going into series production.

One of the highlights of the 1988 Paris Motor Show was the Audi V8. With this model Audi succeeded for the first time since the war in penetrating the large luxury segment of the car market. This eight-cylinder saloon had a great many notable technical features such as permanent all-wheel drive, a light alloy engine with four valves per cylinder, electronically controlled automatic transmission and high-performance disc brakes with the caliper gripping the disc from the inside. The Audi V8 was the manufacturer’s first model to offer a combination of automatic transmission and the quattro permanent all-wheel driveline. At the Techno Classica, Audi Tradition is displaying three special exhibits: a V8 from the first production period, the long-wheelbase Audi V8 L introduced two years later and built in small numbers and, as the last of the three, a unique vehicle: a specially built Avant estate-car version of the Audi V8 based on the Audi 200 Avant.

Motor sport is naturally represented too on the Audi Tradition stand. In 1990 Hans-Joachim Stuck drove the Audi V8 quattro in its first racing season to victory in the German Touring Car Championship (DTM). This 462-bhp “chauffeur-driven limousine” is on display together with another Audi Sport legend: the Audi R8. This “Crocodile” was bound to attract attention: at the final race in the American Le Mans Series (ALMS) on December 31, 2000 in Adelaide, Australia, motor sport fans could scarcely believe their eyes: here, in “Crocodile Dundee” country, Allan McNish and Rinaldo Capello went to the starting line in a “Crocodile design” Audi R8. They won the race, Allan McNish took the drivers’ championship title and Audi the manufacturers’ title.