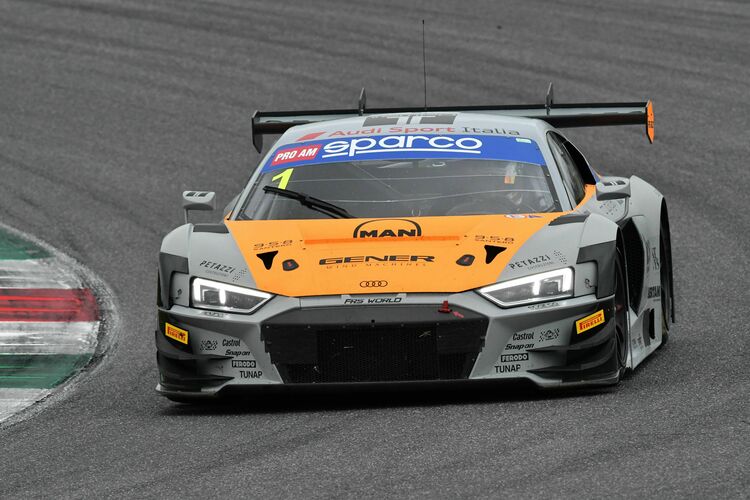 Audi Sport Italia continues its streak after overall titles in Italian GT racing in the past two years and now won the amateur title for the first time. At the same time, Audi customer teams again celebrated victories in the overall and TCR rankings at the eighth round of the Nürburgring Langstrecken-Serie on the Nordschleife.

Another title win in Italy: Audi Sport Italia concluded the 2022 season with a championship success. Emilio Radaelli’s tradition-steeped company, which was an Audi Sport customer racing customer from the very beginning in 2009, won the amateur classification of the Campionato Italiano Gran Turismo Sprint. After overall championship successes in 2011, 2020 in the Sprint classification and 2021 in Sprint and Endurance, Audi Sport Italia raced for a class title for the first time this year. The two new signings Marco Butti and Simone Patrinicola dominated the Am category with four wins and two second places on the first three race weekends. At the finale in Mugello, the driver pairing was promoted to the Pro-Am class. Marco Butti, only 17 years old, captured pole position for the final sprint in Tuscany. For 19 laps, the northern Italian led the field. In the end, Patrinicola crossed the finish line in third place after the driver change. But a 25-second penalty after the race for a collision with another competitor threw the duo back to seventh place. As a result, they remained the second-best Pro-Am squad. Overall, Audi Sport Italia looks back on a successful season. For both drivers, the amateur title is the most significant success in their young careers. Like Marco Butti, the 29-year-old Sicilian Simone Patrinicola completed his first season with Audi Sport Italia in GT3 racing and won this classification straight away. Butti competed in parallel in the TCR Europe in Comtoyou Racing’s Audi RS 3 LMS and clinched the rookie title there.

Second one-two in a row: 14 days after its previous success in the Nürburgring Langstrecken-Serie, Scherer Sport Team Phoenix managed the next one-two with the Audi R8 LMS. Once again, Kuba Giermaziak, who triumphed for the third time this year, won ahead of Audi Sport driver Frank Stippler and his teammate Vincent Kolb. Privateer Giermaziak shared the cockpit with Audi Sport driver Kelvin van der Linde this time. After 27 laps, the Polish-South African driver duo established an advantage of 28.797 seconds over the sister car for Ernst Moser’s outfit. Giermaziak had clinched his first victory of the season in June with Audi Sport driver René Rast, his second with Audi Sport driver Luca Engstler and privateer Kim-Luis Schramm. While touring car teams traditionally have the best chances in the overall series standings due to the scoring system, Scherer Sport Team Phoenix nevertheless has every reason to be confident. Kuba Giermaziak leads the SP9 Pro class by nine points ahead of Kolb/Stippler. Before the finale, the number 16 Audi R8 LMS is also ahead of the number 5 sister car and numerous other opponents in both the Nimex Team Trophy and the NLS Speed Trophy.

A decent season finale: At the seventh and final round of the ADAC GT Masters season, Audi Sport customer racing clinched a podium for the eighth time this year thanks to a customer team. Audi Sport driver Ricardo Feller, who shares the cockpit of an Audi R8 LMS from Montaplast by Land-Motorsport with Jusuf Owega, overtook his rival Ayhancan Güven, who was on pole position, at the start. However, despite Feller’s fastest race lap, the Land Audi was unable to hold off the Drago Racing Team’s Mercedes and finished second in the second race at Hockenheim, beaten by just 1.8 seconds. Team Montaplast by Land-Motorsport secured third overall in the team standings at the end of the season in a field of 15 outfits. In the ADAC GT Masters Trophy, Team Car Collection Motorsport had reason to celebrate. Privateer Florian Spengler, who shared the cockpit with Audi Sport driver Markus Winkelhock, decided this category for non-professional drivers in his favor for the second time in a row.

Second place and the lead in the standings: Audi’s customer teams did not experience an ideal fifth race weekend in the GT World Challenge Australia. Mercedes driver Prince Jefri Ibrahim spun the Audi R8 LMS of leader of the standings Yasser Shahin after a controversial start at The Bend Motorsport Park and collected a 15-second penalty for this. Liam Talbot later overtook leader Ibrahim in the Shannons Insurance Team Audi and built up an eight-second lead by the time of the driver change. Fraser Ross took over the car from Talbot and led the 60-minute contest for a long time. Only on the last lap did Mercedes driver Broc Feeney manage to overtake his Audi rival. Talbot/Ross were beaten by only two seconds. Fourth place went to Yasser Shahin/Garth Tander from The Bend Motorsport Park team. After bad weather prevented the second race from being held, Shahin now leads the Pro Am standings by eleven points ahead of Ibrahim, while Talbot is a further three points behind in third. Two events are still in the calendar until the beginning of December.

Podium in Spain: Pierre Arraou scored a podium result at the fifth round of the Campeonato España de Resistencia in Navarra. The Frenchman finished second in the GPR class in his Audi R8 LMS GT4 in the first 50-minute race.

Runner-up in the ADAC TCR Germany: Jessica Bäckman secured the second championship position in her debut season in the ADAC TCR Germany at the finale. The Swede, who had started the year with Hyundai, had switched to Team Comtoyou Racing for the final four races. At the wheel of an Audi RS 3 LMS she has celebrated one third and two second places since the end of September. At the finale at Hockenheim, she overtook the newly crowned champion Martin Andersen in the final sprint from grid position three. The 25-year-old Scandinavian crossed the finish line half a second ahead of the Dane in second place after 18 laps. She thus relegated Szymon Ladniak to third place overall in the standings with a two-point lead. In the 2022 ADAC TCR Germany Junior Challenge, Audi customer Max Gruhn finished the season in third position.

Sixth Audi victory on the Nordschleife: The Audi RS 3 LMS remains unbeaten in the TCR category of the Nürburgring Langstrecken-Serie in the 2022 season. For the second time in a row, Møller Bil Motorsport prevailed in this touring car category. At the eighth event, the Münsterland Cup, the three Norwegians Anders Lindstad/Kenneth Østvold/Håkon Schjærin won their classification after four hours of racing with a two-lap lead.

Podium at the finale: Bradley Hutchison managed to finish the season on the podium in the TCR UK. The Audi privateer finished third in the RS 3 LMS entered by Team Bond it with MPHR in the first sprint at Snetterton in a field of 17 competitors.