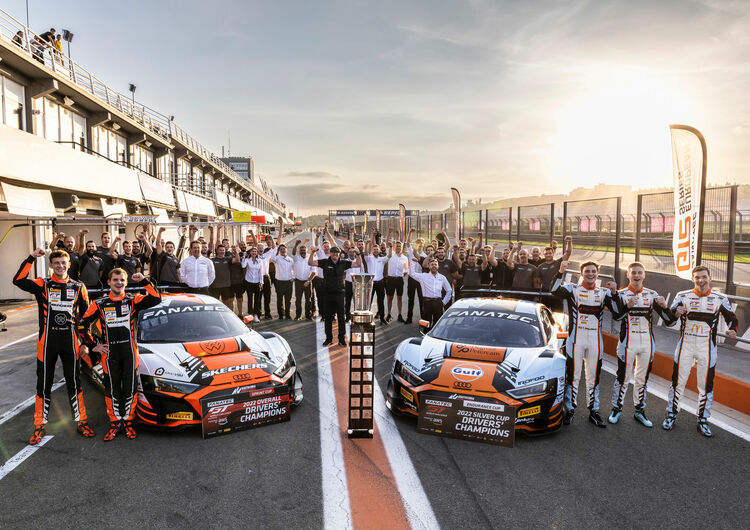 Audi Sport customer racing celebrated successes with its customers around the globe on the third weekend in September. Outstanding were the GT3 Sprint Championship as well as the Silver Cup success in the GT World Challenge Europe, an early GT2 European title as well as a championship success in Norway.

Hat-trick in the GT World Challenge Europe: The two Audi Sport drivers Dries Vanthoor and Charles Weerts have won a title for the third time in a row at Valencia. After 2020 and 2021, the two Belgians with Team WRT have once again decided the Fanatec GT World Challenge Europe powered by AWS sprint drivers classification in their favor. After four wins this season, third place in the first race at the finale in Spain was enough for them to secure the success early. Vincent Vosse’s team had already won the Sprint Cup in 2016 and 2017 with its former drivers. The R8 LMS of Team Tresor by Car Collection crossed the finish line half a second ahead of the Belgian Audi. Audi Sport driver Christopher Haase, together with Simon Gachet in second place, achieved the team’s best result of the season in the Sprint Cup. The second race was spectacular. On a drying track, the old and new champions managed to leave two rivals behind them from third place thanks to a daring tire choice. Charles Weerts was running on slicks which only built up enough grip at the end on drier asphalt. As a result, he overtook the Audi R8 LMS of Aurélien Panis’ Saintéloc Junior Team, who in turn was fighting for victory with Mercedes-AMG driver Timur Boguslavskiy. Eventually, Weerts passed the Mercedes-AMG before Panis also pushed his way into second place at the final corner. To great cheers in the pits, Audi Sport customer racing thus clinched a one-two victory for Vanthoor/Weerts ahead of Patric Niederhauser/Aurélien Panis. The Sprint Cup team classification also went to Team WRT again. In addition, customers Benjamin Goethe/Thomas Neubauer won the Silver Cup of the overall Sprint and Endurance standings early after having clinched the Endurance title earlier.

Leading margin doubled: Audi privateer Yasser Shahin extended his lead in the GT World Challenge Australia standings from 10 to 20 points on the fourth race weekend at Sandown. In the process, last year’s champion had to master the most difficult conditions together with teammate Garth Tander. In the first race, Shahin spun early on, while Tander also went off the track later after the driver change while fighting for position. After a downpour the race ended prematurely behind the safety car. Shahin/Tander finished second in the Audi R8 LMS ahead of their brand colleagues Liam Talbot/Fraser Ross. Heavy rain characterized the second one-hour race as well and forced a 20-minute race interruption. The decision was made only on the turbulent last lap. First, Audi privateer Tony Bates overtook Mercedes-AMG driver Prince Jefri Ibrahim who was in the lead and lost another place when Yasser Shahin passed him as well. When Bates subsequently spun on a trickle, Shahin won ahead of Liam Talbot and Prince Jefri Ibrahim. This is exactly the order in which the rivals are now competing for the title: Shahin leads the Pro-Am standings ahead of Talbot, with Ibrahim and teammate Shane van Gisbergen lurking another four points behind. Three events are still on the calendar until the beginning of December.

Title success in Norway: Wiggo Dalmo has won the Norwegian Racing NM championship with the Audi R8 LMS. The Audi privateer celebrated three more sprint victories at the finale at Rudskogen. Dalmo thus remained unbeaten in all 15 races he contested this year. The Audi customer has built up a lead of 110 points over the course of six race weekends.

Three trophies in South Africa: Charl Arangies fulfilled his role as one of the favorites in all three sprints at the sixth event of the G&H Transport Extreme Supercars Series in South Africa. The South African won the first race on the Killarney circuit in an Audi R8 LMS by four tenths of a second ahead of Stradale teammate Jonathan du Toit, who was driving a Lamborghini. In the second sprint, Arangies finished third behind Porsche driver Franco Scribante and Jonathan du Toit. In the third race, Audi driver Arangies had to concede second place to his teammate du Toit by only seven tenths of a second.

Second one-two-three result this year: After the Audi R8 LMS GT2 clinched a one-two-three for the first time at the season opener of the GT2 European Series at Imola, all podium places in the first race of the fifth event at Valencia went to Audi Sport customer racing teams as well. The first 50-minute race was won by PK Carsport with Nicolas Saelens and Stienes Longin. The two Belgians celebrated their third victory of the season after Stienes Longin tactically benefited from an early pit stop and took the lead after the driver change. The two Italians Stefano Costantini/Luca Pirri finished second for the Italian team LP Racing, their best result of the season. Peter Guelinckx/Bert Longin finished third with PK Carsport. In the second race, PK Carsport was again the best Audi team. After a half spin by Nicolas Saelens, the Belgian finished second with his compatriot Stienes Longin. The Danish team High Class Racing rounded off the podium with Aurelijus Rusteika/Michael Vergers in another Audi R8 LMS GT2. Saelens/Longin had traveled to Spain level on points with Štefan Rosina but have now pulled five points clear of the Slovakian KTM driver in the Pro-Am standings. In the Am class, an early title decision was already made in Valencia in favor of the LP Racing team. After his season wins number 5 and 6 in the amateur classification, French solo driver Henry Hassid can no longer be caught in this category in the Audi R8 LMS GT2 at the finale in October.

Appealing performance: Kwanda Mokoena put in a good showing in the Audi R8 LMS GT4 at the sixth round of the mixed sportscar series G&H Transport Supercars Series in Killarney. The South African from the Amandia Coal Into Africa team achieved overall results in his production-based GT4 sportscar with tenth, twelfth and eighth places in each of the three sprints amidst more powerful GT3 sportscars.

Third win of the season in Italy: Felipe Fernández celebrated a start-finish victory in the final race of the TCR Italy 2022. The Spanish privateer driver from Team Auto Club RC2 Valles won nine-tenths of a second ahead of Honda driver Ruben Volt after 15 race laps at the sixth event in Vallelunga. It was the third win of the season for an Audi customer, after Gil Ruben Fernández – the brother of winner Felipe – had won at Imola in May and Denis Babuin had also been unbeatable at Imola in early September. Another trophy at the finale was won by Team Elite Motorsport: In Saturday’s sprint, Nicola Baldan, who has only competed in the last two events, finished second in the Audi RS 3 LMS.

Stunning weekend in Australia: William Brown was as good as he has ever been this year on the sixth race weekend of TCR Australia. The Australian privateer finished the first sprint at Sandown in second place in the Audi RS 3 LMS after his brand colleague Jay Hanson, who was in second place, spun on the last lap in the battle for overall victory. In race two, Brown kept his cool in the rain to finish third after several competitors ahead of him dropped back or retired due to body contact and aquaplaning. At the start of race three, Brown initially dropped back to fourth, but again overtook two competitors. After a driving error by the leader, Brown took the top spot and celebrated his first win of the season by 1.1 seconds. The MPC Team Liqui Moly driver thus improved to third in the standings. This means he still has a mathematical chance of winning the title at the finale in Bathurst in November.

Endurance success in Spain: Jorge Silva and Pedro da Silva in the Audi RS 3 LMS were the best TCR team on the fourth weekend of the Campeonato de España Resistencia. The two Portuguese finished second in a mixed touring car class in the Veloso Motorsport touring car with a 33-second gap after two hours of racing at Jerez.

First podium in South America: At the seventh round of the TCR South America at Buenos Aires, the Cobra Racing Team achieved its best result of the season in a well-stocked field of 14 competitors. Gabriel Lusquiños in the Brazilian squad’s Audi RS 3 LMS started the second sprint race in second place. The Brazilian maintained his position all the way to the finish, helping the Cobra Racing Team to its first trophy this year.