The new Audi A8: future of the luxury class 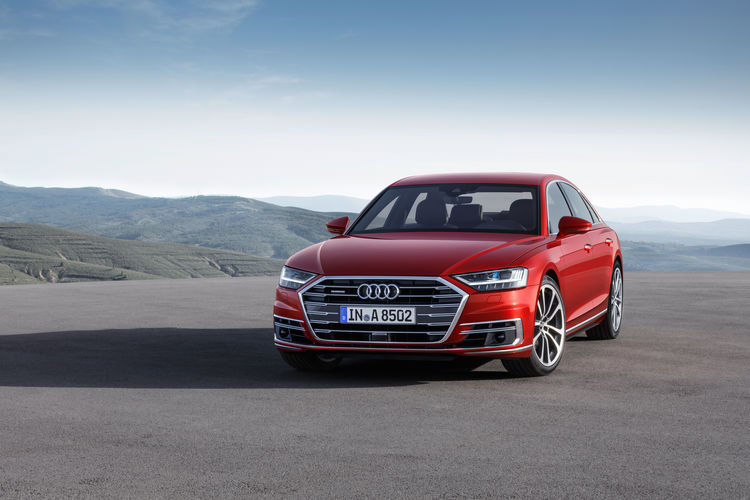 Today is where the future begins in the luxury class: The new Audi A8 makes its world debut at the Audi Summit in Barcelona. In its fourth generation, the flagship model again provides the benchmark for Vorsprung durch Technik – with a new design language, an innovative touchscreen operating concept and a systematically electrified drive. The Audi A8 is also the first production automobile in the world to have been developed for highly automated driving. From 2018, Audi will gradually be taking piloted driving functions such as parking pilot, garage pilot and traffic jam pilot into production.

Doyen of style: the exterior design
The Audi A8 is stylistically defining – it signals the dawning of a new design era for the entire brand. The front end with the wide, upright Singleframe grille and the fluid, muscular body symbolize sporty elegance, sophistication and progressive status. The new A8 delivers on the promise made by the Audi prologue design study. The luxury sedan possesses a powerful presence – whether in the 5.17 meter (17.0 ft) standard version or the A8 L, which has a 13 centimeter (5.1 in) longer wheelbase.

The Audi brand is renowned worldwide for sports appeal, lightweight construction and quattro permanent all-wheel drive – and the design of the new A8 conveys these values. The balanced proportions emphasize all four wheels in equal measure. Muscular shapes above the wheel arches give visual expression to the quattro drive. Viewed side-on, the upright front end combined with the gently inclined rear create visual tension. The flagship model proclaims its identity both day and night, drawing on both the striking HD Matrix LED headlights with Audi laser lighting, and the LED light strip combined with OLED technology rear lights. These produce unique light animations as the driver approaches and leaves the car.

Luxury lounge: the interior
Freedom is the defining design feature with a new luxury slant. This explains the A8’s resemblance to a lavish, spacious lounge. Compared to the predecessor model, it has grown substantially in length in both body versions.

The range of equipment and materials is extensive, with every detail radiating superlative bespoke quality – from the perforation in the seat upholstery to the electrically opened and closed shutters on the air vents.

The classiest seat in the new Audi flagship model is in the rear right – the optional relaxation seat in the A8 L that comes with four different adjustment options and a footrest. In this seat, the passenger can warm and massage the soles of their feet on a unit with multiple settings incorporated into the back of the front-passenger seat. The new comfort head restraints complete the experience. The rear passengers can also control an array of functions such as ambient lighting, the new HD Matrix reading lights and seat massage, plus make private phone calls, via a separate operating unit. The rear seat remote, with its OLED display as large as a smartphone, is a removable unit housed in the center armrest.

Fingertip response: the controls
The luxury sedan’s interior deliberately adopts a reductive design; the interior architecture is clear and with a strictly horizontal orientation. Audi carries its high quality standards into the digital age with a radically new operating concept. It does away with the familiar rotary pushbutton and touchpad of the predecessor model. The instrument panel is kept largely clear of buttons and switches. At its center is a 10.1-inch touchscreen display which, when off, blends almost invisibly into the high-gloss black surround thanks to its black-panel look.

The user interface appears as soon as the car is opened. The driver controls the Infotainment system with fingertip control on the large display. They can use a second touchscreen display on the center tunnel console to access the air conditioning and comfort functions as well as make text inputs. When the driver activates a function in the upper or lower display, they hear and feel a click by way of confirmation. The glass-look operating buttons respond in the same way. The combination of acoustic and tactile feedback along with the use of common touch gestures such as swiping make the new MMI touch response especially safe, intuitive and quick to use.

The A8 can also engage in intelligent conversation. The driver can activate an array of functions in the automobile using a new, natural form of voice control. Information on destinations and media is either available on board or is delivered from the cloud at LTE speed. The extensive Audi connect range also includes traffic sign recognition and hazard information – innovative car-to-X services that draw on the swarm intelligence of the Audi fleet.

The extensively optimized navigation is another new feature: It is self-learning, based on the route just driven. This provides the driver with intelligent search suggestions. The map also incorporates highly detailed 3D models of major European cities.

World premiere: the pilot-driving Audi A8
The new A8 is the first production automobile to have been developed specially for Level 3 automated driving. The Audi AI traffic jam pilot takes charge of driving in slow-moving traffic at up to 60 km/h (37.3 mph) on freeways and highways where a physical barrier separates the two carriageways. The system is activated using the AI button on the center console.

Because traffic jam pilot is capable of handling the full driving task – acceleration, steering and braking – when certain conditions are met, drivers can take their hands off the steering wheel until the car requires manual driver control again. This takeover request occurs before the system nears the limits of its capabilities.

From a technical perspective the traffic jam pilot is revolutionary. During piloted driving, a central driver assistance controller (zFAS) now permanently computes an image of the surroundings by merging the sensor data. As well as the radar sensors, a front camera and the ultrasonic sensors, Audi is the first car manufacturer also to use a laser scanner. The introduction of the Audi AI traffic jam pilot means the statutory framework will need to be clarified in each individual market, along with the country-specific definition of the application and testing of the system. The brand’s high quality standards are equally applicable in the realm of highly automated driving. In addition, a range of approval procedures and their corresponding timescales will need to be observed worldwide. Audi will therefore be adopting a step-by-step approach to the introduction of the traffic jam pilot in production models.

The Audi AI remote parking pilot and the Audi AI remote garage pilot autonomously steer the A8 into and out of a parking space or a garage, while the maneuver is monitored by the driver. The driver need not be sitting in the car. They start the appropriate system from their smartphone using the new myAudi app. To monitor the parking maneuver, they hold the Audi AI button pressed to watch a live display from the car’s 360 degree cameras on their device.

New dimension: the suspension
With a whole package of innovations, the suspension revisits the very limits of what is physically possible. One such innovation is dynamic all-wheel steering, which combines direct, sporty steering with unshakable stability. The steering ratio for the front wheels varies as a function of speed; the rear wheels are turned in or against the direction of steering depending on the speed range. The car’s handling becomes even more dynamic and precise with the sport differential. This actively distributes the drive torque between the rear wheels, complementing the quattro permanent all-wheel drive that is now standard in the new A8.

The second new technology, Audi AI active suspension, is a fully active suspension system. Depending on the driver’s wishes and the driving situation, it is capable of raising or lowering each wheel separately with electric actuators. This flexibility imparts the driving characteristic with huge latitude – ranging from the smooth ride comfort of a classic luxury sedan to the dynamism of a sports car. In combination with pre sense 360°, the car is raised with lighting speed if there is an impending lateral collision, reducing the potential consequences of the accident for all occupants.

Mild hybrid: the drives
The new A8 starts out in the German market with two extensively reengineered V6 turbo engines. Other engine versions and a plug-in-hybrid with inductive in-car charging will follow in 2018. All engines operate in conjunction with a belt alternator starter (BAS), which is the nerve center of the 48-volt electrical system. This mild hybrid technology (MHEV, mild hybrid electric vehicle) enables the car to coast with the engine switched off, and to restart smoothly. It also has an extended start/stop function and an energy recovery output of up to 12 kW. The combined effect of these measures is to bring down the fuel consumption of the already efficient engines even further – by as much as 0.7 liters (0.2 US gal) per 100 kilometers (62.1 mi) in real driving conditions.

More information on the new Audi A8 is available in the Audi Media Center at:
www.audi-mediacenter.com/de/pressemappen/audi-a8 and in the new Audi Encounter Technology Magazine at: audi-encounter.com.