The new Audi A6 L e-tron for China

A perfect match. Stella McCartney, the world-renowned designer of sustainable fashion, meets the new, fully electric Audi e- tron GT quattro with optional leather-free interior. Experience two pioneers who are shaping the future, proving that premium and sustainability can form a promising alliance #FutureIsAnAttitude #Audi #etron #etronGT #sustainability https://at.audi/SMC -------------------- *Power consumption combined: 19.6-18.8 kWh/100km (NEDC); 21.6-19.9 kWh/100km (WLTP); CO2 emissions combined: 0 g/km. Information on fuel/electricity consumption and CO2 emissions in ranges depending on the equipment and accessories of the car. Further information on official fuel consumption figures and the official specific CO₂ emissions of new passenger cars can be found in the “Guide on the fuel economy, CO₂ emissions and power consumption of new passenger car models”, which is available free of charge at all sales dealerships and from DAT Deutsche Automobil Treuhand GmbH, Hellmuth-Hirth-Str. 1, D-73760 Ostfildern, Germany and at www.dat.de.
YouTube 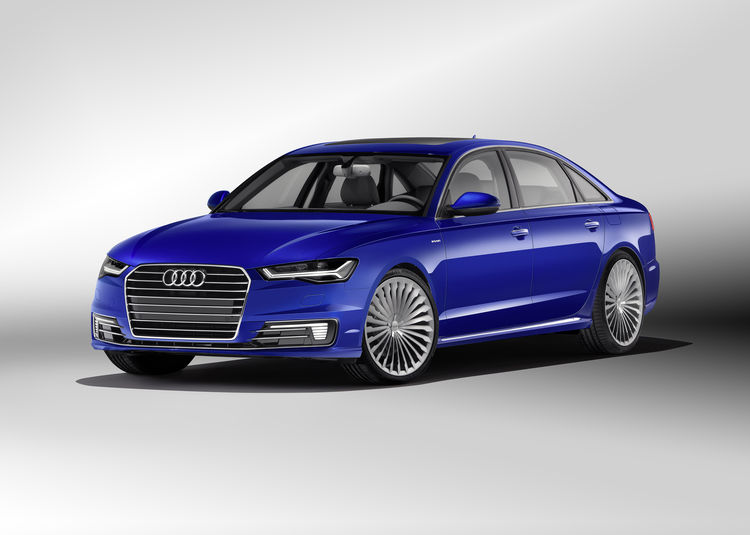 With the A6 L e-tron, Audi is taking an important step toward even greater fuel efficiency in China. The sedan has been developed specifically for the Chinese market. Its plug-in hybrid drive with 180 kW (245 hp) provides for powerful performance. The model consumes on average just 2.2 liters of fuel per 100 kilometers (106.9 US mpg).

After launching the e-tron era in China with the imported A3 Sportback e-tron* in 2015, Audi is taking the next step with the local production of the A6 L e-tron beginning in 2016. The model is based on the long version of the Audi A6, which is already built in China, and is configured as a highly efficient parallel hybrid, meaning that its two drives are arranged one directly behind the other. The 2.0 TFSI is a state-of-the-art, four-cylinder, gasoline engine producing 155 kW (211 hp) and 350 Nm (258.1 lb-ft) of torque. The disk-shaped electric motor provides 91 kW and 220 Nm (162.3 lb-ft) of torque. Together with a decoupler, this is integrated into the eight-speed tiptronic transmission, which transfers the power to the front wheels. System output is 180 kW (245 hp); maximum system torque is 500 Nm (368.8 lb-ft).

Its lithium-ion battery comprises 104 cells and stores 14.1 kWh of energy. Located beneath the luggage compartment, the battery reduces its volume only slightly — capacity is 340 liters (11.9 cu ft). The car thus offers sufficient stowage space for longer trips. The new two-phase charging technology allows charging with 7.2 kW of power. With the appropriate infrastructure (high-power industrial outlet) and high-power charging cable, the batteries can be fully charged in roughly two hours. On a typical household outlet in China, the procedure takes somewhat longer than eight hours, and can thus easily be performed overnight.

Electric driving at up to 135 km/h (83.9 mph)
The intelligent hybrid management system controls the operating states of the Audi A6 L e-tron. The driver can choose between four driving modes. “EV” (electric vehicle) mode prioritizes electric driving at up to 135 km/h (83.9 mph). In “hybrid” mode, the hybrid management system chooses the drive type for the best possible efficiency. In “battery hold” mode, the system stores the available electrical energy and charges the battery in “battery charge” mode. The sedan can coast in hybrid mode — when the driver takes his or her foot off of the accelerator, both drives are deactivated. The electric motor assumes most of the braking, charging the battery. The hydraulic brakes are used only for heavy braking.

Controls and displays
The displays of the Audi A6 L e-tron provide detailed information about the status of the drivetrain and the battery charge. The powermeter in the instrument cluster displays the total system output. The monitor for the MMI navigation plus visualizes the energy flows in the hybrid system; range and consumption figures for electricity and gasoline are displayed in the driver information system.

A number of visual cues identify the plug-in hybrid models from Audi. The 18-inch alloy wheels feature the delicate e-tron design, and LED light guides in the air inlets generate a signature of staggered lines. e-tron badges adorn the fenders and the trunk lid; the diffuser conceals the exhaust system tailpipes.

All the strengths of the A6 model series*
Elegant design, a supremely spacious and cultivated interior, high ride comfort, comprehensively equipped and advanced infotainment — the Audi A6 L e-tron offers all of the strengths of the successful A6 model series. It will be produced by an Audi joint venture with FAW-Volkswagen in the northern Chinese city of Changchun, and will be launched on the Chinese market in 2016.