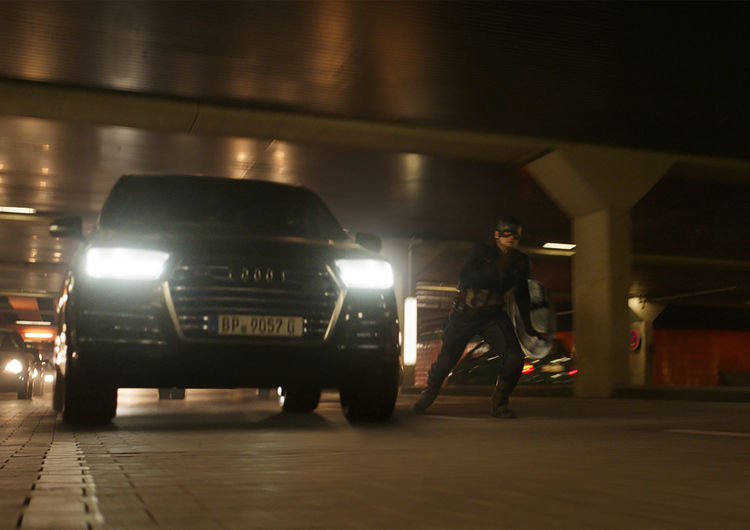 For Marvel fans who can’t wait for the official movie release date on April 28, Audi is already offering an exclusive peek at the spectacular duel in the new Audi SQ7*.

The Super Heroes in Marvel’s Captain America: Civil War drive Audi cars. Also making its Hollywood debut in the third installment is the Audi prologue, as the show car belonging to Black Panther/T’Challa, played by Chadwick Boseman. Robert Downey Jr., who plays Tony Stark/Iron Man, is once again in an Audi R8*, this time as a V10 plus Coupé. The main character, Captain America played by Chris Evans, catches a ride in the new Audi SQ7. “Captain America has superpowers, his trademark is the indestructible Vibranium shield. The Audi SQ7 adds a new superpower to his arsenal, making this sporty SUV the perfect fit for him,” says Anthony Russo, who directed the movie along with his brother Joe Russo. Other vehicles in supporting roles include the new Audi A4 Sedan* and the Audi A7 Sportback*.

In addition to the new Marvel’s Captain America: Civil War movie, directors Anthony and Joe Russo also filmed an exclusive Audi video featuring the chase scene shown in the film and the new Audi SQ7. The video can be viewed online starting on April 18 at audi.com/MarvelCaptainAmerica prior to the release of the movie.

**Figures vary depending on engine/transmission/wheels/tires

ABOUT MARVEL’S CAPTAIN AMERICA: CIVIL WAR
Marvel’s “Captain America: Civil War” finds Steve Rogers leading the newly formed team of Avengers in their continued efforts to safeguard humanity. But after another incident involving the Avengers results in collateral damage, political pressure mounts to install a system of accountability, headed by a governing body to oversee and direct the team. The new status quo fractures the Avengers, resulting in two camps - one led by Steve Rogers and his desire for the Avengers to remain free to defend humanity without government interference, and the other following Tony Stark’s surprising decision to support government oversight and accountability.

Anthony & Joe Russo are directing with Kevin Feige producing. Louis D’Esposito, Victoria Alonso, Patricia Whitcher, Nate Moore and Stan Lee are the executive producers. The screenplay is by Christopher Markus & Stephen McFeely. Get ready to pick a side and join the nonstop action playing out on two fronts when Marvel’s “Captain America: Civil War” opens in U.S. theaters on May 6, 2016.

ABOUT MARVEL ENTERTAINMENT
Marvel Entertainment, LLC, a wholly-owned subsidiary of The Walt Disney Company, is one of the world's most prominent character-based entertainment companies, built on a proven library of more than 8,000 characters featured in a variety of media over seventy-five years. Marvel utilizes its character franchises in entertainment, licensing and publishing. For more information visit marvel.com. © 2016 MARVEL