{{ activeItem() }}
Twitter
07/02/22
Guided by the lights. The fully electric Audi RS e-tron GT shines bright with its cutting-edge Matrix LED headlight… https://t.co/GhIEl4CTOa
07/01/22
Save the date and join @VWGroup for an electrifying livestream. https://t.co/4WlyntUlJG
07/01/22
Your signature style, in lights. Star with the fully electric Audi Q4 Sportback e-tron and its selectable daytime r… https://t.co/3mWwW9iPs1
06/30/22
Immersive mobility. Audi has partnered with the @MOTF in Dubai, where visitors can experience life in 2071. Read mo… https://t.co/EcwufcJlCe
Audi on Twitter
YouTube
06/27/22 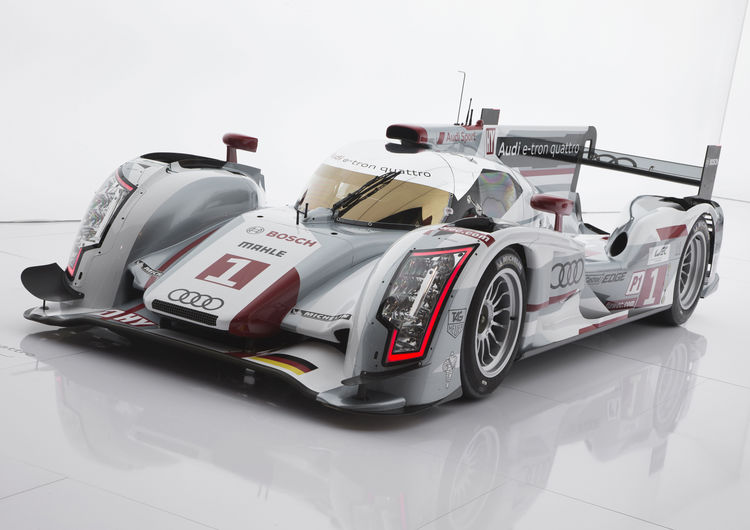 The Audi R18 e-tron quattro, the winner of the 2012 24 Hours of Le Mans, follows a concept all of its own. The hybrid drive of the LMP1 prototype is designed for motor sport conditions – the most intensive test environment for production development.

Motor sport is part of the Audi DNA – the brand has been exploring new technologies in a competition environment for many years, starting with quattro permanent all-wheel drive more than 30 years ago. The 24 Hours of Le Mans is a particularly exciting test environment because the regulations of the Automobile Club de l’Ouest (ACO) explicitly encourage technical innovations.

Since the first appearance of Audi in 1999 it has won on eleven occasions, often thanks to major innovations. The win of the R8 in 2001 was the first triumph for a direct-injection TFSI gasoline engine. In 2006, the Audi R10 TDI became the first diesel to win at Le Mans, and in 2012, the Audi R18 e-tron quattro was the first hybrid concept to clinch victory. A few months ago, a jury of the ACO voted this car one of the ten most significant Le Mans racing cars of all time, along with the R10 TDI.

The concept behind the Audi R18 e-tron quattro is unprecedented in LMP sport, and its realization a pioneering achievement. In the first development step, the engineers from Audi Sport and their partners investigated a wide variety of solutions. These included a parallel hybrid, where both drive systems propel the rear wheels. After weighing up considerations such as traction, handling characteristics, packaging and weight distribution, they ultimately decided to separate the drive systems by axle – the combustion engine drives the rear wheels permanently, and the electric drive propels the front wheels on demand.

Audi had to modify the V6 TDI combustion engine with a displacement of 3.7 liters compared with the previous year’s version. The air restrictor specified for 2013 with a diameter of 45.1 millimeters (1.78 in), 0.7 millimeters (0.03 in) smaller than in the previous season, limits the output to about 360 kW (490 hp), but torque could be maintained at around 850 Nm (626.93 lb-ft). A special layout permits short gas paths: The exhaust end is inside the vee of the cylinder banks, which has a 120 degree angle to keep the center of gravity low. The large turbocharger, limited to a boost pressure of 2.8 bar, assists the spontaneous torque buildup with its variable geometry. As last year, the tank capacity is 58 liters (15.32 US gallons).

A sequential six-speed transmission, like the engine of unitary construction, directs the forces to the rear wheels through a locking differential. The housing is made from ultra-lightweight carbon-fiber-reinforced polymer (CFRP) with titanium inserts. Along with the single-section monocoque, which consists of a CFRP matrix with aluminum honeycomb core, it thus helps keep the racing car’s overall weight down.

915 kilograms (2,017.23 lb) unladen weight is the lower limit specified in the ACO regulations for LMP-1 category prototypes. The Audi R18 e-tron quattro is below that figure, but that creates extra scope for arranging ballast weights for optimum effect. The hybrid racing car is much more complex than its conventionally driven predecessor from 2011, but thanks to ultra lightweight construction it is no heavier.

On the 13.629 km (8.47 mile) long Le Mans circuit, about 70 percent of which is driven at full throttle, a lap costs just under 200 megajoules of fuel energy. The organizers have earmarked seven special zones for hybrid racing cars – here, they can recover up to 0.5 megajoule (approx. 0.14 kWh) of energy by braking at the start of a bend. On the R18 e-tron quattro, part of the braking energy benefits the motor generator unit (MGU) that is located at the front axle. Their two permanently excited synchronous machines convert the recovered energy into direct current through power electronics. This current drives a flywheel energy storage system positioned on the left inside the cockpit, again very advantageous in terms of the center of gravity.

It accelerates a CFRP flywheel up to a speed of almost 45,000 rpm. It rotates in an extremely low-friction environment inside a high vacuum generated by two pumps. The flywheel energy storage system, with its aluminum casing, combines high energy density with high charging power.

The fastest sections on the Le Mans circuit are before the two chicanes, before the Mulsanne bend, before the Indianapolis bend and before the first Porsche bend; these are all energy recovery zones. The R18 e-tron quattro brakes into them from a speed of some 300 km/h (186.14 mph) or more – for three to four seconds with retardation of 3 to 4 g.

At these high speeds the energy recovery function has very little effect on brake-force balance, at least in dry conditions. The power output of the hydraulic wheel brakes with their carbon-fiber-reinforced polymer disks is a great deal higher than the energy flowing to the MGU.

When the speed exceeds 120 km/h (74.56 mph), the energy is called up from the storage system again. Converted back into alternating current by the power electronics, it then supplies the MGU’s two electric motors. These jointly feed more than 160 kW to the front wheels via single-stage planetary gears; the central control unit keeps the revs and torque in line with the conditions prevailing at the rear wheels. The racing car temporarily becomes a quattro with four driven wheels.

The driver of the R18 e-tron quattro can adjust energy recovery and boost across several levels at a switch, influencing both intensity and the responsiveness of the brake and accelerator pedals. A great many factors are at work here, such as the current race tactics and strategy, the condition of the brakes and tires, and the quality of road grip. The pit crew continually monitors all driving statuses and supplies the driver with detailed feedback.

With an overall weight of 70 kilograms (154.32 lb), the hybrid components of the Audi R18 e-tron quattro are very light. They have separate water cooling with a low-temperature circuit, and the temperature of the flywheel energy storage system is regulated by an oil-to-water heat exchanger. All high-voltage batteries are strictly isolated from the car’s conventional components.

The 2012 Le Mans winner impressively demonstrates the potential of the hybrid technology of Audi. The winning drivers André Lotterer, Marcel Fässler and Benoît Tréluyer drove significantly faster than in the previous year, averaging 214.468 km/h (133.26 mph) as opposed to 201.266 km/h (125.06 mph). The R18 e-tron quattro was nevertheless around ten percent more fuel-efficient. Its combination of power, speed, efficiency and reliability also proved a winning formula in the FIA’s newly created World Endurance Championship (WEC), in which Audi captured the drivers’ and manufacturers’ trophies in fall 2012.

The Audi R18 e-tron quattro is brimming with ideas that could turn into future production projects – in ultra lightweight construction, in the hybrid strategy and in its automotive control engineering. 2014 will see a completely new set of regulations take effect, bringing motor sport and production development even closer together. The organizers will specify a certain amount of fuel energy from which every participant must extract maximum performance; in terms of engines and hybrid systems, there will be more room for maneuver. The aim is to cut fuel consumption by a further 30 percent.