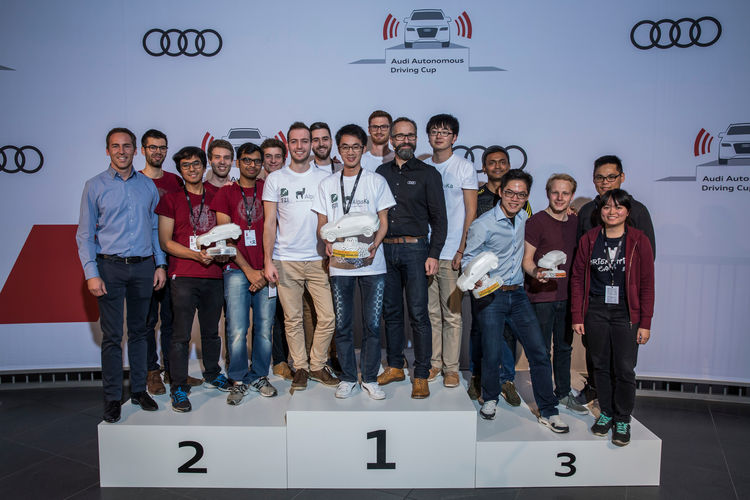 The final of the Audi Autonomous Driving Cup 2018 saw Team AlpaKa fend off the challenge from seven other university teams to win the title. The prize money of 10,000 euros therefore goes to Karlsruhe.

The 2018 winner of the cup was determined in three steps. In the compulsory section, the high-tech model cars prepared by the students – based on a scale 1:8 version of an Audi Q2 – had to perform driving tasks autonomously. For the first time, the participants had access to digital HD map material of the entire course. The teams then gave a scientific presentation of their individual solutions. This was followed by the open challenge, the third component of the competition, where each team made their vehicle perform a task of their choice as creatively as possible. This year, the judges were looking in particular for optimum connectivity and the use of artificial intelligence.

“I was really impressed by the students’ creativity and commitment. The young software developers have exactly what we will need for Audi in the future,” said Thomas Kamla, Head of Strategy and Innovation Management at AUDI AG, who presented the winner’s certificate and 10,000 euros in prize money at the Audi Forum Ingolstadt. Second place, with prize money of 5,000 euros, went to the Team frAISers from the University of Freiburg. Team OptILmDriveX from the Technical University of Ilmenau came third, earning 1,000 euros in prize money. The overall winner AlpaKa also put up the best performance in the open challenge part of the competition. The students developed a car-to-car solution for unclear situations such as breakdowns. The software reports this information to a central office and to other vehicles with the objective of adapted intelligent traffic guidance.

The Audi Autonomous Driving Cup 2018 attracted an international line-up. Ten nominated university teams – including teams from the United Kingdom, Italy and Austria – had been supplied with the basic software and two model cars at a launch event in June 2018. For the test event in October 2018, five teams with identical model cars supplied by their departments were pitted against each other: high-tech model cars with front camera, reversing camera, laser scanner, and ultrasound and acceleration sensors.