Successes for Audi customers on the Nordschleife 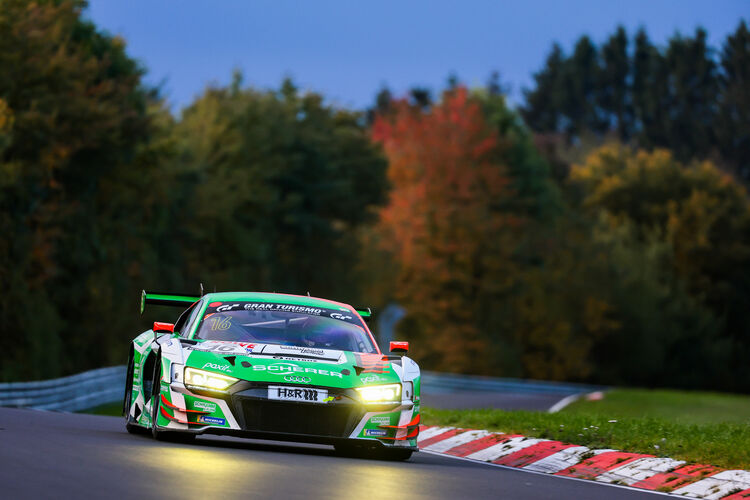 Scherer Sport Team Phoenix managed a one-two on the Nürburgring’s Nordschleife in challenging changing weather. In addition, Audi Sport customer racing recorded successes in the GT2 category and in TCR touring car racing with its customers.

1-2 victory on the Nordschleife: Scherer Sport Team Phoenix celebrated an impressive success with its two Audi R8 LMS cars at the seventh round of the Nürburgring Endurance Series. In difficult weather conditions, Kuba Giermaziak clinched his second victory of the season on the Nordschleife. This time, he shared the cockpit with experienced privateer driver Kim-Luis Schramm. Audi Sport driver Luca Engstler completed the driver trio. The 22-year-old Audi Sport junior knows the Nordschleife from the TCR cockpit, among other cars, but was competing on the 25-kilometer circuit in a GT3 sports car for the first time. After low temperatures in qualifying, a rain shower fell shortly before the start. Like most other teams, Scherer Sport Team Phoenix relied on rain tires and switched to slicks after five laps. When rain fell again after two and a half hours, Engstler stayed on slicks and was able to adapt perfectly to the track conditions thanks to the support of his team. After 28 laps, the trio in the green Audi R8 LMS won by 21.6 seconds ahead of Vincent Kolb and Audi Sport driver Frank Stippler in the blue sister car. After seven of nine races, Giermaziak leads the SP9 Pro standings by five points ahead of Kolb/Stippler. In the NLS Speed Trophäe, Scherer Sport Team Phoenix has overtaken the BMW Walkenhorst squad again and clearly leads the standings: The number 16 Audi is three points ahead of its sister car, number 5, while Walkenhorst, number 34, follows another 47 points behind.

Fourth victory of the season in Belgium: Team PK Carsport won the final round of the Belcar Endurance Championship at Zolder with the Audi R8 LMS GT2. Peter Guelinckx, Bert Longin and Stienes Longin prevailed by just 4.005 seconds after 126 minutes of racing following six lead changes by teams from the three brands Audi, Lamborghini and Porsche. It was the Audi victory with the smallest margin of victory this season. Anthony Kumpen’s Belgian team contests the domestic race series in parallel with its GT2 European Series program and had already decided the GTA class of the Belcar grassroots racing series in its favor before the finale.

Another title in America: Team GMG Racing from California has won the GT2 category of the GT America powered by AWS racing series, as it did last year. Privateer CJ Moses clinched the class wins in both 40-minute races at the season finale in Indianapolis and thus won the GT2 driver category. The team title went to GMG Racing, as it did in 2021.

Fifth victory of the season on the Nordschleife: For the fifth time in six events, the Audi RS 3 LMS dominated the TCR class of the Nürburgring Langstrecken-Serie. After three season victories by Max Kruse Racing and a single one by Team Scherer Sport, the Norwegian team Møller Bil Motorsport now won. Anders Lindstad/Kenneth Østvold/Håkon Schjærin won the TCR classification in the four-hour race with a one-lap lead over a Peugeot from Bonk Motorsport.

Class title in Denmark: Audi Sport customer racing was represented in TCR Denmark for the first time this year and clinched a title at the first attempt thanks to the Meteor Racing customer team. René Povlsen had already celebrated nine class victories in the Trofeo classification over the course of the first six race weekends in the Audi RS 3 LMS. As a result, the Dane came to the finale at the Jyllandsringen as the leader of the standings. There, the driver from central Jutland clinched the Trofeo title early after another class victory in the first of three sprints. It was his second class title in three years and his first with Audi. Team-mate Allan Kristensen finished third in the final standings in this category in another RS 3 LMS in a field of ten entrants.