Success for Audi: The A3 Sportback wins the “Golden Steering Wheel” in the compact class 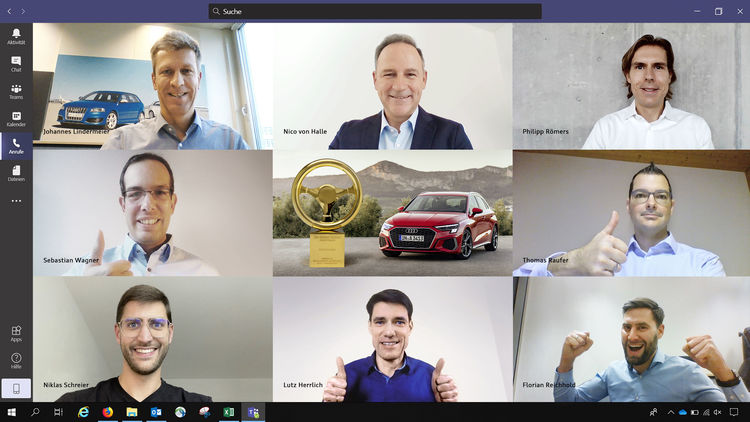 The Audi A3 Sportback has won the “Golden Steering Wheel 2020” in the “Compact Cars” category. In this prestigious competition, readers of the specialist magazine Auto Bild, its affiliated European titles and the Bild am Sonntag newspaper had cast their votes in the summer. From this pre-selection, an international expert jury chose the winners.

“We have continued the success story of our compact model this year with the fourth generation of the Audi A3 Sportback. The ‘Golden Steering Wheel’ award represents a strong team performance that we are proud of,” says Audi CEO Markus Duesmann. The model is exciting for a wide target group and is setting benchmarks in design and digitalization. Project manager Johannes Lindermeier adds: “Our new compact model is sporty, digitalized and highly connected – we on the A3 project team are thoroughly convinced of its qualities. And we are happy that the A3 impressed the many readers and the jury, too.”

The “Golden Steering Wheel” is not only one of the most prestigious car competitions but also one of the oldest in Germany – it was awarded for the first time in 1976. A field of 63 new models, divided into eight classes, entered the competition for the “Golden Steering Wheel 2020.” In each category, the three models that had received the most votes in the readers’ poll qualified for the finals. The final round with 24 cars took place at the DEKRA Lausitzring in early October. At the race track, a jury consisting of international experts assessed the candidates according to criteria based on the test scheme of Auto Bild. The panel included former racing drivers Hans-Joachim Stuck and Joachim Winkelhock, presenters Lina van de Mars and Kai Pflaume as well as experts from Auto Bild and its affiliated titles. The points were awarded under the supervision of a notary.

The Audi A3 has a tradition of winning: In 1996, it became the founder member of the premium compact class as the brand with the four rings established a new segment, and since then it has already won with “Golden Steering Wheel” three times – in 1996, 2012 and 2013. In spring 2020, its fourth generation was launched on the market. Beneath the progressive design of its body, there are a host of innovations that come directly from the full-size class, such as in the infotainment, suspension and driver assist systems. Shortly after the A3 Sportback, the A3 Sedan, the two S models and the new A3 Sportback TFSI e plug-in-hybrid model were launched on the market.