Sprint and endurance victories for the Audi R8 LMS 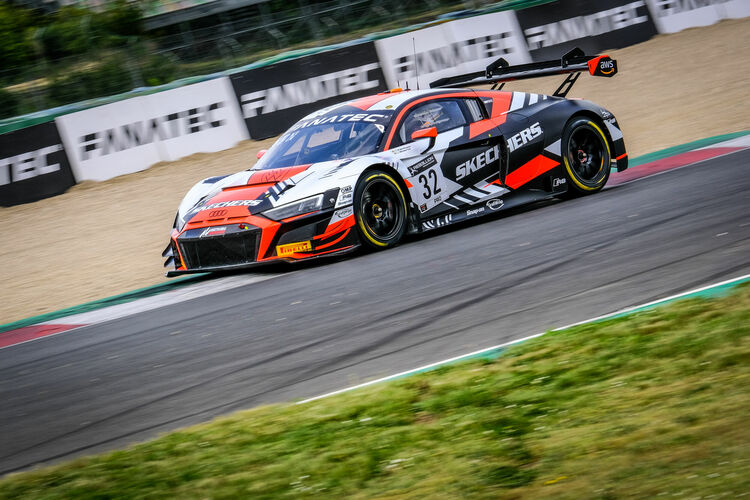 All three variants of the Audi R8 LMS were successful on the third weekend in May: The GT3 sports car won a round of the Fanatec GT World Challenge powered by AWS Sprint Cup and scored a one-two-three in the Hockenheim 12 Hours. The GT2 variant prevailed for the first time in Belgian endurance racing, while the GT4 version recorded its first success of the season in France.

First win of the season for the champions: Dries Vanthoor and Charles Weerts, the winners of the GT World Challenge Europe Sprint Cup of the past two years, celebrated their first victory of the season at Magny-Cours. The two Audi Sport drivers had qualified for second place on the grid in the Audi R8 LMS fielded by Team WRT at the second event – behind the Audi of Simon Gachet and Audi Sport driver Christopher Haase from Team Tresor by Car Collection and ahead of another R8 LMS fielded by the Saintéloc Junior Team with Gilles Magnus/Nicolas Baert. Weerts lost second place to Magnus after the start but gained it back on lap eleven. The key to success was a quick pit stop by WRT that saw Dries Vanthoor return to the track just ahead of Christopher Haase. After Haase had to admit defeat to the attack of a competitor in the Mercedes later on, the order remained unchanged until the finish of Saturday’s race. Weerts/Vanthoor won by 3.1 seconds, position three went to Haase/Gachet ahead of three other Audi cars. In the second sprint race, the Saintéloc Junior Team won another trophy for Audi. Aurélien Panis and Audi Sport driver Patric Niederhauser, who had qualified in third place on the grid for the French team, finished third in an eventful race after a five-second penalty for a hard overtaking maneuver.

Audi’s third victory of the season in the 24H Series: Three Audi customer teams fought a thrilling battle for overall victory with the R8 LMS in the fourth round of the race series at Hockenheim. The Lithuanian team Juta Racing was temporarily in the lead as were the two German squads Phoenix Racing and Car Collection Motorsport. After a total of 377 race laps, Phoenix Racing celebrated victory as it did at the previous 12-hour race in Spa. With Michael Doppelmayr, Elia Erhart and Audi Sport driver Pierre Kaffer, three of the four winners from three weeks ago were again on board. They received reinforcements from Swen Herberger and had completed two laps more than Car Collection Motorsport at the finish. Dr. Johannes Kirchhoff, Max Edelhoff and Elmar Grimm were the best contenders in the Am category as overall runners-up. Third place went to the Lithuanian drivers Julius Adomavičius/Andrius Gelžinis/Jonas Gelžinis from Juta Racing. After Team WRT had already decided the season opener in Dubai in its favor, it was the third victory in four rounds of the club racing series for Audi Sport customer racing.

Opening victory in Belgium: Team PK Carsport enjoyed a good start to the Belcar Endurance Championship. Peter Guelinckx/Bert Longin/Stienes Longin had started from first place into the first race of the season at Zolder. After their Audi R8 LMS GT2 had led the first twelve laps, two Porsches took turns in taking the lead until lap 57. From lap 58, the Audi again moved ahead of the chasing pack. After two hours of racing, the Belgian driver trio won the overall classification with an 18-second lead. This means that PK Carsport under team boss Anthony Kumpen is successful in yet another series. Last year, the Belgian squad was second in the GT2 European Series. In January, it also demonstrated the endurance capability of Audi Sport customer racing’s most powerful model for the first time with a class victory at the Dubai 24 Hours.

From grid position 17 to victory: The Audi customer team Full Motorsport surprised the entire opposition in the GT4 France as the strongest national GT4 racing series in Europe at Magny-Cours. Sacha Bottemanne/Lonni Martins had only qualified for 17th out of 40 grid positions in Saturday’s race of the second event. After the first lap their Audi R8 LMS GT4 was already eleventh, at the pit stop the production-based coupé of Team Full Motorsport was eighth. After that, the race to catch up in the night race continued. After 60 minutes of racing and a time penalty for a BMW that had crossed the finish line in first place, the Silver Cup driver duo in the Audi managed to take the overall victory 4.3 seconds ahead of the nearest rival. For the Audi R8 LMS GT4, it was the first victory of the season in France. In the second race, another Audi customer team, CSA Racing, scored a podium finish. Gaël Castelli/Alexandre Cougnaud, another Silver Driver pairing, improved to second overall after eighth place in qualifying, just 0.7 seconds behind the winners.

Ten places gained: The Road Shagger Racing team put in a remarkable performance on the fourth race weekend of the IMSA Michelin Pilot Challenge. Gavin Ernstone and Jon Morley started the two-hour race from 13th place in the TCR class at Mid-Ohio. At the beginning, they benefited from the scrum at the front of the field and were already seventh after one lap with their Audi RS 3 LMS. In the course of a total of 74 race laps, the two privateers improved to third position in their class. It was their first podium result this season.

Podium at Hockenheim: The Lestrup Racing Team celebrated a podium success in the 24H Series with the Audi RS 3 LMS gen II. In the fourth round of the season, the Hockenheim 12 Hours, a quartet of Swedish drivers managed third place. Andreas Bäckman/Marcus Fluch/Emil Sällberg/Oliver Söderström relegated their Lestrup teammates, who started in a VW Golf GTI, to fourth place.