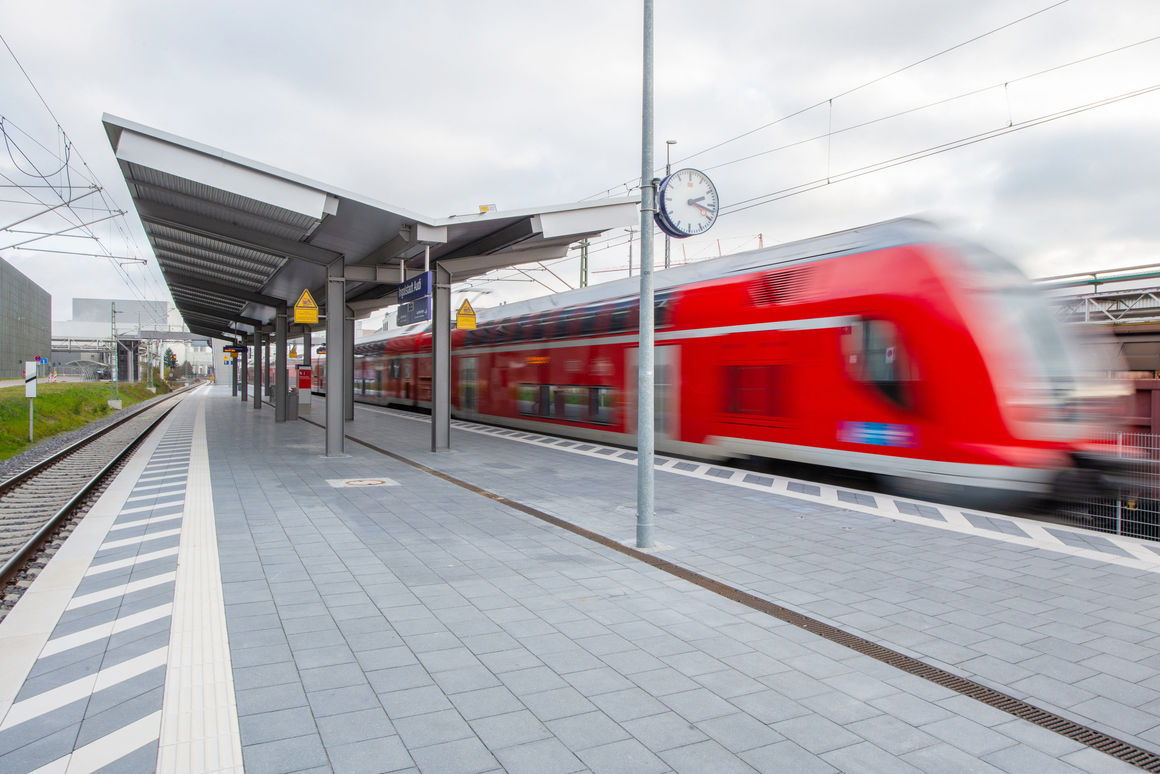 Better train connection for Audi plant and the north of Ingolstadt • The state of Bavaria, the city of Ingolstadt, Audi and DB invest €15 million together • Regional train is given the name “Ingolstadt Audi”

Getting directly to work quickly, conveniently and in an an environmentally friendly manner: With the “Ingolstadt Audi” train stop, there is now a third public train station in Ingolstadt. The new stop “Ingolstadt Audi” was opened today by Bavaria’s Minister President, Dr. Markus Söder, DB Member of the Management Board for Infrastructure, Ronald Pofalla, Hugo Gratza, Head of the Railway Department at the German Federal Ministry of Transport and Digital Infrastructure (BMVI), Ingolstadt’s Mayor, Dr. Christian Lösel, Peter Kössler, Member of the Board of Management for Production and Logistics at AUDI AG, and Peter Mosch, Chair of the General Works Council at AUDI AG.

Minister President Dr. Markus Söder: “Getting to work conveniently and in an environmentally friendly manner: An estimated 3,000 passengers will get in and out here every day. By working together, Deutsche Bahn, the state of Bavaria, the city of Ingolstadt and Audi have achieved a clear quality improvement for Audi employees with the new Ingolstadt Audi train stop. Bavaria is railway country. This is why we invested €145 million in the railway infrastructure in Bavaria last year.”

DB Member of the Management Board for Infrastructure, Ronald Pofalla: “The railway industry is booming in Bavaria. Together with the state of Bavaria and local politicians, we will continue to make investments. Twenty new train stations will be built in the coming years alone. For our customers, this means better connections to residential areas, business sites, universities, shopping centers, leisure and health facilities. The new stop in Ingolstadt is the 1,019th station in Bavaria. 378 million people use DB Regio Bayern’s trains every year. Ingolstadt Audi is a successful example of a genuine shared achievement. Audi, the city of Ingolstadt, the state of Bavaria, the German government and Deutsche Bahn have created a new train station with attractive connections here.”

Mayor Dr. Christian Lösel: “The new train stop is a milestone in public transport in the region and a clear acknowledgment of a sustainable transport policy. It is designed to offer an attractive facility for commuters from the surrounding areas, and this contributes to a clean improvement in the transport situation in the north of the city. With this new transport hub, we are connecting the railway network to inner-city traffic.

I am grateful for this unique cooperation. The train stop is an initial step; we now want to create a regional train on existing routes. This will make it necessary to expand Gaimersheim train station, and the possibility of a further stop at the foundry premises should also be investigated. ‘More trains, more regionality, more passengers’ should be our motto.”

AUDI AG Board Member for Production and Logistics Peter Kössler “Sustainable mobility affects all of us, business people, politicians and society as a whole. The Ingolstadt Audi train stop is an outstanding shared project and is truly unique in Germany. This train stop is more than just another stop. It is an intelligent transport hub for Audi employees and the region’s residents. Seamless and multimodal mobility of this type is the key to the intelligent transport of the future and is a logical complement, rather than a hindrance, to individual mobility.”

The state of Bavaria, the city of Ingolstadt, AUDI AG and Deutsche Bahn have invested €15 million in the new stop together. This station means that not only the Audi plant but also the Bavarian horticultural show will enjoy better connections to the rail network next year.

Construction of the new station started in April 2018. DB completed the work on time before next year’s horticultural show in Ingolstadt. The new train station offers direct, barrier-free access to AUDI AG’s plant premises as well as to the public transport network. The direct vicinity of the platform is home to what is known as the north transport hub, which connects the train station to the road and cycle path network. Also available here are eight bus platforms, 15 car parking spaces, 50 bicycle parking spaces as well as two taxi stands – these are freely usable for everyone. With the Ingolstadt Audi station, the third train station for Ingolstadt, regional local public transport will be strengthened in the long term and in an environmentally friendly manner, and burden on road traffic in the Ingolstadt area will be reduced considerably.

The name “Ingolstadt Audi” was also conferred on a modern DB regional train today well. Starting on December 15, this train will be one of 40 daily regional trains to stop at the new station.