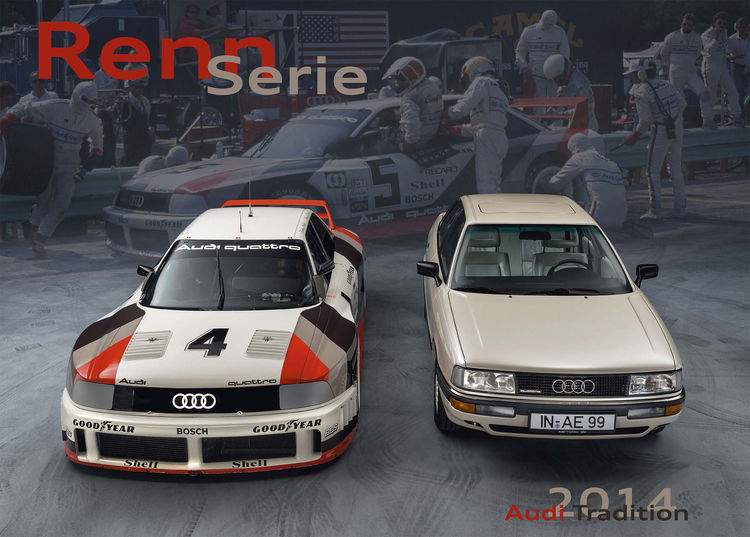 The new wall calendar from Audi Tradition has arrived. Under the theme of “RaceSeries”, it shows 27 automotive specimens from the history of AUDI AG. Automotive photographer Stefan Warter has created sophisticated studio setups pairing the race versions of these cars and motorcycles with their series-production counterparts. Contemporary graphic material sets the historical context of the photos. The layout and graphic design are by the artist Kristina Redeker.

Audi’s racing and rally models are usually based on a production car. This has always been the norm, and in many race series is often an explicit requirement. From an array of triumphant racing cars and motorcycles in the post-war years, Audi Tradition has selected some of the most notable examples along with their counterpart production models. It is clear at first glance that some of the pairings are closely related – the Audi V8 and Audi V8 DTM, for example. In other cases, the common ground is less self-evident – take for instance the picture for March, which places a DKW F94 alongside a Formula Junior. “It was an intriguing challenge to choose a perspective that highlights either the similarities or the differences,” explained Stefan Warter. “Some of the motifs evoke something of a Jekyll and Hyde atmosphere – such as the transformation of the respectable Audi 90 into an IMSA GTO.”

The “icing on the cake” for these photos is the background material: classic advertisements, photos or technical drawings that place the vehicles in their historical context. Take for instance the picture of a family from the late 1960s washing their NSU by hand – a rare sight these days, but one that speaks volumes about their great pride and special appreciation of their car.

On two pages, Audi Tradition steps away from the pairs concept: the picture for November shows two pairs each of DKW and NSU motorcycles from the 1950s. The picture for February features three vehicles against the background of a technical drawing showing the aspect that links them: the engine. And after the year has come to a close, there is one truly special highlight: a photo of all exhibits together.

“RaceSeries” is available from 29 November at the Audi museum mobile shop in Ingolstadt or online at www.audi.de/tradition-parts. The calendar costs EUR 29.90.