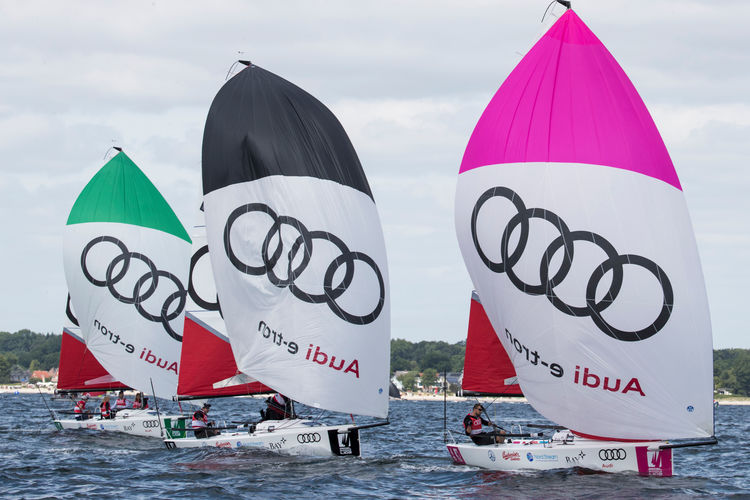 Audi is supporting the Kieler Woche Regatta as premium partner for the ninth year in a row. From 16 to 24 June 2018, the brand will be presenting a diverse programme of events on land and sea featuring a host of well-known guests. With 3.5 million visitors, over 4,000 athletes and 2,000 boats, Kieler Woche is the largest sailing regatta in the world.

The partnership between Audi and Kieler Woche underlines Audi’s wide-ranging and long-standing commitment to the world of competitive sailing. The “Audi Sailing Arena” at the Schilksee Olympic Centre will be the focal point for visitors again this year. As well as award ceremonies and interviews with the sailing crews, live footage of the individual regattas will also be shown here. In addition, it will provide space for Audi to present a few of its models – including the Audi A8 and the Audi Q7 e-tron. Audi will be providing 15 Audi Q7 e-tron vehicles as part of the trailer service it will lay on for all the sailing crews, while 10 Audi Q7 e-trons will be on hand to provide a shuttle service for guests.

As a meet-and-greet venue, the “Audi Boathouse” is sure to attract all the big names in the scene again in 2018. Meanwhile, Audi’s support for the broadcast provider “Kieler Woche.TV” will also continue this year, bringing sailing fans around the world closer to the action with live footage, expert analysis and GPS tracking. Cameras on shore, in the sky and on motorboats will capture every manoeuvre and duel on the water and transmit the footage to the production control room of “Kieler Woche.TV powered by Audi”.

Sailing is among the most sustainable of sports. This is something Audi really wants to get behind and so it has decided to place an even stronger focus on sustainability and environmental protection at this year’s Kieler Woche Regatta. It is organising a beach clean-up and will provide opportunities to try out some exciting electric products: Audi e-scooters and e-foil surfboards.

A host of famous names have again accepted Audi’s invitation to the Audi e-tron Cup 2018. An interesting mix of actors, presenters, sports stars and models will be competing against each other in teams to see who is the most skilful on the water. Some of the names who have already signed up for the regattas on the Kieler Förde inlet are Le Mans legend Tom Kristensen, Formula E racing driver Daniel Abt and the winter sports stars Bene Mayr and Hilde Gerg. The former national handball team member Pascal Henz and the Olympic hockey gold medallist Moritz Fürste have also confirmed that they will be taking part. The line-up for the Audi e-tron Cup will be completed by actress Nova Meierhenrich and the models Mirja Du Mont, Anna Hiltrop and Dany Michalski. All participants will be sailing in seven-metre-long J/70 boats.