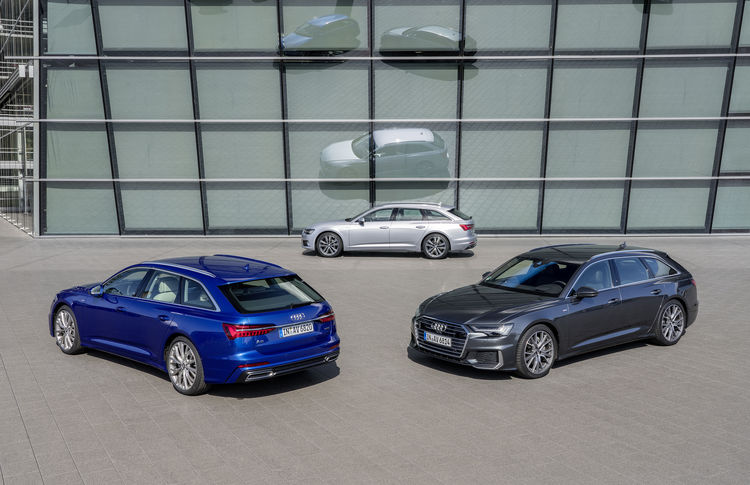 High variability and a dynamic, elegant design, supreme comfort and increased sportiness – the new Audi A6 Avant unites opposites. For improved efficiency, it combines various driver assistance systems with the powertrain management of the standard mild hybrid system. The suspension is both comfortable and sporty. The fully digital MMI touch response operating system is intuitive and allows for a high degree of personalization. Comprehensive connectivity provides for increased travel comfort.

Inviting – the spaciousness, the interior and the body

The new Audi A6 Avant measures 4.94 meters (16.2 ft) long, 1.89 meters (6.2 ft) wide and 1.47 meters (4.8 ft) high. Its interior is even more spacious than that of the predecessor model. It beats the competition with front and rear elbow room as well as with rear knee room. The folding rear seat is split three ways.

As with the predecessor model, luggage capacity is 565 liters (20.0 cu ft) in the base configuration, and that despite the sharply sloping D-pillar and rear window. This increases to 1,680 liters (59.3 cu ft) with the rear seats folded down. A power tailgate and power luggage compartment cover are standard; Audi offers a sensor controlled tailgate in combination with the convenience key. Other standard features include a system of rails with four lashing points integrated into the loading floor, a tensioning strap and two fastening hooks. The optional load-securing kit with telescopic bar and strap allow you to divide the luggage compartment to your exact requirements. The optional swiveling trailer towing hitch features an electric release function. Also available as an option is the camera-based trailer maneuver assist, which helps the driver when reversing and maneuvering with a trailer. The lower MMI touch display can be used to steer the trailer.

The new Audi A6 Avant is perfectly at home on long journeys, due in part to the low interior noise level. Aeroacoustics and aerodynamics are top-notch; the base model to follow later has a Cd value of 0.27. With its high rigidity, the steel and aluminum body lays the foundation for the high degree of acoustic comfort on board as well as for excellent handling. New optional comfort and convenience features such as the large panoramic glass sunroof, new seats or the optional air quality package with two different scents and ionizer make the A6 Avant an ideal touring car.

Dynamic and elegant – the exterior design

Attractive station wagons go by the name of Avant. The new A6 Avant underscores this Audi claim by combining high everyday utility with dynamic design. It is the first Avant model in the new Audi design language, which is characterized by large, athletically taut surfaces, sharp lines and short overhangs.

A wide, low Singleframe grille dominates the front of the new A6 Avant. A distinctive silhouette with a stretched front end and trapezoid window surfaces characterize the side view. Brawny blisters over the wheel arches emphasize the quattro drive. The sinewy roof line flows into a roof edge spoiler, which makes the side view appear even longer. The Avant’s D-pillars and rear window are particularly sloping, which reinforces the dynamic appearance. An aluminum trim strip joins the two rear lights and visually underscores the width of the car. As alternatives to the series version, customers can choose the sport and design trim lines as well as the S line exterior package.

See and be seen – the lighting design

The elegant, puristic architecture in the interior of the new Audi A6 Avant harmonizes perfectly with the operating concept. Dominating the slender instrument panel is a black, glass-like surface into which the upper MMI touch response display is integrated. This display is tilted toward the driver. The emphatically horizontal body line in the interior underscores the impression of generous space. In the dark, the optional contour ambient lighting package highlights this spaciousness.

Audi offers a choice of four trim lines in addition to the base version: sport, design, design selection and S line sport package, each of which has its own color concept. The shades are progressive and elegant; the materials are sophisticated and includes such things as Valcona leather and trim panels in open-pore wood. The S line exterior package can be combined with any of the trim lines.

With frequent drivers and commuters in mind, the A6 Avant provides an extensive range of driver assistance systems. These use refined control mechanisms to enhance convenience and provide additional support for drivers’ tasks. Besides the standard “Audi pre sense front” emergency braking assist, customers can choose a total of 39 assistants in two different packages. The individual systems are bundled into the packages City and Tour.

The Tour package includes the adaptive cruise assist with narrowed road assist. It conveniently handles longitudinal and lateral guidance in stop-and-go traffic right down to a standstill and over the entire speed range, and also supports the driver by accelerating and braking to maintain the set speed or distance to the vehicle ahead.

The supplemental efficiency assist function enables the adaptive cruise assist to predictively adjust speed to speed limits, curves and roundabouts. If route guidance is active, it can even adjust speed for turns. The driver sees the target speed on the display. In doing so, the system always adapts the driving style to the selected driving program, from efficient to sporty.

Another highlight is the emergency assist, which provides for greater safety. It detects when the driver is inactive and provides a visual, acoustic or haptic warning depending on the hazard. If this does not prompt a reaction, the system takes control of the A6 Avant and automatically stops it in its own lane with the hazard warning lights on. This also activates pre sense safety measures and, depending on the country, triggers an automatic emergency call.

With the City package, five systems assist the driver: The crossing assist warns of critical cross-traffic in front of the car, and Audi pre sense 360° warns of vehicles approaching from the side. The rear cross traffic assist detects approaching vehicles when slowly driving backwards, for example when pulling out of a parking spot perpendicular to the road. Exit warning and lane change warning supplement the package. Additional systems, such as the trailer maneuver assist, are available separately.

All of these systems are managed by the central driver assistance controller (zFAS). It continuously generates a differentiated model of the car’s surroundings. Depending on the equipment level, it uses data from as many as five radar sensors, six cameras, twelve ultrasonic sensors and a laser scanner.

Attentive and accommodating – the infotainment

The standard infotainment system in the new Audi A6 Avant is MMI navigation, which can be upgraded to the top system, MMI navigation plus. Its data transfer module supports the LTE Advanced standard and incorporates a Wi-Fi hotspot. The self-learning navigation system recognizes the driver’s preferences based on previous journeys and uses this information to make intelligent suggestions as a destination is being entered. The route is calculated online on the servers of service provider HERE and also in the car.

The Audi connect portfolio offers numerous online services, including several Car-to-X services. With the optional Audi connect key, customers can lock and unlock their new A6 Avant via an Android smartphone. The myAudi app connects the car with the owner’s smartphone. The Audi phone box enables telephony via the Voice-over-LTE protocol. The Bang & Olufsen Advanced Sound System uses a total of 19 speakers to deliver fascinating 3D sound, including in the rear.

All engines in the new A6 Avant come with Audi’s new mild hybrid technology (MHEV). In real-world driving, this can reduce fuel consumption by up to 0.7 liters per 100 kilometers. With the V6 engines, it operates with 48 V, while the four-cylinder engines use a 12 V electrical system. The belt alternator starter, the heart of the MHEV system, recovers up to 12 kW with the 48 V system during braking and feeds the electricity into a separate lithium-ion battery. At speeds between 55 and 160 km/h (34.2 and 99.4 mph), the A6 Avant models can coast with the combustion engine deactivated. The start-stop range begins at 22 km/h (13.7 mph), 15 km/h (9.3 mph) with the 150 kW, four-cylinder diesel engine.

In the MMI touch response operating concept of the new Audi A6 Avant, the driver controls nearly all functions on two large displays. The driver manages infotainment and navigation on the upper, 10.1-inch display (when equipped with MMI navigation plus). The 8.6-inch display below that is used to for climate control, comfort and convenience functions and text input, during which the driver can rest their wrist on the gear selector lever.

With its haptic and acoustic feedback, the MMI touch response technology is fast and safe. Operation is via touch and swipe gestures, just like with a smartphone. The menu structure is logical and flat. Direct access buttons for various functions on the upper screen and shortcuts on the lower screen allow the user to personalize the arrangement of many icons.

MMI navigation plus also includes the fully digital Audi virtual cockpit, which has a 12.3-inch screen and is operated with the multifunction buttons on the steering wheel. A head-up display is optionally available. The standard natural language voice control turns the new A6 Avant into a dialogue partner. It uses both onboard data as well as information from the cloud to respond to commands and questions. Individual profiles for up to six users plus a guest profile can be used to store roughly 400 preferred settings for a number of vehicle functions and features.

Compared with the previous model, the suspension of the new A6 Avant offers an even wider spread between dynamics and comfort. The standard progressive steering, which is already direct, works with greater return forces as steering angle increases for a sporty driving feel. Its new control concept provides intense road feedback without transferring unpleasant jolts to the steering wheel.

Audi offers dynamic-all-wheel steering as an option. It combines maneuverability, agility and stability in a whole new way. At speeds up to 60 km/h (37.3 mph), the rear wheels turn as much as five degrees in the opposite direction to the front wheels. Rear-axle steering thus reduces the Avant’s turning circle by as much as one meter (3.3 ft) to 11.1 meters (36.4 ft). This makes the A6 Avant much more agile on winding country roads. At higher speeds, the front and rear wheels turn in the same direction. This improves both straight-line tracking and stability when changing lanes.

Audi offers a choice of four suspension variants in the new A6 Avant: the standard steel-spring suspension, the sport suspension, the suspension with damper control and the adaptive air suspension, also with controlled dampers. In addition to the dampers and the air springs, the electronic chassis platform (ECP) also manages the dynamic all-wheel steering and the sport differential, which actively distributes the drive torque as needed between the rear wheels during fast cornering.

The driver can adjust the settings for all controlled suspensions in the Audi drive select dynamic handling system – in the modes efficient, auto, comfort and dynamic. The dynamic all-wheel steering varies its ratio and the degree of feedback, for example. The new Audi A6 Avant stands on wheels measuring up to 21 inches, which boast exceptional ride and noise comfort even at this size.

The two V6 TDI units forward their power to an eight-speed tiptronic; the 2.0 TDI to a seven-speed S tronic. quattro all-wheel drive is standard equipment with the V6 engines. Variants with tiptronic feature a self-locking center differential. In combination with the S tronic, the quattro ultra technology instantly connects the rear wheel drive when necessary. The optional sport differential is the ideal supplement to the V6 TDI units. During sporty cornering, it actively distributes the torque between the rear wheels.