Open-top driving machine with over 300 hp 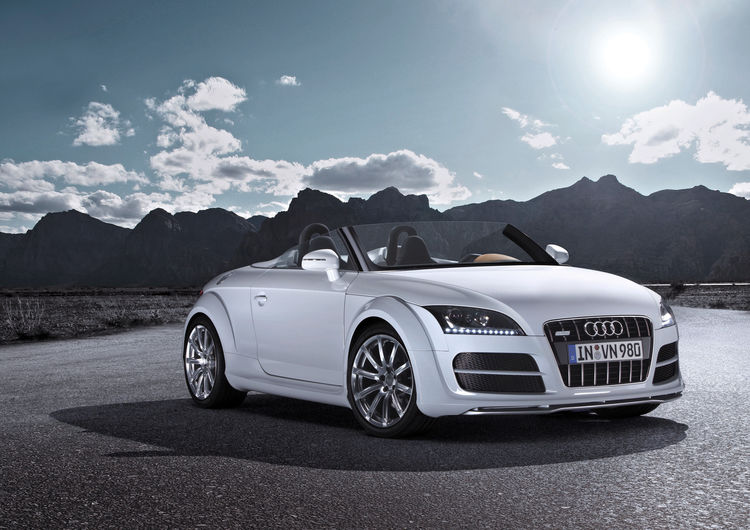 An open cockpit, an engine producing more than 220 kW (300 hp) and a host of technologies borrowed from the world of motorsports – the Audi TT clubsport quattro is an uncompromising driving machine. Audi is presenting an updated version of the spectacular showcar and sensation of 2007 at the Wörthersee Tour, the big meet for Audi and VW enthusiasts in Reifnitz (Kärnten), Austria, from May 21 to 25.

Purism at a premium level – this was the goal that the designers and engineers set themselves for the Audi TT clubsport quattro. The low windshield is extremely flat. The A-pillars are nearly invisible, making the continuous window strip appear to be a single casting. Instead of the compartment for the soft top there are two humps behind the passenger compartment – the lines of the showcar painted in Suzuka Gray, pearl effect are intensely evocative of a speedster. Mounted in front of the humps are two massive rollover bars, which together with the strong A-pillars protect the driver and passenger if the car should roll over.

The front end is dominated by the powerful single-frame grill painted in high-gloss black. Beneath the headlamps, which feature a strip of LED daytime running lights, are large air inlets covered by horizontally split black grills.

A distinctive spoiler lip optimizes downforce. When viewed from the side, the sharp contours in the sill area are every bit as striking as the boldly accentuated wheel wells, which house impressive (polished) 9x19 inch wheels shod with 255/35 tires. The track was widened by 66 millimeters (2.60 inches) versus the production TT. The rear bumper is designed as a diffuser. The fascia between the two large tailpipes of the stainless steel exhaust system emphasizes the horizontal lines and makes the car look even wider from behind.

The purist style of the exterior carries over to the interior of the Audi TT clubsport quattro. The newly designed sill area emphasizes the width of the vehicle. The driver and passenger sit in racing bucket seats that offer excellent support even in extreme driving situations – on the race track, for example.

Typical Audi: aluminum in the interior

Typical for Audi is the generous use of aluminum in the interior of the showcar. The clubsport quattro sports a high-grip version of the flat-bottomed steering wheel from the production TT with aluminum shift paddles. The door pull handle and door opener are also made of aluminum, and their cut-out appearance emphasizes the lightweight design character of the concept car. The pedals also shine with aluminum.

The second distinctive feature of the interior of the TT clubsport quattro is the color orange. Leather in this color provides bright highlights to the arm rests, the sides of the center tunnel, the backs of the bucket seats and the instrument cowl. The orange and white graphics of the instrument cluster clearly distinguishes it from its counterpart in the production model.

The TT clubsport quattro is a true sports car, and technology borrowed directly from the world of motorsports emphasizes this character. Even more power has been coaxed out of the 2.0 TFSI engine – the turbocharged four-cylinder gasoline engine breaks the magic 300 hp barrier. The exhaust system was designed to be particularly easy-breathing, and a powerful racing sound exudes from the oval tailpipes.

The two-liter engine delivers its full power to an S tronic transmission. Thanks to its dual clutch, gear changes occur extremely quickly without interrupting the flow of power and thus go virtually unnoticed. The driver can change gears manually using the shift lever or the paddles on the steering wheel, or can choose a fully automatic mode. The quattro permanent all-wheel drive system transfers the power to all four wheels.

The powerful brake system from the new Audi TTS provides the stopping power. Its ventilated discs measure 340 millimeters (13.39 inches) up front and 310 millimeters (12.20 inches) at the rear.

The Audi TT clubsport quattro is a purist driving machine combining the performance of a sports car with the unique design language of Audi. Small-series production of this model cannot be ruled out.

AUDI AG sold a total of 964,151 cars in 2007 and thus achieved its twelfth consecutive record year. With revenue of €33,617 million and profit before tax of €2,915 million, the company attained its best figures ever. Audi produces vehicles in Ingolstadt and Neckarsulm (Germany), Györ (Hungary), Changchun (China) and Brussels (Belgium). At the end of 2007, production of the Audi A6 started in Aurangabad, India. The company is active in more than 100 markets worldwide. AUDI AG’s wholly owned subsidiaries include Lamborghini S.p.A. in Sant’Agata Bolognese, Italy, and quattro GmbH in Neckarsulm. Audi employs more than 54,000 people worldwide, including 45,000 in Germany. The brand with the four rings invests more than € 2 billion each year in order to sustain the company’s technological lead embodied in its “Vorsprung durch Technik” slogan. Audi plans to significantly increase the number of models in its portfolio by 2015, from the 26 currently on offer to 40.