On the road internationally with Audi Tradition 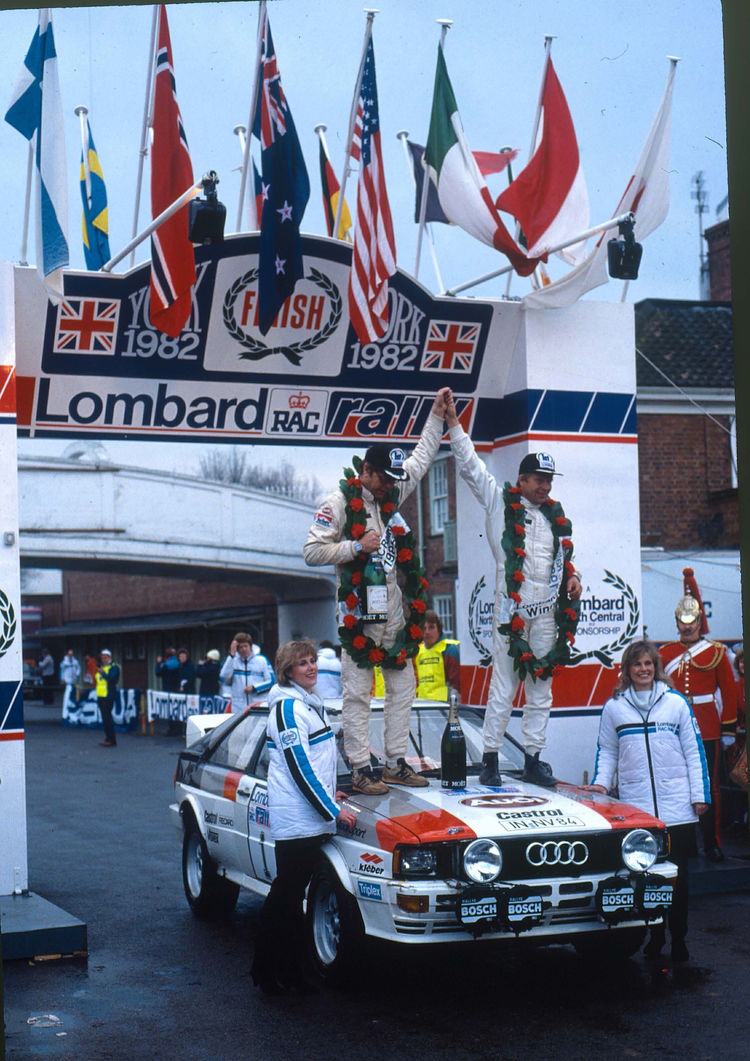 Hannu Mikkola was fastest in the 1981 and 1982 Lombard RAC Rallies. In 1983 he went on to take the driver’s world championship title.
Download PDF (196 KB)
Facebook
Twitter
LinkedIn
WhatsApp

A green light for the start of the event season: in 2013 Audi Tradition will be present at more than 30 international events, including several anniversaries. At the Goodwood Festival of Speed, for example, Hannu Mikkola will take the wheel of an original Audi Rally quattro. In 1983, thirty years previously, he was the first driver to win the world rally championship in an Audi. 75 years have elapsed since Ewald Kluge became the first German winner of the world’s most difficult, hazardous motorcycle race, the Tourist Trophy (TT) on the Isle of Man on a 250 cc DKW. Audi Tradition will therefore be participating for the first time in the Classic TT held in August, which attracts motorcycle enthusiasts from all over the world to the island in the Irish Sea.

The first event in this year’s programme is the Techno Classica vintage and classic car show in Essen (April 10 to 14). The motto of the Audi stand in Hall 7 is “80 years of the V8 under the sign of the four-rings – engines, models, motor sport”. In 1933 Auto Union developed a new V8 engine and exhibited it at the Berlin Motor Show in a Horch 830. 25 years ago the Audi V8 was introduced at the Paris Salon de l’Automobile – a new model with a light alloy eight-cylinder engine and many innovative details; it marked Audi’s entry into the premium segment of the car market. Seven Horch and Audi cars will be awaiting the visitors.

The world’s largest historic motor sport event takes place from July 12 to 14 in England. This is the twentieth occasion on which the Lord March has invited visitors to Goodwood for the Festival of Speed – and 185,000 are expected to attend on this weekend. In this long-established setting Audi Tradition is commemorating the driver’s world rally championship captured in 1983 by Hannu Mikkola. He will himself be seen at the wheel of a recently restored Audi Rallye quattro that was entered for the British Lombard RAC (Royal Automobile Club) Rally in the year that he took the title. Visitors will also see other legendary cars that will add further excitement to this Festival: the Audi 200 quattro TransAm, with which Audi took the manufacturer’s and driver’s title in this North American series 25 years ago, and the Auto Union Type C racing car dating from 1936, with twin rear tyres ready for the hillclimb.

On August 25 and 26, when entrants are flagged away in the Classic TT on the Isle of Man, Audi Tradition will have a motorcycle at the starting line for the first time. This commemorates Ewald Kluge’s legendary victory 75 years ago: on his 250 cc rotary-valve DKW he was the first German rider to win this event, the toughest motorcycle race in the world. He took the chequered flag no fewer than 11.10 minutes ahead of his nearest rival. As a tribute to Ewald Kluge, Ralph Waldmann, himself twice runner-up in the world motorcycle racing championship, will ride a DKW SS 250 (1938) in the 2013 event.

Other classics in the Audi Tradition event programme are the Donau Classic (June 20 to 22) with Ingolstadt as its centre, and the Heidelberg Historic (July 11 to 13), which calls in at the Audi Forum Neckarsulm on the Saturday. Then there is the 40th International Auto Union Veterans’ Meeting from August 2 to 4 in Ingolstadt, which the organisers expect four hundred Audi, DKW, Horch and Wanderer cars to attend.

The Ingolstadt-based Audi Tradition team will be taking part for the first time in the Eifel Rally Festival from July 25 to 27. Entries have already been received from twelve countries all over the world. Harald Demuth, twice German rally champion, will drive an Audi Sport quattro Rallye built in 1984. Another example of Audi’s extremely successful rallying activity in the 1980s has a leading role to play in the International Rossfeld Berchtesgaden Edelweiss Hillclimb (September 27 to 29): the Audi S1 Pikes Peak, driven by Walter Röhrl, who was twice world rally champion.

Audi is sponsor of the Youngtimer Classic for the first time on July 20, and will be entering four classic cars. Cars from Ingolstadt will also be showing the flag at the Bodensee Klassik (May 2 to 4), the Sachsen Classic (August 22 to 24), the Kitzbühel Alpine Rally (June 5 to 8) and the Schloss Bensberg Klassik (September 6 to 8), of which a special highlight is the Concours d’Elégance. Another firm date in the calendar is the Gran Premio Nuvolari (September 20 to 22) in Italy.

To conclude the season, the highly popular model car markets will be held in the Audi Forums in Neckarsulm (November 3) and Ingolstadt (December 1).