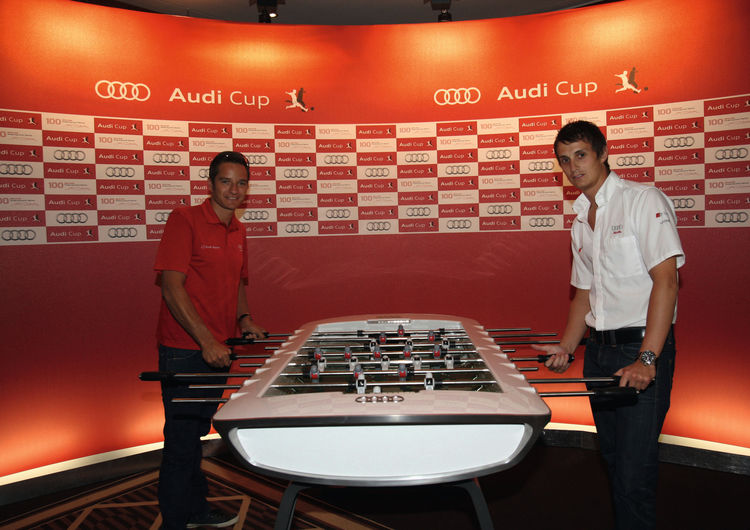 The DTM visits Oschersleben in the “Magdeburger Börde” flatlands this weekend (Saturday from 1:25 pm and Sunday from 1:45 pm – local time – live on “Das Erste”). Oliver Jarvis (25), who surprised at Zandvoort, will congratulate the winner of the Audi Cup during the event.

Oliver Jarvis’ Audi A4 DTM will start with slightly modified graphics at Oschersleben. The young Briton, who at the last round at Zandvoort was the first driver in the history of the new DTM to clinch the pole position in a year-old car, was advertising the Audi Cup at the first four races of the 2009 season. Now, at Oschersleben, Jarvis – with updated graphics on his A4 DTM – congratulates the winner of the soccer tournament which has been organized by Audi for the first time. At the finale on Thursday night, FC Bayern München defeated Manchester United at the sold-out Allianz Arena in Munich with a score of 7:6 after a penalty shoot-out.

Some of Audi’s DTM stars, as well, would not miss the Audi Cup: Oliver Jarvis, Katherine Legge, Tom Kristensen, Timo Scheider, Martin Tomczyk and Markus Winkelhock have all been spotted at the Allianz Arena.

As many as three members of AUDI AG’s executive board will watch the DTM race at Oschersleben on location. Rupert Stadler, Chairman of the Executive Board, Ulf Berkenhagen, who is responsible for Purchasing, and Michael Dick, Executive Board Member for Technical Development, have announced their attendance.

Audi now offers DTM fans two new services free of charge: The Audi DTM text message service transmits current results after qualifying and races to cell/mobile phones. Users can register for this service at www.audi.de on the Internet. Visitors at the venue can also look forward to a new trackside service: At the Audi “Fantreff” and at the Audi VIP Lounge they can download attractive applications on their cell/mobile phone via Bluetooth – from the engine sound of the Audi A4 DTM and video clips all the way to product information.

Racing action at Oschersleben is not only featured on the track but also at the Audi Team and Media Hospitality: On Saturday night after the traditional media get-together the Audi DTM Challenge will take place from 7:30 pm. At a slot car race “slot car pros” of the rallye racing Carrera Cup from Hamburg will meet DTM stars Mattias Ekström, Alexandre Prémat and Mike Rockenfeller, Porsche driver Jeroen Bleekemolen as well as Volkswagen Junior René Rast. A total of 30 contenders with self-made 1:24 scale slot cars are expected to compete.

As part of the Audi Drive Aways 25 vehicles of the A5 Coupé, A4 Sedan and Avant as well as TTRS model ranges will go out on the track in a parade on Saturday, and 26 on Sunday. At Oschersleben, the vehicles will be handed over to dealers by Sales Germany.