Norisring race under theme of 100 years of Audi 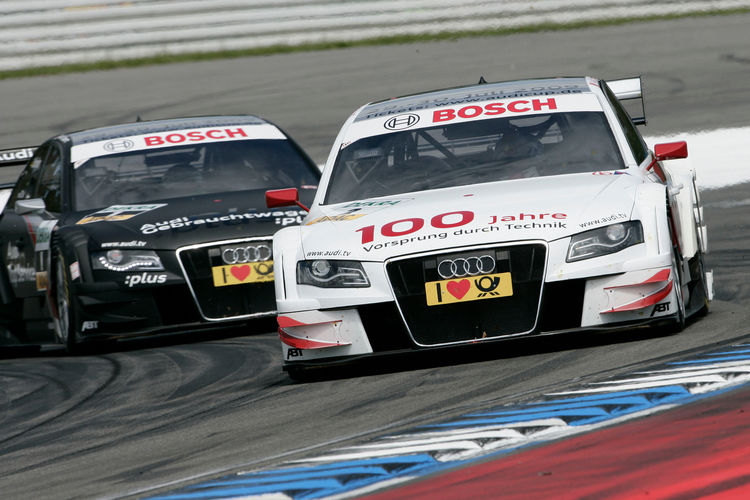 The appearance of Audi during the DTM race at the Norisring is under the theme of the Audi brand’s 100th anniversary. To mark the “Audi home race” in Nuremberg more than 100,000 visitors and many celebrity guests are expected – this and other interesting facts from the Audi camp before the most popular international race series’ season highlight.

As already seen at the first two races of the 2009 season, Tom Kristensen once again advertises for the Audi brand’s 100th anniversary on his Audi A4 DTM at the Norisring.

The Audi Drive Away – this weekend a cooperation between Sales & Marketing Germany and the Nuremberg based Feser Group – supports the festivities surrounding “100 Years Audi”: The parade consisting of thirty Audi A3 and A5 cabriolets, which takes to the track on Sunday shortly before the DTM race at 1:05 p.m., is led by a Audi Front UW Cabriolet from the year 1934.

An exhibition on the subject “100 Years Audi” is offered to Audi Lounge guests. Rarities to be admired include a Horch 830 BL Pullmann Limousine from 1938. Edgar Friedrich, August Horch’s last apprentice, is guest in the Audi Lounge on Sunday.

In contrast to the historic Horch, the technically innovative Audi R15 TDI is on show with which Dindo Capello, Tom Kristensen and Allan McNish clinched third position in the 24 Hours of Le Mans a fortnight ago. The first diesel racing sportscar of the second generation is displayed in front of the Audi Lounge. Le Mans record winner Tom Kristensen will answer questions about the subject “Le Mans” between 5:00 and 5:20 p.m. at the Audi Fantreff on Saturday.

Loona will give a short performance exclusively for guests in the Audi Lounge on Sunday, Peter Fill aims to surprise the Audi team with lucky charms in the form of ski helmets for the 2009/2010 winter season.

On Friday the Feser Group invites customers to a now traditional evening event in the Audi Lounge. Among the guests are Audi drivers Mattias Ekström, Mike Rockenfeller and Timo Scheider.

A high profile visit is expected at the weekend in the Audi Team & Media Hospitality picturesquely situated on the Dutzendteich lake: Twelve chief editors representing various important German media receive, at the invitation of Audi, an exclusive look behind the scenes of the DTM.

The Executive Board of AUDI AG is also well represented at the Norisring. Expected are Rupert Stadler, Chairman of the Board of Management, and Michael Dick who, as Board Member for Technical Development, is also responsible for the Audi motorsport involvement, Peter Schwarzenbauer (Marketing and Sales ) and Dr. Werner Widuckel (Human Resources).

In addition to the current Audi R8 safety car equipped with a V8 power unit the stewards at the Norisring will also have, for the first time, the powerful 520 hp Audi R8 V10 as pace car.