New engine and an even sharper look: Update for the Audi RS 3 Sportback 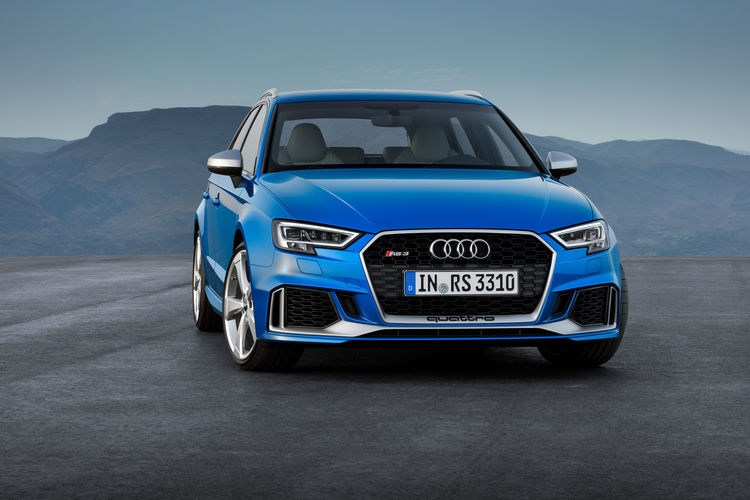 The new Audi RS 3 Sportback* completes the Ingolstadt premium automaker’s sporty vanguard in the compact segment. Following the world premiere of the RS 3 Sedan* at the 2016 Paris Motor Show, the RS 3 Sportback now stands poised to make its entry at the Geneva International Motor Show. With the most powerful production five-cylinder in the world, outstanding dynamism and an even sharper look, the car offers an emotional driving experience.

“The Audi RS 3 Sportback offers our customers an attractive introduction to the RS world,” said Stephan Winkelmann, CEO of Audi Sport GmbH. “Since 2011 the sporty compact model has proved itself extremely successful on the market. And with the new five-cylinder engine, the Audi RS 3 Sportback is at the head of its class and continuing that strong track record.”

From 0 to 100 km/h (62.1 mph) in 4.1 seconds
Behind the impressive performance of the Audi RS 3 Sportback is the world’s most powerful production five-cylinder engine – the 2.5 TFSI. It delivers 294 kW (400 hp) of output – 33 hp more than the predecessor engine – and is 26 kilograms (57.3 lb) lighter thanks to its aluminum crankcase, among other features. Its maximum torque of 480 Nm (354.0 lb-ft) is available at engine speeds as low as 1,700 rpm and remains constant up to 5,850 rpm. That’s how the RS 3 Sportback is able to sprint from 0 to 100 km/h (62.1 mph) in 4.1 seconds. The effect of this extraordinary tractive power is intensified by the five-cylinder’s unmistakable sound, which comes from having the ignition alternate between directly adjacent cylinders and widely spaced ones. On request, Audi will increase the electronically limited top speed from 250 km/h (155.3 mph) to 280 km/h (174.0 mph).

For better mixture preparation, the new 2.5 TFSI engine employs dual injection into the intake manifold and into the combustion chambers. On the exhaust side, the Audi valvelift system controls the duration of valve opening depending on the throttle and engine speed – for moderate fuel consumption at low and partial load as well as more spontaneous throttle response and a high level of tractive power at full load. In the New European Driving Cycle (NEDC) the RS 3 Sportback uses 8.3 liters of fuel per 100 kilometers (28.3 US mpg), which equates to 189 grams of CO2 per kilometer (304.2 g/mi).

quattro drive with variable distribution of power
The S tronic seven-speed dual-clutch transmission and quattro permanent all-wheel drive transfers the power of the five cylinders to the road. And the electro-hydraulic multi-plate clutch distributes the drive torque variably between the axles. The sportier the driving, the faster and more often a large share of the torque reaches the rear axle. quattro management is integrated as a standard feature in the dynamic handling system Audi drive select, as are the steering,

S tronic, the engine management, the adjustable exhaust flaps, and the optional RS sport suspension with adaptive damper control. The driver can individually vary the operation of these components between three modes – comfort, auto and dynamic. Handling is perfected using the Electronic Stabilization Control (ESC) with wheel-selective torque control and the sport mode specially tuned for the RS.

Wider track and sporty suspension setup
Together with progressive steering, the four-link rear axle, and the tight suspension setup lowered by 25 millimeters (1.0 in) relative to the A3, the RS 3 Sportback combines fascinating dynamism with superior stability. Compared to that production model, the track at the front axle of the RS 3 Sportback is wider by 20 millimeters (0.8 in) – and the wheel arches are accordingly flared wider. As standard, Audi includes 19-inch cast wheels and 235/35 tires, and brake disks with a diameter of 310 millimeters (12.2 in). Alternatively, customers will be able to choose carbon-fiber ceramic disks in front. At the rear axle, brake disks with a diameter of 310 millimeters (12.2 in) are used.

Distinctive RS design
On the exterior, the RS 3 Sportback shows off its power in the form of a striking Singleframe with a gloss black honeycomb grille, large air inlets and angular sill trims. The redesigned blade in the bumper gives the front end an even wider look. At its ends it forms narrow, upright funnels. LED headlights with their distinctive lighting signature are standard, and Audi offers matrix LED headlights as an option. In the rear a stylish RS roof edge spoiler, a diffuser insert and the RS exhaust system’s large oval tailpipes are sure to turn heads everywhere. A quattro logo at the bottom of the Singleframe is a finishing touch to the dynamic appearance, as are the RS 3 emblem on the honeycomb grille and on the tailgate.

Lap timer, boost pressure indicator and special RS screen
The two circular instrument dials are black with red needles and white scales. The centrally positioned driver information system includes a boost pressure indicator, an oil thermometer and a lap timer. The fully digital Audi virtual cockpit displays the infotainment system data and is available as an option. A special RS screen shifts the tachometer to the center, displaying on either side the readings for torque, g‑forces and tire pressure. When the transmission is operating in manual mode, a scale with a color background prompts the driver to use the steering wheel paddle or selector lever to upshift when approaching maximum rpm.

Sporty interior and outstanding comfort
The RS 3 Sportback is equipped with sport seats in black fine Nappa leather as standard. RS sport seats with more contoured profiles and integrated head restraints for the driver and front passenger are available as options. RS emblems are emblazoned on the seatbacks of both seating variants. The RS sport leather steering wheel is flat-bottomed and features buttons for operating the infotainment system. The main control element is the rotary/push-button control on the console of the center tunnel. A touchpad can be integrated in its surface as an option, enabling the driver to scroll, zoom and enter text. Also included is a free text search feature that automatically completes the user’s input after just a few letters have been entered. The voice control can process user questions and commands formulated in everyday language.

Online with Audi connect
When it comes to infotainment, the RS 3 Sportback is extremely versatile. An LTE module brings the Audi connect services on board, including navigation with Google Earth and Google Street View, as well as information on fuel prices, weather, travel and traffic. The Audi MMI connect app lets users transfer their smartphone calendars into the MMI system. Drivers can also send destinations from Google Maps and special destinations to the navigation system, and also stream music from the internet. Apple Car Play and Android Auto can be used to immediately bring selected apps to the onboard screen, for telephone, navigation and music needs. In addition, the navigation system includes a Wi-Fi hotspot that enables passengers to connect their mobile devices to the internet.

Other highlights include the Audi phone box, the Bang & Olufsen Sound System with 705 watts of power, and many driver assistance systems. In slow-moving traffic up to 65 km/h (40.4 mph), for example, the traffic jam assist keeps the car at a safe distance from the vehicle in front and can briefly take over the steering. Also new in the Audi RS 3 Sportback are the emergency assist, which automatically stops the car if required, and cross traffic assist rear. The latter system looks out for crossing vehicles when the driver is pulling out of a parking space.

** Figures depend on the tire/wheel sets used