Skip to content
Please participate in our survey and help us improve the Audi MediaCenter. Thank you!
Go to survey
06/14/14
Ingolstadt
Motorsport

Discover the power of imagination with Audi and Andrés Reisinger. #AudiAndresReisinger #DesignMiami *The vehicle shown is a concept vehicle that is not available as a production vehicle
YouTube 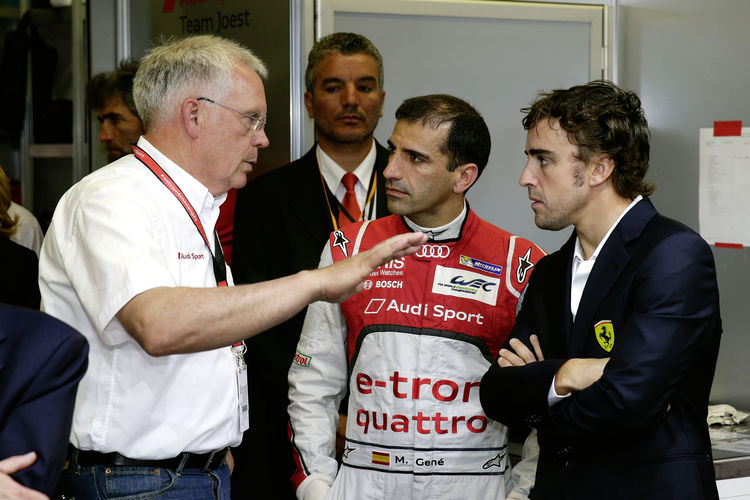 The 82nd running of the Le Mans 24 Hours attracted more than 250,000 spectators and numerous prominent guests. For a whole week, the Audi drivers were very busy off track as well.

The two-time Formula World Champion Fernando Alonso was the honorary starter of the 82nd running of the Le Mans 24 Hours. The Spaniard is a great Le Mans fan and in the early stage of the race, together with FIA President Jean Todt, also visited the garage of Audi Sport Team Joest where he wished his compatriot Marc Gené lots of racing luck.

Two former motor sportsmen visited Audi as well. The Briton Richard Attwood, winner of the 1970 Le Mans 24 Hours, and Hannu Mikkola. The Finn in 1983, together with co-driver Arne Hertz, decided the World Rally Championship in his favor in the Audi quattro. Audi’s first World Champion also met with a current World Champion of the brand, the Scotsman Allan McNish. The two Audi DTM Team Directors Hans-Jürgen Abt and Ernst Moser kept their fingers crossed for Audi’s sports car squad at Le Mans too.

At the French circuit, on the eve of the Le Mans 24 Hours, Audi presented the Audi R8 LMX, the brand’s first production model with laser high-beam light. The two Le Mans winners Dindo Capello and Marco Werner presented the mid-engine sports car, which is equipped with similar light technology as the current Audi R18 e-tron quattro.

Loïc Duval, following his serious accident in free practice, has returned to Switzerland. His fellow drivers sent their best wishes to the Frenchman. During the autograph session and on the starting grid they held a large banner saying “Loïc, get well soon!” in front of the cameras.

Allan McNish experienced a race week that was almost more intensive for him than in his active racing days. The World Endurance Champion assisted Audi Sport Team Joest and Audi drivers with active support and advice, as last year’s winner was present at the hand-printing ceremony downtown, acted as moderator of the Audi press conference on Friday and assumed numerous other responsibilities. The Le Mans race organizer had also appointed the Scotsman as Grand Marshal for the 82nd running of the 24-hour race. In addition, McNish was inducted into the Le Mans Hall of Fame.

Audi tire partner Michelin honored Loïc Duval, Tom Kristensen and Allan McNish with a very special gift. The 2013 Le Mans winners each received a Ducati Monster 1200 for their triumph in the Audi R18 e-tron quattro. It is regarded as one of the most legendary motorcycles made by the Italian Audi subsidiary. The French tire specialist handed over the 135-hp Ducati bikes to the fortunate drivers on Tuesday of the Le Mans race week.

Le Mans rookie Filipe Albuquerque was delighted to be able to hold a large plaque in front of the cameras during the drivers’ parade on his 29th birthday. The Portuguese, together with his team-mates Marco Bonanomi and Oliver Jarvis had qualified for grid position five in the best Audi. As a result, he became ‘Rookie of the Year’ – a small consolation for the fact that the Portuguese was not able to drive in the race following the accident of Marco Bonanomi in which Bonanomi was not at fault.

Tom Kristensen paid what has become a traditional visit to thousands of fans from Denmark on Friday. ‘Mister Le Mans’ visited various camps and extended a welcome on stage in the largest fan tent. Dindo Capello, Marc Gené and Lucas di Grassi accompanied Kristensen into the fan tent and distributed gifts to their enthusiastic followers.

For Filipe Albuquerque and Marco Bonanomi, it was an honor to visit the Audi Sport Camp on Friday. Several hundred employees of Audi and suppliers use the opportunity every year to travel to Le Mans, camp out in the track compound and to cheer on their brand.

Before the Le Mans 24 Hours, Audi driver Loïc Duval met with the former French national soccer player Fabien Barthez. The French sports paper l’Équipe had invited them to the meeting. At the trackside MM Arena, the two athletes battled with each other for ball possession in front of the cameras. Barthez – one of only four goalkeepers ever to have become a World and European Champion – has been a race driver since 2008, was French GT Champion last year and is contesting the Le Mans 24 Hours for the first time this year.