Making of RS: How Audi Sport GmbH shapes the character of its RS models 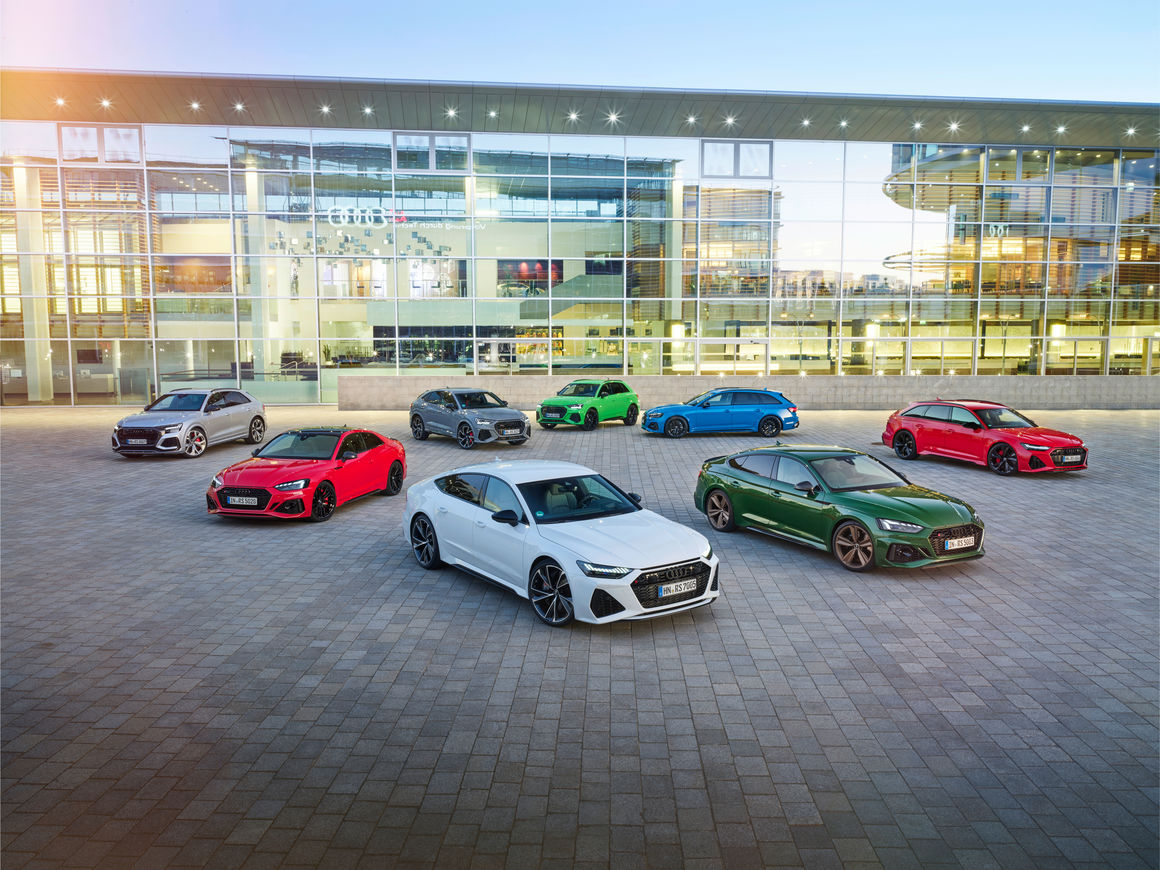 The RS models from Audi Sport GmbH are the dynamic spearheads of their respective product lines. They have a strong character that consists of distinct design differentiation, full everyday usability, effortless top performance, and a thrilling driving experience. This results from a relentless focus on minute details by the designers and development and test engineers, and it is perfected over numerous test drives around the world. There is a behind-the-scenes look at development work.

The North Loop (Nordschleife) of the Nürburgring is a legend among race tracks: The 20.832-kilometer course is among the most challenging worldwide. And every single meter is truly a tough challenge: the compression at the Fuchsröhre, the kickbacks at the Karussell, or the jump at the Pflanzgarten. More than 80 percent of the course is driven with full power. With maximum load applied in fast motion, every kilometer on this course equates to multiple kilometers of regular road operation. 8,000 kilometers of endurance testing on the North Loop easily equates to a car’s entire lifetime. With its high demands, the North Loop is the benchmark for every sporty car. If you can survive here, you can survive on the world’s roads.

The North Loop can also tell a knowledgeable driver a lot about an automobile: Its strengths and weaknesses, precise handling to achieve fast lap times, easy controllability at the limit and, most of all, solid quality even in the most challenging conditions. This is why the North Loop is one of the fixed stars in the cosmos of vehicle development and testing at Audi Sport GmbH.

Frank Stippler is one of the people who know the “Green Hell” best. The 45-year-old was born in Cologne and lives in the Eifel region. He is connected with the history of Audi Sport like no other racing driver. His greatest accomplishments include winning the 24 Hours races of Spa in 2012 and the Nürburgring (2012 and 2019). Stippler was part of the team right from the start, when the GT3 racing car Audi R8 LMS debuted in 2009. Aside from his skills as a driver, he also contributed his engineering expertise. Ever since then, it has been hard to imagine the development of customer sport racing cars and even sporty road models without him. This applies to the RS models as well as the R8** high-performance sports car, which was extensively updated at the beginning of 2019 – as Coupé**, as Spyder**, and as an R8 V10 RWD** with rear-wheel drive.

Stippler’s latest coup is a lap record on the North Loop, which he set with an RS Q8** in the fall of 2019. The clock stopped after 7 minutes and 42.253 seconds – attested by a notary – and the racing professional from Cologne had beaten the former best time for standard SUVs by twelve seconds. While the new record was not the aim of the development work, it is nevertheless clear proof of the immense dynamism that Audi’s most sporty Q model has to offer.

Oliver Hoffmann: “The North Loop is the ultimate endurance test”

“The North Loop represents the ultimate endurance test in our development and coordination work,” explains Oliver Hoffmann, Managing Director of Audi Sport GmbH. “Every RS model undergoes at least 8,000 kilometers of testing here. The track provides us with detailed information about the durability of our parts under extreme conditions and specifics about the suspension. With the RS Q8**, our main focus was on the setup of the springs, dampers, and the ESP as well as the performance characteristics of the roll stabilization and the sport differential”

What distinguishes the character of Audi’s fastest SUV? “The RS Q8** combines outstanding performance and extraordinary design along with the power and versatility of an SUV and our extensive quality standards,” Hoffmann explains. “RS vehicles have a strong and unique character: spontaneous maximum performance wherever and whenever desired, and effortless performance on long journeys.” This is important, as many RS drivers use their car every day for business trips and running errands and rack up a lot of kilometers. “An RS is a true Dr. Jekyll and Mister Hyde. It is important for every kilometer, no matter how it is driven, to be an experience. This is achieved thanks to breathtaking design, high-end look and feel, and outstanding quality,” says Oliver Hoffmann, who is also responsible for Technical Development at the Neckarsulm site.

Twelve models in the portfolio: The RS initiative is underway

Future RS models will enhance the range relatively soon after the launch of the respective base product lines. That means that their characteristics will be defined at a very early stage and that their development will run alongside work on the corresponding product line upon which they are based. In addition to design, this work will focus on powertrain and suspension. After all, the aim is to bring the sporty DNA that every Audi carries to the fore as much as possible.

Modern efficiency is one of the fundamental goals here. With the RS 6 Avant**, RS 7 Sportback**, and RS Q8**, the list of ingredients already includes a sophisticated mild hybrid system based on the 48-volt on-board electrical system as well as cylinder deactivation (COD) in the V8 TFSI engine under partial load. Needless to say, these functions must also be implemented in an RS-typical way. “Fine-tuning” is the magic word when it comes to the long road that is the development of a spectacular RS model. “A unique character will only evolve if we work consistently and with great precision. A lot of experience and a clear visionare the keys to creating a coherent overall concept,” says Oliver Hoffmann with certainty.

Around the world 30 times: the testing program for the RS Q8** – and not just this RS

Test engineers from Audi Sport GmbH spent around two years on the road in the RS Q8**, covering more than 1.2 million kilometers, the equivalent of driving around the world 30 times, with development vehicles and prototypes. The test drives took them to Finland, Sweden, France, Italy, South Africa, China, and the USA. They were conducted on all types of racing tracks and roads.

Testing areas like the high-speed circular track in the southern Italian town of Nardò were used to test the resilience of all components at a consistently high speed. The ice and snow in Scandinavia offered ideal conditions for putting the finishing touches to the response characteristics of the suspension and control systems. When driving on a slippery surface, even minor changes to the setup have very noticeable effects. The heat and elevation in South Africa presented the air conditioning, engine cooling, and performance characteristics with special challenges.

Inspired by the racing car: the design of RS models

The RS models are the dynamic spearheads in Audi’s model portfolio, as is already indicated by their particularly striking exterior design. It is very much inspired by motorsports, combining cool understatement with a dynamic edge. Top performance in motorsports requires more extreme component shapes. According to the principle of “form follows function,” it is therefore natural that the use of high-performance technologies from motorsports is also reflected in the visual appearance of RS models.

In many RS models, the proportion and position of the Singleframe are based on the R8** sports car: It is both wider and lower than on its sister models and dominated by a puristic, sporty black instead of chrome elements. Some RS models have horizontal slits between the grille and the hood that are reminiscent of the iconic Audi Sport quattro from 1984. Mighty air inlets and large elliptical tailpipes symbolize the power of the turbocharged engines.

The body also features an exclusive look, which is particularly striking in the Audi RS 6 Avant**. It is 80 millimeters wider than the base model, and the design of the fenders is just as RS-typical as that of the rear doors, the side panel frames, the front section, and the engine hood. Only the front doors, the roof, and the tailgate are unchanged. The wheel arches of the high-performance Avant accommodate wheels with a diameter of up to 22 inches – or even 23 inches in the case of the RS Q8.

Workshops and master jig: Top-of-the-line quality even during development

The Audi maxim of uncompromising quality applies to each of the many exclusive solutions. “Our customers demand the best products on the market,” says the Managing Director of Audi Sport, Oliver Hoffmann. “We have the best specialists and teams to meet their high expectations.” The RS workshops, where the first cars are assembled by hand, play an important part during the development phase.

The Audi Quality Assurance department has a great influence on the later series production vehicle even during this phase. The employees assemble the complete RS body on highly precise aluminum measuring fixtures known as the master jig. They use state-of-the-art measuring methods such as laser scanners, which record several million measuring points on the surface of the part, to adjust all surfaces, joints, and radii down to the tenth of a millimeter. This benefits both the aerodynamics and the appeal of each individual RS.

The marriage, that is the assembly station where the suspension and drivetrain are joined with the body, is very challenging in the case of the models with a V8 engine in particular.
RS-specific parts such as the exhaust system, bumpers, rear aprons, and wheels complete the RS models. A two-digit number of RS 6 Avants** and RS 7 Sportbacks** are built in Neckarsulm every working day. Each one of them is checked on a road course before being handed over to the customer.

The “Böllinger Höfe” factory is located close by the Neckarsulm plant, the headquarters of Audi Sport GmbH. This is where the sports and racing cars of the R8 family** are built, in large part by hand, and the fully electric Audi e-tron GT will soon be built here, too.

Additional information is available at www.audi-mediacenter.com/en/presskits/making-of-rs-12777

Fuel consumption of the models named
(Information on fuel consumption and CO2 emissions as well as efficiency classes in ranges depending on the tires and alloy wheel rims used.)