{{ activeItem() }}
Twitter
09/20/21
Experiencing progress and electrifying performance. The @FCBayern team joined us for an afternoon at the Audi drivi… https://t.co/tpL9flroBT
09/20/21
On the way to its debut in the Dakar Rally 2022. @audisport has tested the Audi RS Q e-tron for almost two weeks in… https://t.co/2RNJldizcI
09/19/21
We can make anything, but whatever we make, let’s make sense. The fully electric Audi e-tron GT quattro. Discover… https://t.co/BgG4mL8rXq
09/17/21
Experience progress at the new #Audi brand exhibition at DRIVE. Volkswagen Group Forum in Berlin. Until 17 January… https://t.co/TT8BV09ciP
Audi on Twitter
YouTube
09/20/21 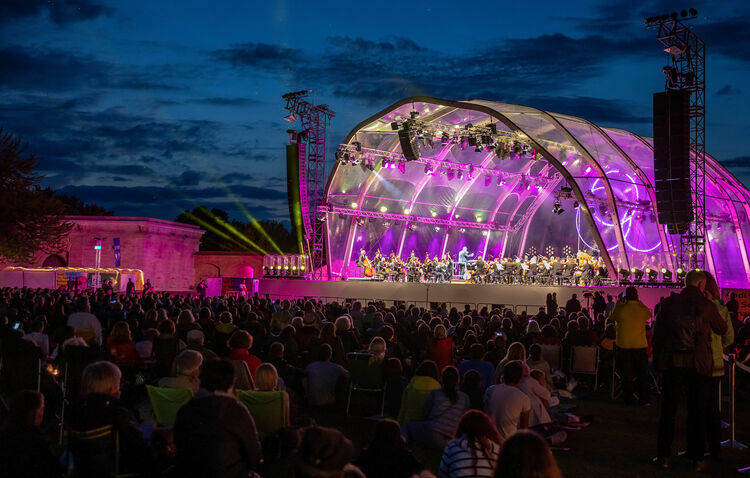 The Audi Summer Concerts 2019 have concluded with the popular Audi Classics Open Air Weekend in the Klenzepark. Under the motto “Fantastique!”, for a period of two weeks the artistic director Lisa Batiashvili brought artists such as Jean-Yves Thibaudet, Nino Machaidze, Gautier Capuçon and Paavo Järvi to the festival concert stages for the first time. Events including Walt Disney’s Fantasia in the hall for employee assemblies at Audi and a concert with talks featuring the musical legend Alfred Brendel in the Audi museum mobile showed new perspectives on classical music in Ingolstadt.

Despite unfavorable weather, some 12,000 loyal fans attended the popular Classics Open Air Weekend in the Klenzepark. On the French national holiday, this large-scale event, which has been held since 2009, Berlioz’ Symphonie fantastique provided the resounding final chords of the two-week music festival, which brought world-famous musicians to Ingolstadt under the motto “Fantastique!”, putting the spotlight on French musical culture.

Lisa Batiashvili, the artistic director of the festival, was able to attract such renowned artists as Jean-Yves Thibaudet, Nino Machaidze, Gautier Capuçon, Paavo Järvi, the Bremen German Chamber Philharmonic Orchestra and the wind soloists Les Vents Français to Ingolstadt. In two concerts, the internationally celebrated violinist Batiashvili took to the stage herself. “It’s my personal aim for the next couple of years to make this festival more international and more exposed, but also to get more awareness from people around the world,” said Lisa Batiashvili, summing up her motivation for the festival.

For her musical achievements, the lord mayor of the City of Ingolstadt, Dr Christian Lösel, honored the artist by entering her name into the Golden Book of Ingolstadt. “Lisa Batiashvili not only accomplishes outstanding work for the Audi Summer Concerts, which have become an indispensable contribution to the cultural life of the city. With her personal connection to Ingolstadt, she is also an international ambassador for our city,” said the mayor at the official ceremony in the historic city hall on Sunday evening.

This year’s Audi Summer Concerts showed new perspectives for classical music in Ingolstadt with concerts in unusual venues such as the special exhibition space in the Audi museum mobile and the hall for employee assemblies at Audi. The sold-out opening event, Fantasia – Disney live in concert, and the popular living-room concerts and discussions with artists confirmed the new direction that the festival took in making classical music accessible and personal.

For information on the Audi Summer Concerts, please see www.sommerkonzerte.de

Media material and a program for downloading are available at:
www.audi-mediacenter.com/de/sommerkonzerte-293