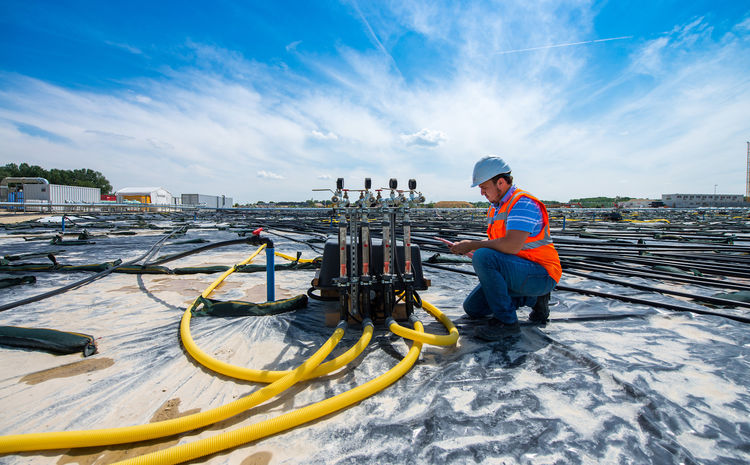 Air sparging – using air to get rid of contaminants: Air sparging is being used on an area of roughly 100,000 square meters (1,076,391 sq ft) to remove highly volatile contaminants from the groundwater and soil. This is currently one of the largest air sparging projects in Germany. Picture: monitoring of operating parameters at the extraction distributor.
Download PDF (72.6 KB)
Facebook
Twitter
LinkedIn
WhatsApp

Remediation of the IN-Campus site is well underway: Specialized teams are working on behalf of IN-Campus GmbH, a joint venture between AUDI AG and the city of Ingolstadt, to pave the way for a new, state-of-the-art business and industrial park by the end of 2022. Together they are recycling and remediating an abandoned 75-hectare industrial site in the east of Ingolstadt. It is one of the largest remediation projects currently underway in Germany.

In-Campus GmbH acquired the former Bayernoil refinery site in November 2015. The site offers numerous advantages, including a continuous area of 75 hectares, its proximity to the Audi plant and good connections to the transportation infrastructure. No new areas will be sealed during construction on the IN-Campus. It is much more the case that the city of Ingolstadt, represented by IFG Ingolstadt, and Audi are breathing new life into a former refinery site.

The city of Ingolstadt, AUDI AG and Bayernoil Raffineriegesellschaft mbH signed the public law remediation contract in May 2016. The primary objective of the contract is to remove pollutants from the soil, soil air and groundwater at the former refinery to provide a healthy atmosphere for the people visiting and working at the mixed commercial and industrial site. The extensive remediation work, which has been proceeding north to south since 2016, is scheduled for completion by the end of 2022. Upon completion, In-Campus GmbH will use 60 hectares of the site as a business and industrial park. 15 hectares of the total area have been designated as compensation area for nature and landscape.

Currently the subsoil is still contaminated by pollutants having different chemico-physical properties. Special methods appropriate for the various contaminant classes are being used to efficiently remediate the site:

Construction of the innovative technology park in the west of the IN-Campus site is scheduled to begin in 2018. This will include the Project House – a four-building complex for some 1,400 experts in the field of new technologies. Completion of the complex is expected by the end of 2020. Additional structures will follow successively. Among the first will be a driving safety center, an IT center and an energy center.

Statements on IN-Campus:
Dr. Christian Lösel, Mayor of the city of Ingolstadt “A high-end technology center for groundbreaking technologies and innovations is gradually being built here. I am particularly pleased that an important building block for the future of Ingolstadt is finding a home following extensive remediation of the former refinery site. That is a win for the city and the environment.”

Thomas Vogel, Managing Director of IN-Campus GmbH (AUDI AG): “I see the project as a tremendous opportunity. By developing this site, we are making an enormous contribution to the region and to the future viability of Ingolstadt as a high-tech site.

Norbert Forster, Managing Director of IN-Campus GmbH (IFG Ingolstadt): “IFG has already partnered with AUDI AG to build the Logistics Center, one of the most advanced in Europe. With the IN-Campus project, we are setting another milestone in the area of digitalization and innovation.”

Klaus Mittermaier, Chairman of the General Works Council of AUDI AG: “The sustainable remediation of the site is a logical step toward the future. An industrial wasteland is being transformed into an innovative industrial site that can secure jobs in the region and also equalize infrastructure in Ingolstadt.”

Dr. Rüdiger Recknagel, Head of Environmental Protection at AUDI AG: “We are proud to be conducting the first comprehensive remediation of a refinery site in Bavaria with this eco-friendly remediation project. In so doing, we are giving something back to both society and nature.”