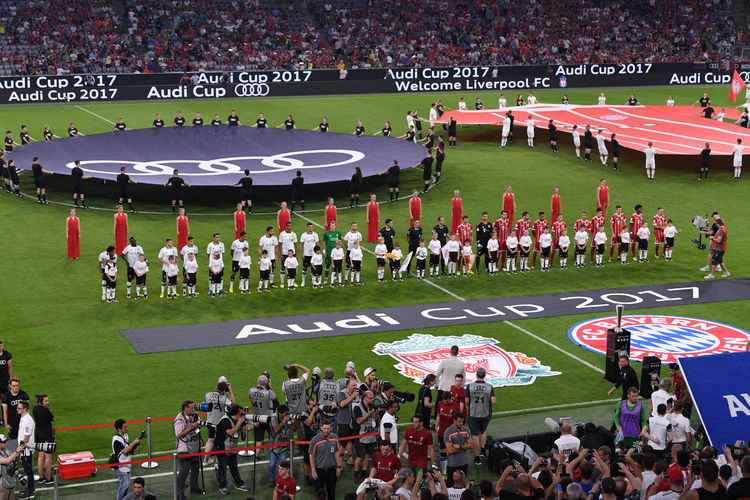 Thrilling football matches with six goals – match day one of the Audi Cup 2017 inspired the fans in the Allianz Arena. Atlético de Madrid and Liverpool FC won the two semi-final games. The final is held for the first time without the participation of the hosts FC Bayern München.

In high summer temperatures of 35 degrees Celsius, Atlético de Madrid and SSC Napoli staged an entertaining clash in the first semi-final. José Callejon’s beautifully taken volley saw Napoli take the lead (56th minute). Thanks to goals from Fernando Torres (72) and Luciano Vietto (81), the Spanish capital club turned the game in its favor. The objective evaluation system Audi Player Index elected Jan Oblak as Man of the Match. The goalkeeper from Madrid saved a penalty (34) in the first half.

In the game between FC Bayern München and Liverpool FC, the Premier League club retained the upper hand. Sadio Mané (7), Mohamed Salah (34) and Daniel Sturridge (83) ensured the 3:0 final score. The Bundesliga record champions, for whom newcomers Corentin Tolisso and James Rodríguez played from the beginning, missed taking a place in the final for the first time after claiming three tournament victories. Man of the Match was Bayern’s defender Javi Martínez.

On Wednesday, FC Bayern München meet SSC Napoli first of all in the third place playoff (kickoff 17:45). The Audi Cup final kicks off at 20:30 between Atlético de Madrid and Liverpool FC. Das Erste is on air from 17:35 and broadcasts both matches live, several tickets are still available online and at the ticket office.

The Audi Cup also had plenty to offer aside from the two semi-finals. In the Audi Intelligence Court on the Esplanade, visitors could check their own football performance. They played two-a-side on a small pitch. In this case, a special tracking system similar to the Audi Player Index records the individual performance data of the players and summarizes the data as a figure at the end of the match. Motorsport fever was evident at Audi #SuperQ. Using virtual reality technology, former FC Bayern München player Dietmar Hamann and ex-Audi factory driver Dindo Capello raced in a simulator against Rallycross World Champion Mattias Ekström. The Swede set a target time before the Audi Cup on a real race track.