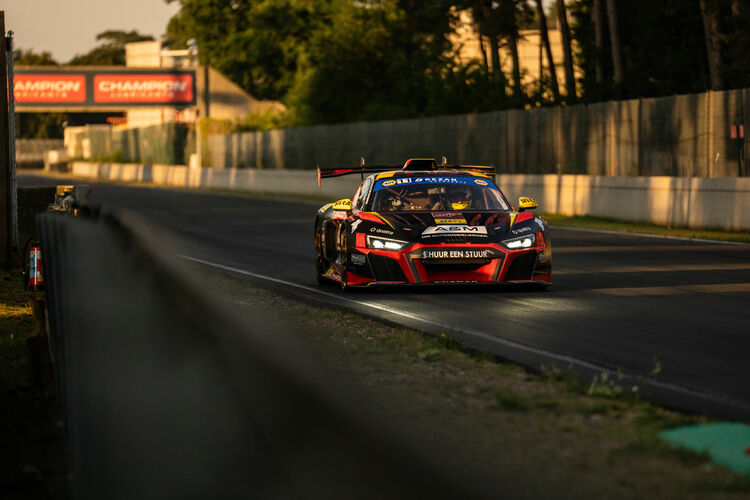 The first overall victory of the Audi R8 LMS GT2 in a 24-hour race marked the second weekend in August as did GT3 successes and a successful debut of the Audi RS 3 LMS gen II in the Baltic States.

Strong team performance in Belgium: Team PK Carsport won the Zolder 24 Hours, the fourth round of the Belcar Endurance Championship, with the Audi R8 LMS GT2. The four Belgian privateers Peter Guelinckx, Bert Longin, Stienes Longin and Nicolas Saelens received support from their compatriot and Audi Sport driver Dries Vanthoor. Throughout the race, they fought a duel with the Porsche of Team Q1 TrackRacing. No fewer than 25 lead changes characterized the endurance race. In the second hour of the race, the Audi privateer team had a three-lap deficit but worked its way back to the front by the sixth hour. The breakthrough came with a strong drive by Dries Vanthoor on Sunday morning in the course of which he set new lap records several times with the Audi R8 LMS GT2. After 3,088 kilometers driven, the team celebrated a special victory in more ways than one: After the Belgian squad had been the first team to contest a 24-hour race with the GT2 version in Dubai in January and won its class, the success at Zolder marked the first overall 24-hour victory for the Audi R8 LMS GT2. For Audi Sport customer racing, it was the third triumph in a GT category at this race that has been held since 1983. In 2011 and 2012, the GT3 version prevailed there. Dries Vanthoor, who hails from Zolder, was delighted with his third 24-hour overall victory this season at his home race. The 24-year-old junior driver was part of the fastest driver line-up in Dubai in January and won the Nürburgring 24 Hours with his teammates in May. Finally, privateer driver Bert Longin has moved to the top of the statistics at the Zolder 24 Hours. Exactly 20 years after his first success in this classic, he stood at the top of the podium for the seventh time. This means he now records one more success than Marc Goossens and Anthony Kumpen, who was active as a driver back then and is Longin’s team boss today.

Opening success in China: The FAW Audi Racing Team won the first race of the new season in the China GT Championship at the Ningbo race track. Audi Sport Asia driver Cheng Congfu and his teammate Chris Chia prevailed against five other brands in the first one-hour race. Cheng had started from pole position and built up an eleven-second advantage by the mandatory pit stop. Amateur driver Chia took over the Audi R8 LMS at the driver change and crossed the finish line with a lead of 5.6 seconds. In the second race, Chia drove the start and handed his car over to Cheng in second position at the stop. The pro driver attacked the leader but could not find a way past and eventually finished the race in second position. This puts the driver duo in the lead in the championship standings after the first of six events.

Unbeaten again in Norway: On the fifth weekend of the Norwegian Racing NM championship, Wiggo Dalmo dominated his class as before. The Audi customer won his classification in all three sprint races on the Rudskogen circuit about 90 kilometers south of Oslo. In the first competition, the Audi R8 LMS was 1.1 seconds quicker than the second-placed Corvette, in the second race Dalmo established a lead of 21.8 seconds and in the third race even 40 seconds.

Successful debut in Estonia: The Audi RS 3 LMS gen II immediately clinched three podium places in its first outing in the Baltic States with Team LV Racing. Ivars Vallers/Valters Zviedris started the weekend with a third-place finish in the six-hour endurance race of the BEC6H series at the Parnu circuit. This was followed by two sprint races in the BaTCC racing series. In the first competition, Ivars Vallers secured victory in the TCR classification as third overall behind two GT race cars. In the second race, the Latvian finished second in this class.