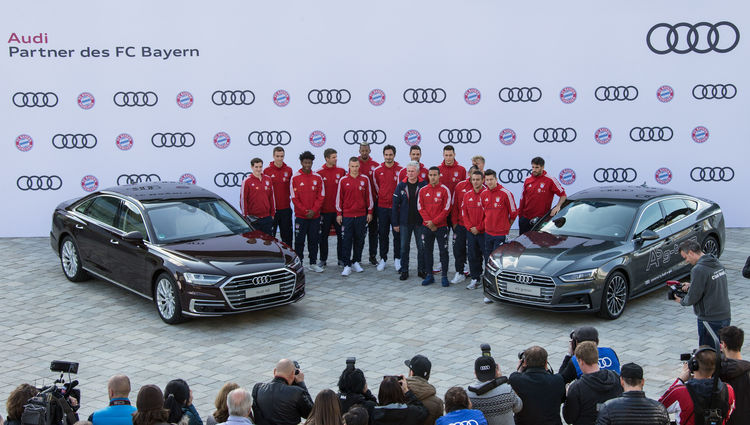 FC Bayern München continues to drive cars from Audi. Players and coaches of the international top-flight club used the international cap break for a visit to Ingolstadt this Wednesday to pick up their new “company cars” at the Audi Piazza.

For the squad around Thomas Müller, Mats Hummels and Robert Lewandowski, the visit to their long-standing vehicle partner Audi was an event on home soil. The soccer players from Munich are now in their 15th season of driving cars of the premium brand. Hundreds of fans from the region and numerous Audi employees gave the players an enthusiastic welcome. Group photos, selfies and autographs were followed by a plant tour for the team.

FC Bayern München and Audi have been forming a team since 2002. Highlights of the partnership include the Audi Cup, which has been held every two years since 2009 as a preparation tournament at Allianz Arena, or the Audi Summer Tour. This summer, the brand accompanied Bayern’s training camp in China and Singapore. There the squad played against AC Milan, Inter Milan, FC Chelsea and Arsenal London.

Video footage will be available at www.audimedia.tv from 18:30 CEST.

*Information on fuel consumption and CO2 emissions as well as efficiency classes for range widths depending on the tires/wheels used and on the transmission version.