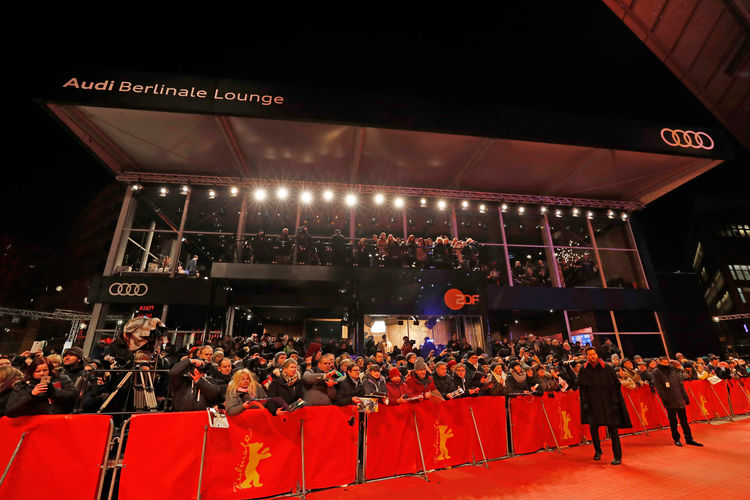 More than 350 films, almost 500,000 visitors and a multitude of stars: this year’s 68th Berlin International Film Festival is once again attracting film buffs from all over the world to the German capital. Experience the Berlinale yourself at the Audi Berlinale Lounge located directly on Marlene Dietrich Platz. Together with the Berlinale, Audi will be presenting an extensive cultural program in the two-storey pavilion from February 15–24, including talks, concerts, screenings, lectures and interactive workshops.

Audi has been the main sponsor of the Berlin International Film Festival for five years now. The film industry celebrities will be chauffeured to the red carpet in the new Audi A8*, the new Audi A7* and the Audi Q7 e-tron*. Audi invites film buffs, journalists and fans of the arts to the Audi Berlinale Lounge, which is located right next to the Berlinale Palast. There is no charge to enter the temporary building and enjoy its elegant ambiance. “Audi has long been intensively involved in the world of cinema and the company supports many artists and productions. Going to the movies is still a special experience for film buffs, even in the digital age,” says Jason Lusty, Head of Marketing Germany at AUDI AG. “We share this enthusiasm and so we are giving all visitors direct access to the Berlinale with our Berlinale Open House event format.”

The Berlinale Open House presents exclusive talks and panel discussions in which experts examine cultural issues.Film experts discuss topics such as storytelling in animated films or what car chases will look like in the future, when cars can drive autonomously.Visitors can also learn more about the power of body language or the craft of filmmaking in workshops.In the evening the Berlinale Lounge Nights provide a relaxing way to end the day with concerts and a film quiz.The highlight of the program is an evening focused on the cult series Breaking Bad.

Audi also demonstrates its commitment to the cinema with its “Berlinale Shorts” section, where the brand will for the fourth time present the Audi Short Film Award, along with EUR 20,000 in prize money. The films included in the “Berlinale Shorts” can’t be classified into any single genre. “The contributions represent great variety and diversity – a spirit of innovation. They are touching as well as gripping – they trigger emotions and move us. Movement is the future,” Jason Lusty says. “We want to motivate directors with this award to persist with this passion for innovation.”

Audi will also present a special warmup event for the Berlinale one day prior to the official opening on February 14.As part of the Audi Zeitgeist Projects, Audi e-tron will present the “Symphony of Now,” a cinematic love letter from director Johannes Schaff to the capital city.Now, 90 years after Walter Ruttmann's “Berlin: Symphony of a Metropolis,” Schaff takes up the avant-garde approach of this classic film.His homage is backed by the sounds of such musical greats as Gudrun Gut, Modeselektor and Hans-Joachim Rodelius.The artists will be present live during the the film’s premiere, creating a one-of-a-kind experience.Details can be found at https://www.audi-zeitgeist-projects.com/.

The Audi Berlinale Lounge opens on February 15 at 7 p.m. and is open daily from 2 p.m. to 12 midnight until February 23. The lounge will close on February 24 at 8 p.m. Visitors who want to experience the Berlinale atmosphere in the morning are invited to Red Carpet Yoga with Steph Jaksch, being presented for five days at 8:30 a.m. Yoga to invigorating Deep House-style music as well as juices and breakfast bowls guarantee a perfect start to the day (February 16 and February 20–23. Register on Facebook at deephouseyogaofficial).

Tickets for the films of the 68thBerlin International Film Festival will be available daily starting February 12 from 10 a.m. to 8 p.m. at the Berlinale box office in the Audi City Berlin (www.audi.de/berlinale).