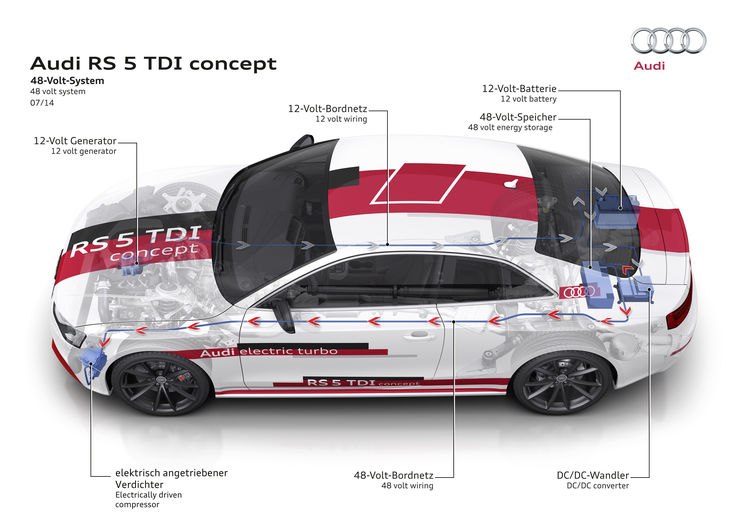 Audi is to upgrade part of its vehicle electrical system from twelve to 48 volts. The move represents another technical building block for facilitating the integration of new automotive technologies while increasing the power and efficiency of its cars.

“We are using the full bandwidth of electrification in our drive principles strategy. Running part of the vehicle electrical system at 48 volts plays a central role in this,” commented Prof. Dr. Ulrich Hackenberg, Member of the Board of Management for Technical Development at Audi. “It enables us to make more energy available. That paves the way for new technologies with which we can make our cars more sporty, more efficient and more convenient to use.”

Audi recently showcased the scope of the 48‑volt electrical system with the technology demonstrators Audi A6 TDI concept and RS 5 TDI concept. Both models are fitted with an electrically powered compressor. This operates independently of the engine load and therefore fundamentally improves the acceleration performance. 48‑volt technology is moreover ideal for realizing convenience systems for dynamic chassis control. Audi will shortly be unveiling a variety of applications in this field.

The current state of the art technology has taken 12‑volt electrical systems to their very limits. Especially at low temperatures, all the various static‑load consumers can account for the entire power generated by the alternator, which can deliver up to three kilowatts. The battery power is no longer capable of meeting the demands of new, dynamic‑load consumers such as high‑performance electric compressors.

The solution is a second subsidiary electrical system running at 48 volts, to complement the 12‑volt power supply. The higher voltage means smaller cable cross-sections are needed; this translates into lighter cable harnesses with lower power dissipation. The 48‑volt electrical system features new storage technologies and delivers much more power than the 12‑volt system with lead batteries. That makes it an important element of the Audi strategy of electrifying various stages of the drivetrain. The Group’s developers have already come up with a scalable platform concept, including a version that incorporates the electrically powered compressor.

In currently the highest development version, a compact lithium‑ion battery supplies 48 volts as the energy source during engine‑off phases; a DC/DC converter integrates the 12‑volt electrical system. The lithium‑ion battery operates in conjunction with a new, efficiency-optimized alternator that qualifies the drivetrain as a mild hybrid. Within this concept there are diverse ways of starting, controlling and deactivating the combustion engine as needed. The powerful alternator achieves an energy recovery output of ten kilowatts, far more than is possible at present. That adds up to a saving of up to ten grams of CO2 per kilometer (16.1 g/mi), equivalent to around 0.4 liters of fuel per 100 kilometers (62.1 miles).