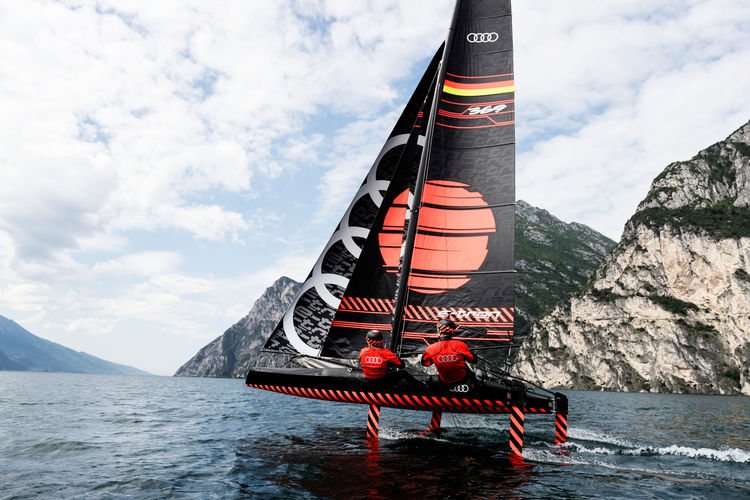 For Kieler Woche 2018 there will again be sporting highlights to marvel at. At the Olympic sailing competitions Johannes Polgar (Olympic participant 2008 in Beijing) and Carolina Werner (Olympic participant 2016 in Rio) will sail in the new Olympic discipline Nacra 17 with their new designed boat. The design of the Foiling Nacra 17 catamaran was created by Marc Lichte and Marco dos Santos from Audi Design.
Download PDF (164 KB)
Facebook
Twitter
LinkedIn
WhatsApp

Audi will once again be there as premium partner at the Kieler Woche Regatta from 16 to 24 June 2018, with a focus this year on sustainability. The premium manufacturer is presenting its efficient catamaran in the Nacra 17 category with special Audi e-tron design at the world’s largest sailing regatta, thus underlining its dedication to electromobility. In the Nacra 17 class, both hulls of the boat are lifted clear of the water. This results in less drag and consequently less use of energy while achieving the same high speed. Johannes Polgar and Carolina Werner of the Audi e-tron sailing team will be there setting a course for the Olympics in their Nacra 17 catamaran.

When it comes to alternative and sustainable forms of propulsion, competitive sailing has few equals. The new Nacra 17 catamarans are particularly environmentally friendly without compromising on performance. The 2020 Olympic Games in Tokyo will see boats of this class in action for the first time in a new Olympic discipline. The design of the catamarans allows not just one but both hulls to be lifted clear of the water. This means that less drag is produced, resulting in higher speeds with less use of energy. With the foils lifted out of the water, the catamaran can fly over parts of its surface at speeds of up to 28 knots (over 50 km/h).

Visitors to the 2018 Kieler Woche Regatta will be able to see the Nacra 17 in action before its Olympics debut. Johannes Polgar and Carolina Werner will be in Kiel competing as the Audi e-tron sailing team. Polgar will actually be there in a dual role – as event and sports marketing representative of AUDI AG and as a sailor who has already competed at the Olympics Games. He and Werner, the bowman of the team, will be on the starting line at Kieler Woche in the “Nacra 17” Olympic discipline. Werner is an Olympian herself, having competed in Rio de Janeiro in 2016. With their foiling Nacra 17 catamaran, the Audi e-tron boat, the pair will use Kieler Woche to set a course for the Olympics in 2020. If they make it to Tokyo, they have their eyes fixed on winning a medal.

Marc Lichte, Head of Audi Design, and Audi designer Marco dos Santos were responsible for the look of the Audi e-tron boat. Using the visual motif of electrification, the design tries to convey the high-voltage drive used in electric cars. The new boat design was modelled on the camouflage appearance of the Audi e-tron all-electric SUV prototype. “We were looking for new and interesting ways to illustrate the underlying technology,” explains Marco dos Santos. “The design sends out a clear message: Audi is ready for the all-electric journey in 2018,” adds Marc Lichte. “We have electrified the well-known Audi e-tron logo and are opening a new chapter in the history of Audi. In line with the motto ‘as little as possible, as much as necessary’, the design strikes a perfect balance between pattern and aesthetics.”

As well as the Nacra 17 catamarans, visitors to Kieler Woche 2018 will be able to watch other Olympic sailing classes in competition and experience a whole host of sporting highlights from the Welcome Race and the European Para Sailing Championship to the Laser Radial World Championship for male competitors.