Discover vintage vehicles from Audi Tradition on the road 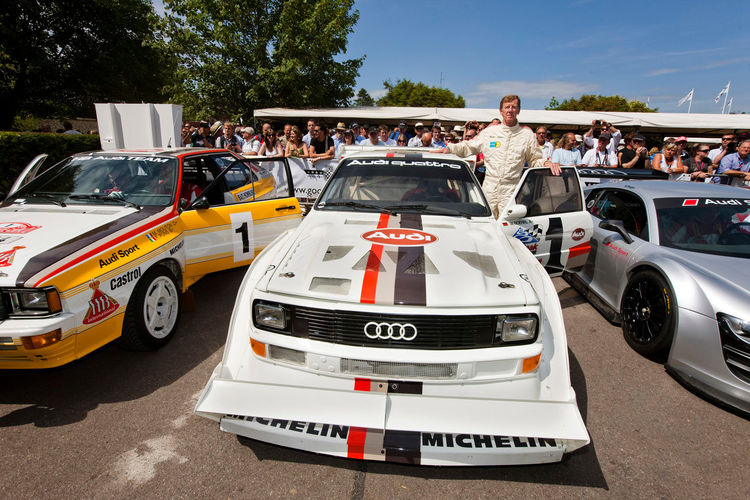 Audi Tradition starts 2017 with full steam. This year, car lovers can experience historic vehicles at more than 20 national and international events throughout Europe. The highlight for all fans of the great Audi rally age will most certainly be two-time world champion, Walter Röhrl, once again engaging the gears of his legendary Audi Sport quattro S1 Pikes Peak at the Festival of Speed in Goodwood (June 29 to July 2).

The annual program will kick off with the vintage car show, Techno Classica, in Essen (April 5 to 9). The Audi stand in Hall 7 bears the motto "NSU – a new way to drive". Audi Tradition will only be exhibiting vehicles from NSU, the brand that preceded Audi. Among them will be the design icon, the NSU Ro 80. This model series was launched on the market 50 years ago. Audi Tradition will be presenting two cars from this series, one built in 1967 and the other in 1977. Furthermore, visitors to the Audi stand will see an NSU Prinz 30 (built in 1962), an NSU Sport Prinz (built in 1964) and an NSU 1000 TTS (built in 1970). The organizers of the world's largest vintage car show are expecting 180,000 visitors in Essen.

The hearts of Audi rally fans will beat faster at the Goodwood Festival of Speed (June 29 to July 1). A motorsport legend will be taking up his seat in an Audi: Walter Röhrl, considered to be the greatest rally driver of all time. The 70-year old won the rally world championships in 1980 and 1982, before going on to have an unforgettable moment in his great career when, in 1987, he triumphed in record time at the Pikes Peak race in the USA behind the wheel of an Audi Sport quattro S1. 30 years later, in the very same vehicle, Walter Röhrl will drive up the mountain at the world's largest event for historic motorsports. Röhrl explains: "I'm looking forward to sitting in the Audi Pikes Peak again. Being able to drive the vehicle at Goodwood is really something special."

This year, the most powerful of all Auto Union Silver Arrows, the Auto Union Type C racing car, will be taking up its place on the starting line of two events. The car's 16 cylinders will be demonstrating their power in the mountains at the Großglockner Grand Prix (September 21 to 24). In the 1930s the Auto Union racing drivers climbed to the summits with great success at the then popular mountain races. The most successful of all was Hans Stuck, who, as a result, was given the nickname "The Mountain King". His son, Hans-Joachim Stuck will be following in his father's footsteps at the Großglockner event. The former Formula 1 driver says: "Driving in this car, following in my father's footsteps, is very emotional for me." The Type C from 1936 will demonstrate the power of its 520 hp at the Classic Days at Castle Dyck (August 4 to 6). At the "German equivalent of Goodwood", Audi Tradition will be presenting, amongst other things, one of its oldest exhibits, the Audi Type C "Alpine Victor" from 1919.

Both the Danube Classic (June 22 to 24), which takes place in and around Audi's Ingolstadt site, and Heidelberg Historic (July 13 to 15), which takes place close to Neckarsulm, are permanent fixtures in the Audi Tradition event program. This year, predominantly NSU vehicles will be starting at both events. In the meantime, Audi Tradition is also well-established at the Sachsenring Classic (June 16 to 18), where mainly classic motorcycles pull up to the starting line of the historic route. The brand with the four rings will also be showing its colors at Bodensee Klassik (May 4 to 6), Sachsen Classic (August 17 to 19), the Kitzbüheler Alpenrallye (June 7 to 10), Schloss Bensberg Supersport Classics (July 1 to 3) and the Gran Premio Nuvolari in Italy (September 14 to 17). The model car collector's market at the Audi Forum in Ingolstadt (December 3) will round out the season.