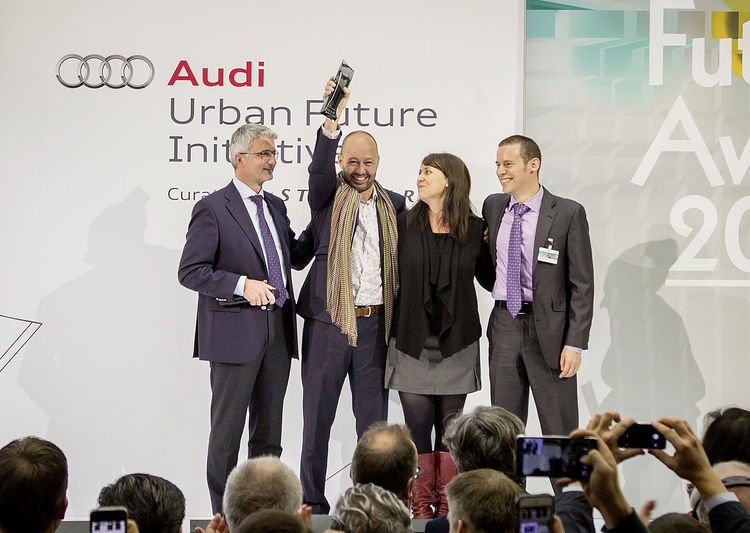 The winners of the third Audi Urban Future Award are now known: The Award, at 100,000 euros the world’s highest-value prize for innovative mobility solutions, goes to Mexico City. The competition team headed by the renowned architect and city planner Jose Castillo impressed the international jury with its “operating system for urban mobility.” Its heart is a data platform with which cities can design their transportation planning according to needs and drivers can flexibly adapt their behavior to the latest situation. Under the motto “the next leap in mobility,” four interdisciplinary teams from Berlin, Boston, Mexico City and Seoul competed for the Audi Urban Future Award with their innovative ideas on tomorrow’s mobility. “The two mega-trends of urbanization and digitalization will radically change mobility in large cities,” explained Rupert Stadler, CEO of AUDI AG, at the Award presentation in Berlin.

A nine-strong jury with an interdisciplinary composition assessed the proposals made by the competition teams according to criteria such as innovative power, feasibility, sustainability and transferability to other cities. Experts from China, Germany, the United Kingdom, Columbia and the USA were represented on the jury. It was chaired by the director of the Centre for Mobilities Research at Lancaster University, Prof. John Urry. “The teams’ ideas were as diverse as the cities that they come from. There were exciting approaches in all the proposals,” Urry stated in Berlin. “Ultimately we decided in favor of Mexico City because the project is already being implemented, and it provides concrete and above all affordable solutions for the urgent mobility problems in the mega-cities of threshold countries.”

The internationally renowned architect and urban planner Jose Castillo and his Mexican team are convinced “that the automobile can solve precisely the problems that it caused itself” – by, for example, providing data with which cities can manage their traffic planning better. According to the IBM Commuter Pain Index, Mexico City is the “most painful commuter city in the world.” In response Castillo, in collaboration with the IT expert Carlos Gershenson and the head of the city’s innovation laboratory, Gabriella Gomez-Mont, has developed an “operating system for urban mobility.”

The winning team in the Audi Urban Future Award 2014 puts its faith in encouraging self-help by making commuters into data donors. At the same time it tests new forms of cooperation between companies, mobility providers and municipal institutions: In addition to Audi, many companies and organizations have cooperated. An initial version of the new data platform has been online since September. Commuters can share data on their own movements with other users through a website and an app. In this way a valid database for sustainable urban and transportation planning is gradually created. As soon as enough real-time data for precise forecasts are available, people can adapt their behavior to the forecasts and thus influence the traffic themselves – by departing later or by choosing the mode of transportation that gets them to their destination quickest.

“The team from Mexico City has succeeded in collecting reliable data in a user-friendly way. On the basis of these data, in future we can develop tailor-made mobility services,” explains Annegret Maier, head of Data Intelligence at Audi. Maier is a member of the Audi Urban Insight Team, which has worked closely with the teams competing for the Award in recent months. Audi experts from different development departments regularly exchanged ideas with the teams and advised them on subjects such as design, piloted parking and driving, and networked mobility.

Today Audi is already developing technologies that give more space back to the city and more time and better quality of life to its residents. Take the example of parking space: parking garages can accommodate two and a half times more cars if those cars autonomously park themselves. Audi has already made the technology of piloted parking ready for market. More space in cities is also created by assistance systems that optimize traffic flow by avoiding sharp braking, support the driver when changing lanes or calculate the ideal speed for the distance to the next traffic light. Today already, technologies such as car-to-x or car-to-car communication can make a contribution to using the road capacity better.

A quantum leap in mobility happens wherever the car is networked even more closely with the city. This is evident in every team’s contribution to this year’s Audi Urban Future Award. “Our vision is to transform urban mobility into a flexible system guided by goals, by making all modes of transport interlink seamlessly. In this way the residents always get the service that is best for them individually,” explains architect and team head Max Schwitalla, who aims to implement his ideas by connecting the Urban Tech Republic on the site of Tegel Airport to the mobility network in Berlin.

The Boston team that competed for the Award, headed by Philip Parsons, formerly dean of Planning at Harvard University, has conceived a “multimodal marketplace for mobility.” It is founded on highly complex simulation software that makes it possible to calculate the opportunities for new technologies and provides a transparent basis for investment decisions. When the developer building a parking garage realizes how much smaller his real estate can be planned, thanks to self-parking cars, the foundation for new business relationships is laid.

The range of opportunities offered by autonomously driving cars inspired the designer Sung Gul Hwang and his team from Seoul. Their proposals are based on ethnographic studies in the trendy Gangnam district. The car can be transformed as desired into a traveling interface to the city, a virtual space for experiences or a social urban device that rewards the driver for environmentally aware or socially responsible behavior.

Many of these ideas still lie in the future. But much is already possible today. “Audi Connect,” for example, already serves as a communication center in the car. And the Audi hold-up pilot, which is close to readiness for series production, will soon take over the controls on highways in slow-moving traffic at speeds up to 60 km/h.

The insights from the third Audi Urban Future Award will flow directly into Audi’s new “Urban Agenda.” In order to implement sustainable mobility solutions, Audi is pressing ahead by forming development partnerships with cities.